☰
Home > Ironman Training > One Down Four to Go

One Down Four to Go

My first week back at training is done! I’m exhausted!

We’re under control and on plan, but I really need all the rest I can get right now. I feel it if I go anywhere below 7 hours sleep and notice the benefits when I’m over 8 hours. There’s no room to shirk on those commitments if I want to get through it all. Not too successful on the naps yet, but sleeping well at night. I didn’t break a few days blog silence to discuss my sleep habits though.

Instead I’ve plotted a graph and have some thoughts to go with it. Yes, this is a straight up training analysis post! 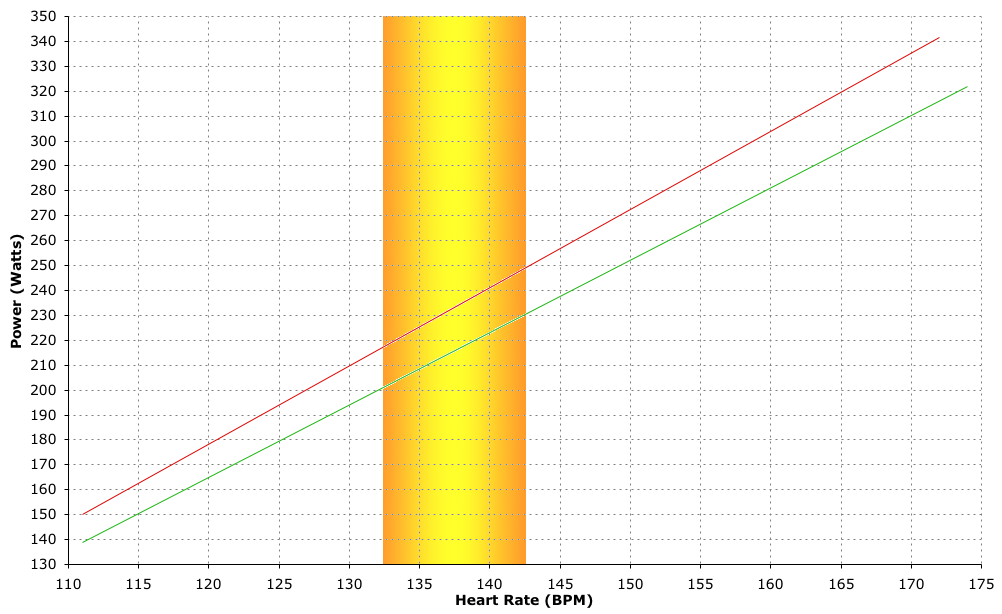 If you follow this blog then this graph has come up before. It’s my average power at varying heart rates. Measurements like FTP and training with power on the bike tend to lead us away from heart rate as a metric. Power isn’t normally available to me during a race though so I find it useful to track the two and have an idea of what I’ll be capable of on race day. Of course an affect of increased fitness will be higher power at a lower heart rate anyway. I’ll be working less for the resulting power.

There are two lines on the graph. The red line is the Power:Heart Rate relationship prior to Roth. I’ll admit now that the data sets used for this were spread out an a little erratic. It was a new idea at the time. The green line is the Power:Heart Rate distribution from my rides the past week. I guess it’s obvious the difference is that currently I’m 15-20 watts down on what I was prior to the break.

The aim over the next few weeks is to raise that green line up to the level of the red. I’d say above the red if I had any certainty of achieving that in a month. That highlighted range of heart rates, roughly 132-142 BPM is critical as this is where I expect to be racing. The higher the power I generate in that range the faster my bike whilst still being in shape to run well.

Whilst I’m sure sample size may have an influence what we’re seeing there is the de-conditioning caused by a total break. I don’t need to go back over how important that break was for me, but this side effect wasn’t unexpected. I’ll admit to an element of uncertainty as to how rapidly I can get back to my ‘old self’. Anecdotally as the week has gone on my riding has felt better. I’ve certainly worked hard and had two or three very solid rides in the past few days.

I’ve not produced a graph for it, but to test the theory I compared Power:Heart Rate ratios from the first three rides this week with the last three. The result is that at least below heart rates of 140 BPM my power output has already improved. Above that though we still have plenty to do! The important thing is that in a matter of seven days I’ve already started to move things in the right direction.

It makes me optimistic that fitness will return quite quickly with some work. I’ll be plotting that graph out weekly to closely track the changes so will really see how things progress. I’m also trying to be very focussed whilst on the bike, working to paces and heart rates in a very structured way. Intervals, hill repeats and lots of solid paced work will be my friends till Kona.

At some point I want to properly visit the topic of aerobic decoupling. To summarise briefly it’s a comparison of the average Power:Heart Rate for the first and second half of a ride. Decoupling refers to a change in those ratios, for example fatigue raising the heart rate or lowering the power produced over time. Good endurance produces a smaller de-coupling as you’re better able to sustain your effort.

Joe Friel typically talks about good endurance giving values below 5% for this ratio. In other words a well trained athlete shows at most a small amount of decoupling. When I first learnt of this I was surprised to discover many of my rides had slightly negative values. Unless I’m mistaken I’m tending to ride harder for a lower heart rate in the second half of the ride!

It’s interesting in that it tallies with my perception of many of my rides. Particularly on longer sessions I’ve often felt it took an hour or two to ‘warm up’ and get into things. Searching found a brief comment on Friel’s blog. It appears negative values indicate that power is coming into line with heart rate after starting erratically. Not sure why I have a slight tendency towards this, Friel does mention caffeine!

I bring this topic up here because this past week the value has been particularly low. Often down around -10% where previously I might typically see it around -1% for a long ride. To me that implies that my heart rate is taking quite a while to settle and starting out each ride much higher than normal.

Again my perception has been that my heart rate is higher and more dynamic than it’s been in a while. By this I mean I’m better able to raise it to its highest levels than I have been in a while (see previous posts about low heart rates). So perhaps these low de-coupling values are a result of this more dynamic heart rate and a longer period before it settles? It may warrant it’s own graph at some point!

It’s not all about the bike though and there’s two other sports that factor into the total work. I mentioned how I’d got myself in the pool sooner than originally planned. So far I’m glad I did as my swimming seems erratic in quality. Earlier in the week I had a couple of decent sessions, but performance is tailing off a little. More than likely fatigue, but I’m keen to keep consistency as a major focus. My time in France is likely to see a reduction in overall swim time so it’s important to be getting good training in now.

Whilst I can’t report impressive results in the water, running is returning to form rapidly. The first and second time certainly tested me more than expected, but I’d say I’m already back to my steady pace. Makes me wish I had a bit of high tech equipment on the run to compare heart rates and pacing. Perhaps I’ll find the money at some point!

I’ve settled into running daily, the usual minimum of thirty minutes. It’s working well. Strength and fitness have returned. Admittedly my 90 minute run yesterday left me feeling pretty worn, but they may have been due to the stomach issues! I’ll hit the two hour plus long runs in the next week or so. They’ll also be a bit of experimentation with double run days.

I’m confident that right now I’m not far off the condition to replicate my last pair of Ironman runs. I have to admit I’m not sure of the best way to progress from a 3:10 IM marathon to a 3:00! I’m going to do a more detailed running post in the coming week to consider this. So whilst I’m experimenting with a few things in this training block I’m not really aiming to achieve any kind of breakthrough. I need more time to think it through and come up with a strategy! Input is welcome on this one.

There are four more very solid weeks lined up ahead of me. Whilst I’ve seen how quickly I can return to training from a lay off I’m well aware this isn’t going to be easy. Right now it’s manageable, but I suspect that if I let things get on top of me, slip behind on recovery, I could easily be derailed. I’m committed and will keep working at it. Tracking things closely so I can pre-empt problems and tow the line.