I’ll try and keep this coherent, but I’m writing this in between my easy day training sessions. The great thing about training camps, even when you’re on your own is they take you away from so many of the distractions. Life is much simpler – eat, sleep and train. Just an occasional break to write something about training from four or five days ago. 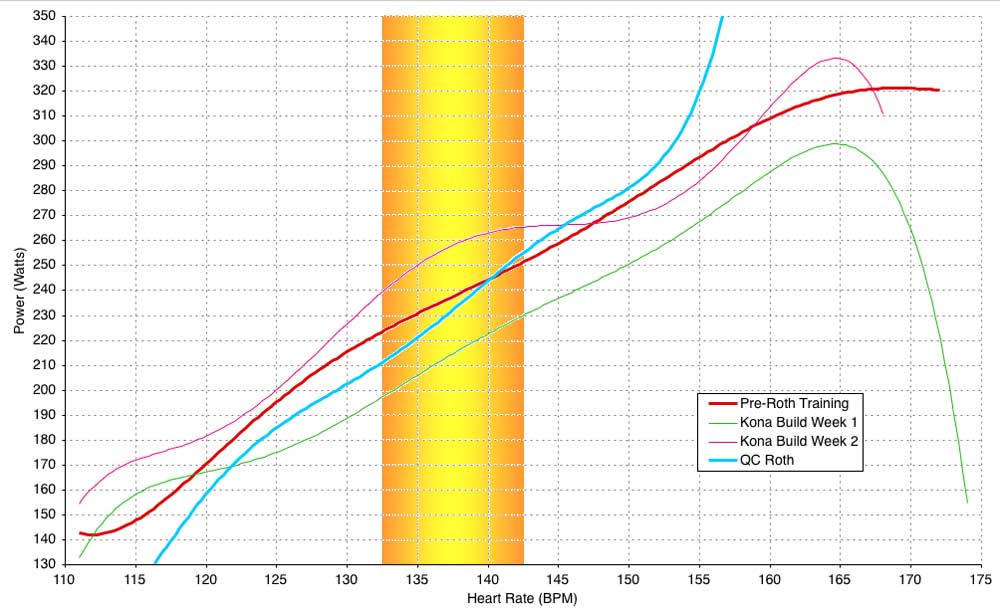 So back to the graph. I’ve added on week two and you’ll notice a couple of other changes. The data from my race in Roth is there and the lines are curvy! I’ve opted to use a polynomial regression as I was curious to see how things varied over the range of heart rates. I’m going to put a huge caveat in now. Looking at this data and also week three’s data I have to emphasise this is really rough statistical territory. Those plots are using Excel’s polynomial trend line function, it’s not cleverly planned. Data sets are relatively small and potentially easily skewed. The figures are there as a rough guideline for me.

If you accept all that, what do you see? Firstly right up to the 145 BPM mark I’m putting out more power than in the previous week and training/racing blocks. A good sign right? To an extent I think so, it indicates a return to fitness. My perception is that cycling isn’t such an effort as in the first week and I was able to put in some solid sessions on hills working in the 230-250 Watt region. I’m pretty happy seeing that.

I don’t want to jump ahead of myself, but data from week three made me reconsider some of this analysis. To an extent the shape and nature of the curve is very much determined by how I structure my training that week. How much it reflects the way I train versus fitness is something I don’t have an answer for yet. Over time I would expect to see trends reflecting changes in fitness, but individual weeks may be too small.

Week two was much more structured than week one. I approached the bike with more hill repeats and deliberate efforts and less general riding. Part of this results in there being more data for certain heart rate regions than others. You’ll notice that in the second week I’m outputting higher power for lower heart rates and for the very highest heart rates. The hill I used to train favours a fairly steady rate of work and finishes with a punishing last kilometre. How much of the division comes down to that?

Another piece of information to note is the average heart rate for week one and two data. For week one it was around 120 BPM, but week two drops to 111 BPM! Now obviously there’s warm-up/cool-down riding and easier sections in there. Descending on hill reps for example. Still the work in week two tended to be easier, lower heart rate riding with specific bouts of intensity. I think it also continues to point to the vast range of variables actually influencing this chart. I’m going to consider some of those variables in week three.

Without becoming too negative and completely rejecting what I’ve done so far I am reading this as a return to fitness. Whilst I didn’t have the complete freshness of week one I was able to put in some very solid work and am clearly not wildly far from previous performances. All good stuff. This topic will be revisited when I start looking at week three (probably Monday).

Outside of cycling I have stuck to my daily run and swim schedule and managed two complete weeks running and swimming everyday. In both cases the result has been a drop in perceived effort for my performance. I’m pretty confident I’m back where I was with the running. Swimming I’m less sure of. It’s taken a while, but I’m finally starting to feel a little more normal in the water. How that relates to race performance I’m not sure. My relative training versus racing performance in swimming is probably a topic I should revisit in the future.

The last two days of week two were a little off plan. Breaking down the bike and travelling took more out of the schedule than expected and I simply didn’t have the time, energy and let’s be honest motivation to train more. I sneaked in an extra gym session which to be honest has proved a little unwise prior to a big training camp. DOMS is not fun when you’re riding up a mountain pass! The result was a slightly lower training load than intended, but as a plus a bigger break prior to week three.

A part of me that likes to see big numbers was disappointed. Fortunately 4 days into the next week and I’m seeing far more interesting data and achieving so much more. Definitely a moment of the bigger picture taking priority. It’s all too easy to get hung up on the small details.

I’m waffling now. I promise the next week will be a far more interesting post or posts (I might need two it’s that good!)