☰
Home > Ironman Training > Weeks Three and Four of the Kona Build. Two for One!

Weeks Three and Four of the Kona Build. Two for One!

Whilst I’m offering value here I can’t guarantee quality. We are two days out from the official start of the taper and I’m on some heavy days. I’m sorry to say I need my sleep more than I need to post to this blog. Plus of course I’ve been distracted by some analysis relating to tapers anyway! I shouldn’t promise when I’m going to deliver these things. 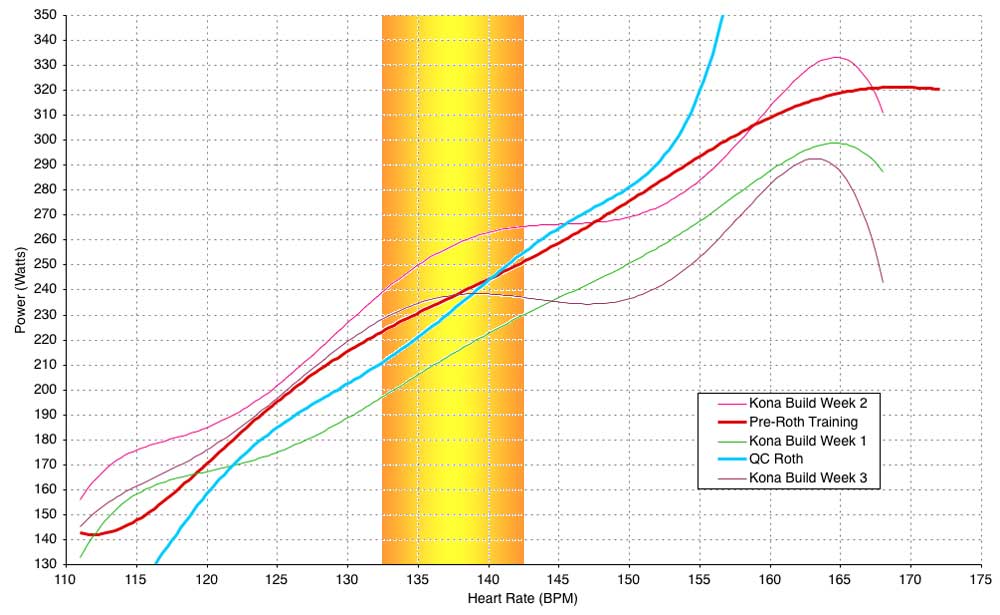 Presented more for completeness than anything else. As mentioned in my week two analysis I’ve come to consider this graph of limited value. There’s a number of reasons for that. In the case of the third week of training the fact my powertap ran out of batteries lost some data. Immediately we’re lacking the complete picture.

I’ll admit though it was the fact that the numbers weren’t higher than week two that first got me thinking. It was an ego thing, the line should be rising as I get fitter! I noticed in my training it was harder to raise the heart rate outside of climbing. Not that I couldn’t, but there’s a bigger mental step involved.

My initial thoughts were along the lines of limitations of the samples and the influence of the environment. For example when climbing in the Pyrenees you can often be on a Col taking an hour to complete. You’re working all that time and so at a higher heart rate and power. Compare with my riding back home where my longest hill is done in twenty minutes and only the last five are really that hard. One thing this means is I have much more data for 130 BPM and above than usual. In a way this data is probably more ‘fair’ as a representation of my riding.

So why the drop? Well it was obvious really and has been pointed out in conversation too. Fatigue! After two very solid weeks coming from being completely fresh I was tired. A couple of light days before I hit the climbs didn’t cut it as a true break. What the chart lacks is a way to factor in fatigue.

Currently I’m contemplating whether the best value for this sort of comparison would come from only using specific, focussed sessions when you know you’re rested. Races for example would be perfect. That Roth line may be the most useful on there. A side effect of all this is I’ve ordered a wheel cover to convert my powertap to a disc wheel for some of my up coming races. You can’t underestimate the value of racing with power and this way I get the benefits of aero too.

Week 4 was very much about recovering and really adds nothing to the chart so I’ve not included it. 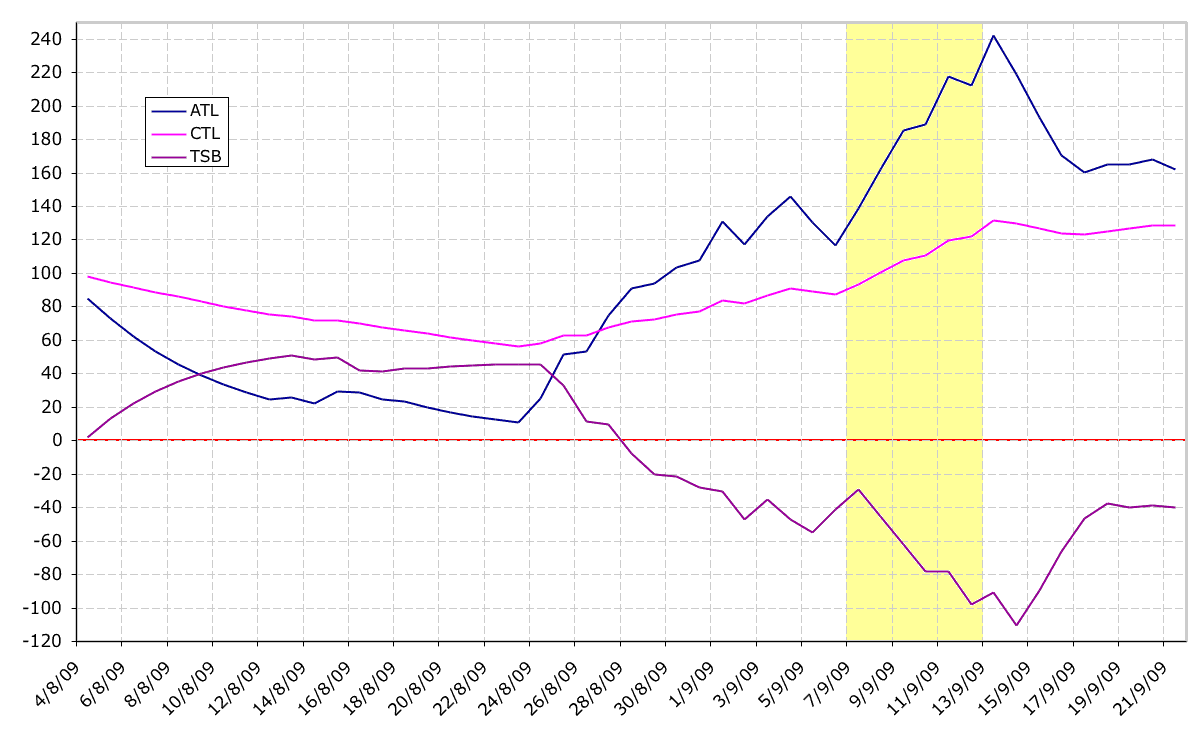 So how about that fatigue then. If I pull up the Performance Management Chart from WKO+ you get to see just what it was like. I’ve had it pointed out that my last post was quite confusing if you’re not familiar with the software. I can only apologise I just didn’t want to explain the terminology again. I suggest reading here to better understand it. I will work on my own page to cover the data as a quick reference in the future.

Back to the chart then. Look at the start of week three highlighted in yellow. The thing to note is that my Training Stress Balance (TSB) is already negative. You can see it had an increase before the week started thanks to those two days off, but I start the week from a point of fatigue and build from there.

Then I really ramp things up. Taking my Acute Training Load (ATL) or fatigue as it can be known up by about 50%. That’s a massive shift again. I was very aware in the week that I was doing this to myself and a little uncertain how it’d go. I was increasingly tired, but found that a good eight to nine hours sleep a night was doing a lot to combat the issues.

When it came to the final day’s big ride and I saw TSB already below -100 I was a little nervous. I’ve never taken it so low. With an extra nap though and a good night’s rest beforehand I got through the final big day relatively unscathed. Had I had power data it would be very interesting to see what the affect was.

If I learnt anything from the week in terms of fatigue it was firstly that I can cope with a lot more than I thought, but it does affect quality. It becomes harder to do the hard work and not to slack off. Having mountains helps as there’s no easy way up them! Secondly the value of a lot of sleep is immense. Get enough and you can deal with very big training days over and over again. Finally a day with a 32km run and 60km bike in is not an easier day in the scheme of things!

Skimming through week four the only thing to note is how much I had to let things drop down to recover and start to get back on track by the end of the week. I couldn’t back up really big weeks like that too often. The numbers for week four are a little low because I don’t assign a Training Stress Score to swimming at the moment.

DOMS! Should I lift?

A very specific piece of fatigue I experience was DOMS! I’ve not really had it before, but made the mistake of doing a big weights session just before I went out to France. I think I ended up pushing bigger weights than usual on the legs because I felt it for the first few days of the trip.

Fortunately it passed and I don’t think the soreness was too much of an issue, but it raised questions about the value of weights in my training. Reading around the topic online it would seem DOMs isn’t uncommon when starting back at weights or doing high loads. On this occasion it was almost certainly the latter.

I’m not going to go into too much detail for now. Weights are a contentious issue in endurance training. My feeling is that they aren’t strictly necessary and if time constrained you shouldn’t worry too much. Core work is more important in the overall scheme of things. I do however think regular weights work is beneficial for my swimming and my running. I’m not convinced it’s done much for my cycling. Also whilst I’ve been losing weight for my race, it helps ensure muscle mass remains.

During week four I experienced a bit more of the DOMS as I got back to the gym, but I’m pleased to say as I come to the end of week five that’s all cleared up. I will continue weights in the program, though will be a little easier in my reintroductions after time off from now on!

I’ve already mentioned the benefits of sleep. This is huge! Once I’m comfortably hitting over eight hours it became much easier to tolerate big day after big day. Despite the building fatigue as the week goes on I was still able to keep going with a slight dip on day five. I’m trying to replicate the sleep pattern more at home. With more distractions it becomes a lot harder though.

Once back home in week four those hours of sleep did suffer, but I cut back the biking and running and focussed on the swimming. Time in the pool was less stressful on the body and it gave me some chance to recover. As you can see in the chart above I’m still in negative TSB though. That was a big training load I put in and it takes time to get clear of it. My Kona taper should deal with the rest of that, but I’m getting ahead of myself.

My original plan for week four had been to get another solid training week in. The reality was that I wasn’t able to do as much as I wanted to. Just too plain tired so I had to stick to keeping things simple and doing what I felt I could manage. Despite this I somehow ended up with another big week by hours, but a little shorter on overall load.

I could be disappointed with how week four went. It wasn’t what I had on paper, but reality doesn’t always live up to the plan. By the end of the fourth week I was starting to feel a bit more like normal. A swim focus had got me past any concerns I might have had that the absence of swim time in France might have set me back. In fact week four was great for getting me back into pool swimming.

My running and biking has picked up and I’m definitely feeling a little stronger for the time in France. Right now I’m feeling pretty strong and positive. The only thing holding me back is the fatigue in the system and that’s what the taper is all about. I’m in good form and excited to see what happens when Kona comes around on the 10th.

Week five is now almost over, but before I analyse how it’s gone I’ll be doing a couple of posts on my taper plans. As my last post covered a bit I’ve some new ideas to work with and will have a much more specific taper period for it. Having discussed it with others you can see some of their thoughts posted already. Maryka has a three parter looking at her taper and Steven has adopted a TSB model into his training analysis.