☰
Home > Back in Busselton

If there’s one thing to say about Busselton the locals know how to make you welcome. From picking me up from the coach stop and having my house all ready for me through to absolutely hammering me on the morning group ride! It’s good to be back. 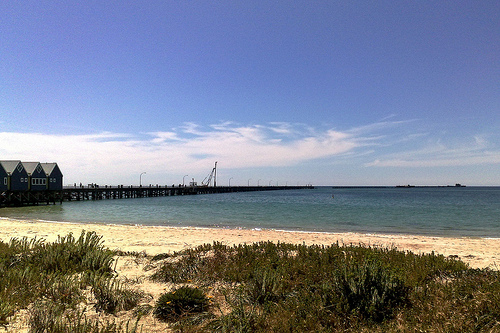 For the most part the place hasn’t changed. Where it has it really stands out though. Most noticeably for any visitor is the current state of the Jetty. It seems the much needed repair work I’ve heard about on previous trips is finally going ahead. There’s not so much jetty to see right now. Most of it is in pieces as they replace it bit by bit. I doubt it’ll be finished in time for the Ironman either. A little disappointing for the visitors to the race.

As a consequence ocean swims have changed. Now swimming parallel to the shore rather than around the jetty. Not quite the same really, perhaps better for those of a nervous disposition when it comes to sharks. Having just come back from a swim myself the water temperature is perfect. Little bit of a current to work against heading west, but five minutes faster on the way back.

I promised once I got here I’d get stuck in to training. Dutifully with only minor protest I headed out for an easy run last night. Nice and relaxed down to the beach front path to take in the views. At least it was supposed to be nice and relaxed, but my left calf had other plans. I’ve not felt it tighten up like that in a long time. Not good at all. I got myself home and decided a massage was a priority.

The ensuing half hour of pain should make me question my luck! Then there’s learning my left leg is in a worse state than I hoped. Nothing serious, but it seems I’ve got to hold back on running. An exceptional tight ITB and knots in the calf to clear. I’ve booked a repeat appointment for more pain later this week. I want to get on top of this quickly.

Jumping back to the start of today. I mean properly the start. I was up before 5! Squad rides start at 5:30 from the Goose Cafe Car Park. I wanted to be on time for my first one. It was a shock to the system despite a reasonably early night. It was also surprisingly chilly first thing and going outside didn’t seem that appealing. A reminder that the climate here isn’t that full on consistant warmth like the Gold Coast.

So with toe warmers, arm warmers and a gilet on I headed out for the ride. I was warned it would only be an easy ride though a few of the guys would be tacking on a little extra to the easy loop. After three weeks essentially off training (near enough!) easy sounded good. There’s something about group rides though…

I kept myself near the front and went for that little tack on. At least weeks off left me fresh, I needed it. The ride was one of the harder efforts I’ve done in a while, including the race in Perth. Real solid power output, lots of surging in with it and no real let up. I questioned whether I should be holding myself back more. It was irresistible though!

Besides it all finishes with a coffee at the Samovar in town. A chance to catch up with people after a year and see what’s going on. Already it looks like I may have got myself into a team for the Geo Bay Swim. I’d heard about it and it looked fun if you’re in a team, solo would be madness. As usual it doesn’t take much to persuade me!

So I’m settled in. I’ve got my bearings and have my (adjusted) training plans for the coming weeks. The group sessions should help work me hard if today is anything to go by. Perfect as it’s wat I feel I need right now. Perhaps a little less concern on volume and a bit more on intensity. Hopefully I can get myself running well shortly too.