☰
Home > Racing > Back in Busselton

The 2 month review will come later next week, sure that’s over 2 months, but let’s not be picky now. I’m back in Busselton tapering down for the big race and I have to say I’m really glad to be back here. I had forgotten just how beautiful the region is. As a destination race I really recommend it. As a race I really recommend it too, the community gets behind it 100% they’re already building up for it.

Before I get to the past day or two over here I have to say I had one of the worst journeys of my travels to get here. The night before I left more storms hit SE Queensland, the thunder sounded like explosions at times and went on throughout the night. I got up early, not very well rested, but hoping for a relatively straight-forward day. My taxi driver had little concept of being quiet when he picked me up, talking loudly even when I told him people were sleeping! I was already irritated and I’d barely left the house.

I got to Robina station with plenty of time for the first train, caught it without a single problem. After a slow start the driver announces that due to the storms we will be restricted to 40kph for the first half of the journey. So I spend the train journey trying not to check my watch too much because there’s not much I can do about it anyway. Then 1 station before the airport they terminate the train! Everybody off and wait a few minutes for the next one. I got to the airport 35 minutes before my flight, 5 minutes before cut off for boarding.

Turns out I’ve packed everything, but the kitchen sink as my bike bag weighs in at 33kg! So I pay up for the weight and wait whilst they phone to check if the baggage handlers will accept it (they can refuse over 32kg). Fortunately there’s no problem and I’m straight off to board the plane. Our flight is late to take off and then we have a headwind the entire journey which adds an hour to the trip! Once I’m in Perth I catch a small shuttle bus to the city busport and learn they’re as scary to ride as they are when you’re a cyclists near them. At the busport the lift and escalator is out of order so I have to lug my bag upstairs to the coach office. Fortunately I can leave it there and go an find food in the city. From then on till I arrived in Busso at 9pm it all went relatively smoothly!

My terrible journey aside I’m loving being back here. I have excellent homestay, they’ve been really good to me and the location is perfect. The weather has been good so far, though a little cold now I’ve acclimatised to the Gold Coast! The views are spectacular and the people friendly as. I built my bike up on Friday morning and popped over to the bike store that’s 3 minutes away. They discounted every single item I bought for me! Maybe everything is just priced up, but it seemed I was getting some bargains.

A moment to mention some training details I’m afraid. I decided to ride for a couple of hours and head west to the next town in Dunsborough. It was a pleasant ride, though the road is pretty busy at times. The winds weren’t too strong and though I don’t have the powermeter with me to gauge it I felt I was going well. Based on heart rate and speed a nice and easy 120bpm was comfortably getting me 35kph! It was a little bit of a confidence boost for sure. The ride today was a bit different, but I’ll come to that shortly. 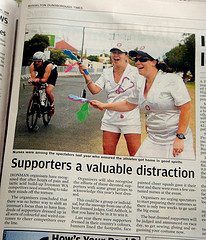 I had my lunch at a local sandwich shop and whilst I waited thought I’d look at the local paper. The headlines included a ‘2 Weeks to the Ironman’ banner and some more details inside. So I went to look at that, impressed that it was already getting featured. To my surprise the photo used in the article had me in the background from last year! I decided that had to be a good omen! Another article talked about how in the first year one local entered the race and now 84 have. Later that day I’d be chatting with that local over coffee after a swim along the pier.

One of the great things about the community involvement is they love having people from all round the world visiting and encourage they get involved with the local community. It’s through this scheme I’d sorted my homestay and also had been given all the information I might need to train with the local athletes. So Friday evening was a 2km swim out into a choppy sea and back. It was hard work, a real slog and certainly nothing like my memories of last year’s swim! I’m not very experienced at sea swimming, but hopefully I’ll get some good practice the next couple of weeks. After the swim the group had coffee and I spent a lot of time chatting with Max the veteran triathlete of the area. He’s raced all 5 Ironmans there and this year is really taking it seriously.

Today I met up on a chilly (18C for those in the UK!) morning. I joined the fast group which proved to be good fun. We went out at about 32kph and we came home a lot faster. Strictly speaking I should have been doing a long steady ride, instead it was a shorter hard effort! I haven’t hammered myself that hard in a while. We rode fast to the base of the local ‘climb’ and I jumped off the front, I was reeled back in, but it was worth a shot. After the climb the pace picked up a little until the turn-around at which point people go for it. I did some far too long pulls on the front at over 40kph until I’d really got the lactic acid flowing. Ultimately I blew up about 15k from home, missed the tail of the lead group and tried to work with a smaller group to catch them, but it wasn’t happening.

My plan to ride another hour was aborted for coffee and a chat with the group. My plan to head off shortly after a coffee and get the rest of my ride in kept getting postponed. The group here is really friendly and I kept putting off leaving till I was one of the last there. I left with a local Mick and a Scotsman Alex, we popped in on Max and had a chat there and then I rode over to the place Alex was renting for more coffee and conversation. Ultimately I did ride that extra hour or so I wanted, though it’s value is questionable given it was interrupted every 15 minutes! Still I more than made up for duration with intensity and just hope I didn’t over do it. I’ll be riding with the group for the next couple of weeks, but taking things a lot easier.

I’ve wandered the town since then, on tired legs it had to be said. Had lunch and coffee and started planning my next block of training in a little notebook. I think of it in terms of how I need to put aside some issues from the past month, step up to the task at hand and start truly living the pro-athlete life. You have to live the way you want to be, not just think about it. I’m also trying the same in my taper, though what with meeting friends I’ve not seen in a year tonight I may have to excuse myself a little! 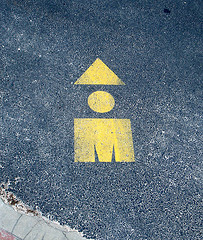 OK, 2 month review to come next time, and then hopefully some good posts about life over here in the West. Feeling pretty positive about things. My legs are sore and stiff, but I’ve got some massage lined up and have been recommended someone by the group here. I’ve been told it’s the House of Pain and very effective. Hopefully I’ll be getting a work over sometime later next week. The training I’ve done this week has been less than intended, but the last 2 days I also think there’s signs fatigue is shifting and I’m getting stronger. And finally the friendliness of the group here just encourages me more. I openly admit my race goals and hope I can live up to them.