Rest Day! All points were neutralised today, there’s nothing for running or swimming. All we had to do was get up, get ourselves on the Interislander ferry and ride 28km from Picton to our motel in Blenheim. After eight days of near enough eight hours training a day it was just an hours spinning.

I thought I might fit a short run or swim in to keep the body moving, but I can’t build up the enthusiasm for it. I’m enjoying having so little to do for a day and trying to recharge myself for the final six days.

It’s been a big trip so far. Eight days of solid Epic Camp training puts me at a point I’ve only been a couple of times before. Normally I’d be about to take an easy week to recover from it too. This time I’m going to be pushing on for another six days of hard work. I’m digging a deeper hole than I’ve ever dug before.

One week in and the Performance Management Chart is looking like this (Epic Camp fortnight highlighted with cyan). 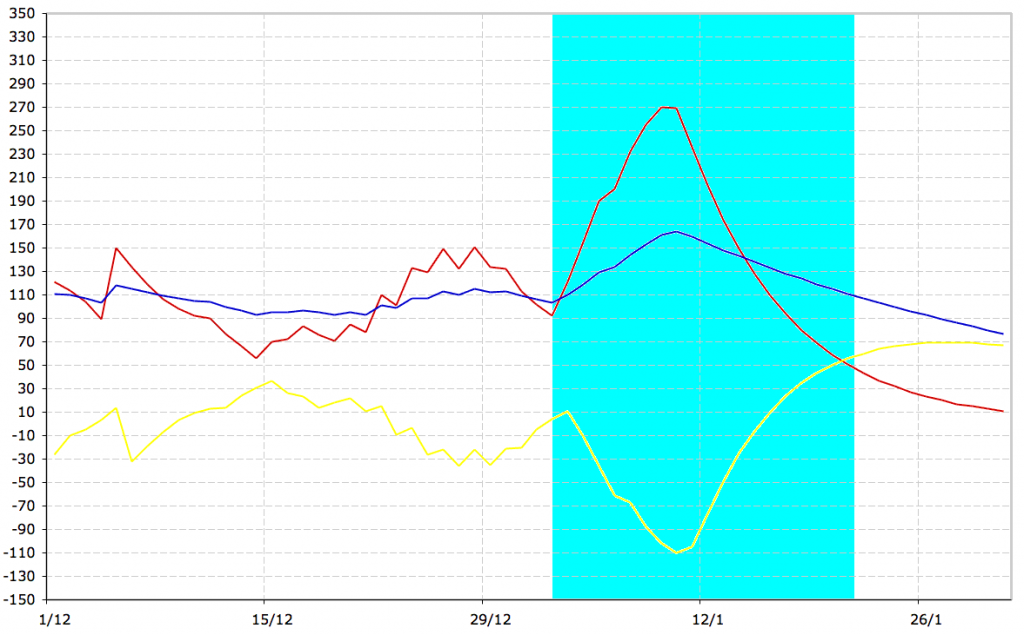 CTL around 165 and TSB around -110! Like I say, I’ve been that low two or three times, always at the end of Epic Camps and always followed with an easy week. How I’m going to hold up to six more days of similar intensity to the week that’s gone when I’m already that far gone is going to be interesting.

The short ride today felt okay, though the legs had stiffened up a little from sitting around on the ferry. a massage in a little while will hopefully help loosen things up and tomorrow I’ll get back into things.

I’m finding that my power is largely capped now. I’m able to ride a lot around the 70-75% intensity level, but going higher takes more effort both physically and mentally. I saw it on the climb in the Rimutakas yesterday, the body wasn’t willing to give that little bit more up the hill.

Given that I’m feeling surprisingly good really and still feel able to take on the challenge. I’m still making plans for getting in swim, bike and run every day. Hopefully getting a few more of the bonuses open to me. There’s one more 6K swim and one more 25K run bonus open to me. I’m almost there on camp minimums for swim and run, it’s all about those few extra points. I want back into the top 5!

Tomorrow’s ride is a comparatively short 125km. There should be a swim and a run of some sort. I may look into the longer run then if I feel up to it.