I’m back in Wellington which after a weekend of foul weather has turned on the sunshine for me. I felt a slight inkling to go out on the bike on such a lovely day. After 15 days of riding it felt wrong not to be sitting on a saddle. Fortunately it’s still in the bag so there wasn’t really an option. Tomorrow maybe, but for now I went for a nice, easy swim.

My third time at Epic Camp is over. Once again I managed to complete the camp minimums and throw in a little bit extra for a few more points. I’m waiting to see if I did enough to retain sixth place once the KOM points are factored in. Whilst I enjoy getting a little involved in the points game the main point of camp is the training.

Before I left for Auckland I set myself some goals for the camp. I have to admit to mixed success with these. If I’m disappointed with any of them it’s how quickly I cracked on the nutrition side. I turned to sugars early in the camp and didn’t turn back! I think in the second week my eating habits were a little more controlled and structured, but still nothing like the paleo for athletes plan.

I can check off camp completion from the list without problem. I didn’t run every day though. I didn’t run on the easy day, nor on one other day when I might have. I did run a lot mind you, not to the level of some on the camp, but a reasonable amount considering everything else going on. I’ve handled much bigger running loads in the past, but considering how much running I’d done in the couple of weeks before the camp and all the other training I’m not too disappointed. It does mean I won’t be scoring highly in Gordo’s run game of course!

I swam a lot, missing one or two optional swims in the second week of camp. I was particularly pleased to actually get a 6K swim in and do a reasonable number of the swim sets this time. I finished with a good 7 or 8km more swimming than camp minimums at least. I also picked up run bonuses from doing one 25km run (on day one too) and a day with a couple of 10K runs in.

Did I test my limits though? The straight up answer is yes. I’ve never done training like that. I’ll admit I’m suffering a little from that feeling that perhaps I could have done more. Just like finishing a race and thinking how you could have gone faster. Perhaps I could, but what I did pushed me. I think if I take anything away it’s that I worked myself too hard on the North island and struggled more on the South.

The first eight days were comparable with previous eight day camps for me. I finished feeling a lot less fatigued or worn down. From then on though it became an increasing struggle to maintain the level of performance. It’s not to say I didn’t have some good riding on the South island I just had better riding on the North. In fact much of my South island riding would have made perfectly acceptable long training rides outside of camp.

It’s amazing to see how some people coped with the long camp. Particularly impressive were those who got stronger as the camp went on or who maintained their level of performance. In some cases this may have been down to more sensible pacing over the camp. In others it speaks of superb recovery. Something to work towards.

For those interested in the hours and kilometres my logs say I did this:

Slightly less hours than I anticipated for the distances involved. Still far more than I’ve ever done in a two week period. There was a lot of steady riding, but very little really easy riding. Similarly there were only a couple of days I’d say my run pace really suffered. Swimming didn’t vary that much over camp which is to say I was about as slow as normal! 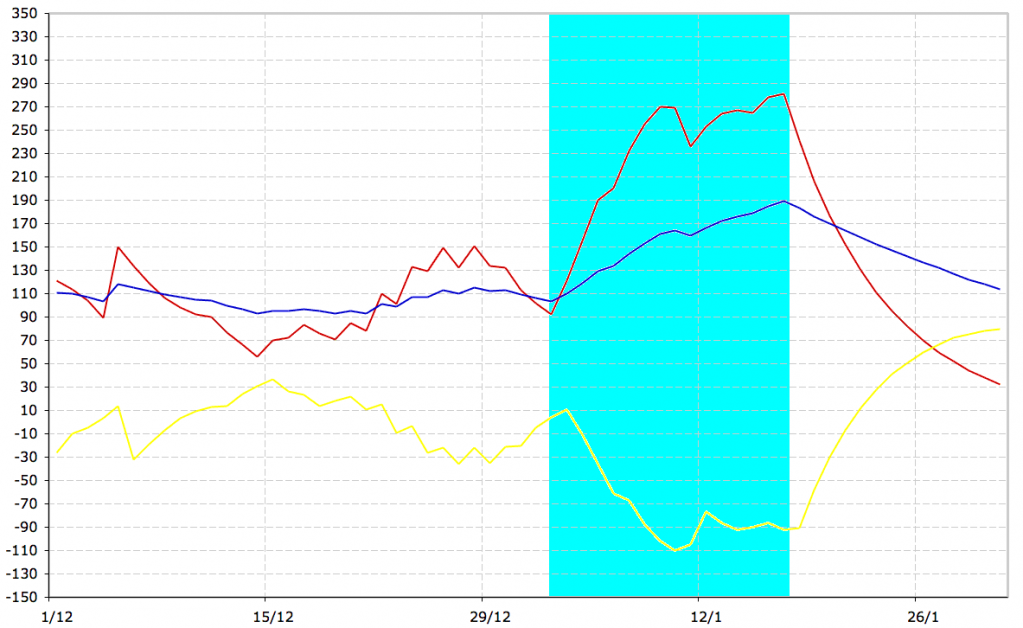 If I look at my performance management chart a couple of points stick out. Firstly the overall affect of camp is an all new high for my CTL. Not really surprising the aim now is to recover without too much loss in that fitness. Secondly the rest day gave a nice break and recovery to my TSB. From that point on I didn’t sink too much lower. This also relates to the ‘easier’ nature of the South island. I said I didn’t ride as well and overall stress was lower. I spent a lot more time hiding myself in the packs.

It’s a big start to the year ahead. I’ve pushed up my swim, bike and run beyond last year’s figures already. My aim now is to build on this and work towards bettering on my 2009 performances. It’s going to take some focus and careful work from here on. Recover from camp above anything else.

I’ve some minor goals in the process. I aim to ride over 3,000km in January. I’m well on my way there and good active recovery will help for the next week. It’ll set me up to log more distance on the bike than last year. I’d like to hit 25,000km for a year. Similarly I’ll aim for higher figures for both swim and run. I just haven’t come up with targets for those yet! Maybe 800km swimming and 3000km of running. Don’t hold me to those yet.

Each time I’ve done Epic Camp I’ve gone in a little nervous as to how I’ll cope. My fitness has proved to be up to the test and I’ve managed to push a little and test myself. I come into camp a better athlete than before and I leave seeing how much more there is to do. Lee commented me over the final dinner how he could see the camps being addictive. They really are. I know I’ll be back in the future to test those limits again.