I was expecting to be writing from Lanzarote but for now Reading will be a substitute for Puerto del Carmen. If there’s a silver lining to the volcanic ash cloud it’s that I don’t have to pack my bike for a few more days. It’d be easier to get good training done with a little bit more sun and a few less distractions.

Last week my objective was to go from a lazy, detrained state to someone ready to train hard. Mixed success on that one. Some solid biking and a good swim session have been done whilst running leaves something to be desired. The next few days will be very telling hopefully I can hold it all together.

There’ll be some work involved restoring the massive drop off in fitness I charted last week. I’ve an ambitious goal to achieve it over the next month, but whilst I’m here at low CTL and high TSB my experiences have been interesting. The results a few hard rides all performed in a well rested state have me thinking. 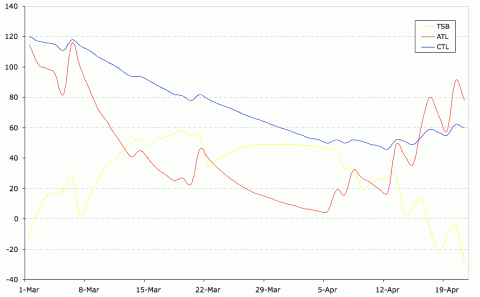 Every reader knows I track and analyse my training through WKO+ and it’s round those lighter training periods that I start to dig into things more. Normally I’ve looked at the Performance Management Chart from the perspective of being well trained. What happens at high CTL and low or negative TSB and especially the process of tapering with them. When it comes to building fitness I’ve taken the simple approach of raising CTL as quickly as I can tolerate. Just check out the massive rises on some past training ventures (along with massive dives in TSB).

The simplistic viewpoint is that the higher the CTL the better. I’m not going to refute this I think its true to a large extent however I’d warn against holding CTL in too high an esteem. Given the large decline in my own CTL I’ve been surprised by recent performances on the bike. It made me wonder if I put too much emphasis on achieving a high CTL by any means.

Whilst CTL is considered analogous to fitness its specifically a measure of the training stress you’ve been applying over a period of weeks. Its a great indicator of how training is going. To keep raising CTL you need to be consistently applying a training stress higher than it’s current value. As CTL rises so does the minimal amount of training stress to keep it growing – progressive overload! CTL indicates fitness because a higher value should indicate a longer or more intense period of high training stress. A high CTL shows you’ve been training hard for a period of time and so should be making adaptations.

As CTL gets higher it also becomes harder to maintain. Sharp peaks from concentrated training blocks rapidly decline during easier periods. There’s enough work in maintaining new higher levels of CTL, let alone building them. My experiences after Epic Camp this year were an example of that. Consistent bike training throughout February never raised my CTL any further. Unable to put in the repeated high training stress days of camp CTL fluctuated at a high level.

If CTL has stabilised that doesn’t mean you can’t progress fitness though it’s easy to fall into that line of thinking (I’m certainly guilty of this). It’s important to remember that the training stress that CTL is calculated from is relative to a threshold pace or power you can hold for a fixed period (an hour in the case of FTP for example). Whilst training is increasing CTL it should also be raising threshold.

A month of solid training gives me a notably higher CTL, but I’m also hoping that I’ll have a higher FTP. The other side to that coin is a month off will give a lower CTL and I’d anticipate my FTP will have dropped. It follows that an hour at 80% effort performed on day one of my training block should be at a lower power than an 80% effort performed on day twenty-eight.

These performances metrics are more important than the exact value of CTL. If training isn’t changing your thresholds month on month then whatever your CTL little is happening to change performance. A high or rising CTL isn’t the goal, but it is a good indicator that your training should be working towards performance improvements. The important thing is to monitor actual performance to ensure what you’re doing is getting the results you want.

Back to my own training and my recent experiences on the bike. Having had a long period of relatively little riding, seeing my CTL drop by two thirds and my TSB rise to very positive levels my expectation was that my FTP would have dropped. Ideally I should go and test this to get precise feedback I’m currently going by number two of the seven deadly sins.

What number two is suggesting to me is that my FTP is comfortably where it was for Ironman New Zealand. With the freshness associated with rest and positive TSB I’m able to go out and ride at higher power than I’d expect. This past week I’ve managed to set new PBs for one minute and five minute power. I’ll admit both were soft before my new one minute PB finally is classified as untrained according to WKO+!

Once I’m warmed up and settled in for the ride my average power for the central hours of a long ride is up close to my previous Ironman averages. Effectively it seems I’m going out and riding at close to what I’ve consider race pace for most of my rides. It’s a very satisfying situation to be in and gives me a lot of optimism that with the right approach I can build on this for Kona.

It suggests to me that whilst CTL declines rapidly other fitness metrics change more slowly. To reasonably maintain my old FTP figure hasn’t taken the large levels of training I was doing to build it up. A few workouts spread over the month and with a mix of intensity in them seems to have slowed decline there. The result is I come out of a real recovery period without losing a lot of what I’d gained.

One caution comes from comparing my heart rate in recent sessions to my major training blocks. After any period of rest I find on return to regular training my heart rate is much higher for the initial week. I put this down to a combination of loss in fitness and freshness. Without my usual fatigue it’s much easier to raise my heart rate to peak levels (setting the one minute power PB on Streatley Hill saw heart rates in rarely reached 180s). If I can continue this bike performance as fatigue builds it’s a good sign.

Increasingly I’m also considering the mental contribution to my current performance. My Ironman New Zealand bike and performance leading into that gave me some confidence. I have to admit I’m coming into rides believing I can ride harder. How much difference does that make? I suspect I’m willing to keep pushing that little bit more and just see what happens.

I can think of a similar situation at the end of last year. I like to use hills to help me work harder on the bike a bit of gradient does a lot to motivate you to push more. When I headed to Busselton for Ironman Western Australia there weren’t any hills and I’d be racing on the flat. It took a couple of sessions to get comfortable with really pushing in those conditions. Once I was used to it I rapidly started riding harder and harder.

This mental aspect, the confidence to train and race hard is another side to training. Whilst I’ve emphasised the importance in raising your threshold through the sessions you’re doing I think developing the ability to consistently work at appropriate percentages of threshold is too. Looking at data from recent races the average and normalised powers I ride at has increased and there’s also been a slight increase in the average heart rate. Recent training has enabled me to work at a higher effort level during races and a lot of that is the mental approach.

This is a long, rambling way to say that I’m returning to normal activity and pleasantly surprised by how little performance has declined. Leading me to conclude I can put too much emphasis on the exact value of metrics like CTL and not enough on the performance I’m getting. Aspects of fitness change at different rates so after a period of rest performance may be better than you expect. Whilst threshold is an important measure of fitness and a guide to performance there’s also developing the mental ability to work at your race pace. Particularly important for longer distances I feel.

Also I should go out and run, because there’s definitely room for work there right now!