I began the season with a simple goal: raise my performance to the next level. But following a winter break I was also at a fitness low. We all start somewhere and consistent work has restored my cycling back to previous season bests. With two-thirds of the year remaining cycling at least has a sound platform from which to build. I haven’t been the best triathlete – running and swimming have a way to go.

Every workout on the road to peak performance has been logged in WKO; each session assigned a Training Stress Score (TSS). The result is a clean four month Performance Management Chart (PMC) showing my progression from minimal fitness through to current form. It’s a contrast to the roller coaster PMCs of previous seasons where frequent racing interrupted smooth progression. It’s a good example of how we go about building fitness and how we can use the PMC to monitor and guide this. 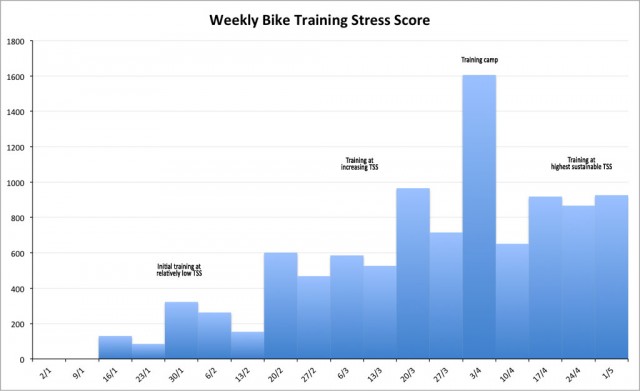 Training stress builds fitness and fatigue; the fitter I am the greater the training stress I can handle. At the start of the year with low fitness my weekly TSS is limited, the load I currently handle would lead to exhaustion or injury. When you’re used to training hard being unable to do more is frustrating, but you can only train as much as your body can tolerate.

In preparation a five week block of low weekly TSS built the fitness to handle more. After this I could train harder, but my performance was not yet near previous levels. Training was consistent and at the highest volume I could sustain; I controlled intensity finding it hard to achieve whilst still at relatively unfit.

A second block of more moderate training led into my training camp, a week of high volume riding. The camp motivated me to train hard and raised my fitness over the course of the week. Such a high TSS would be unsustainable in normal circumstances. From past experience I expected to see a notable rise in performance and after an easier week I felt stronger and better able to train.

The most recent block has been at my highest sustainable weekly TSS. I outlined my guidelines for training in January and as mentioned above 1000 TSS per week is hard to sustain. Once you include swimming and running the commitment of time and recovery doesn’t fit with a working lifestyle. As the season progresses weekly bike TSS will drop to allow more time for the other disciplines. The balance of intensity and focus of rides wil shift in line with this change. 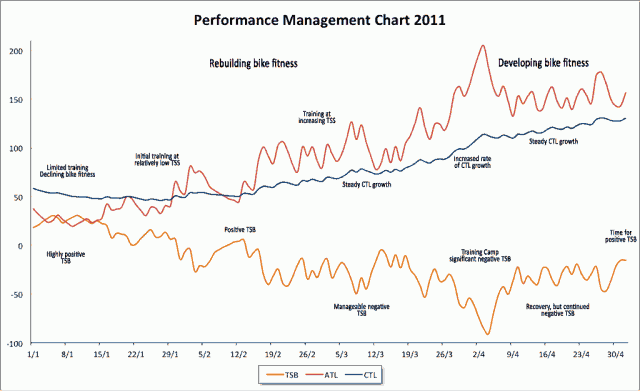 The PMC clearly shows the fitness growth delivered by the weekly TSS. The year began with low CTL (fitness), low ATL (fatigue) and high TSB (form). I was well rested, but at that level of fitness performance was low. My initial low TSS training block stopped the decline in CTL and started to build fatigue. It prepared me for what was to come, reacquainting my body with training. Attempting more would have severely crashed TSB, leading to protracted recovery and fitness loss.

The growth in CTL began with increased training in the second block. TSB soon dropped to a manageable -30 to -50, a region I know I can handle for an extended period. Weekly fluctuation in training allowed amounts of recovery and stable growth without excessive fatigue. The ramp rate for CTL is entirely sustainable, week on week fitness builds. At this point I was able to work harder, but still found intensity demanding.

My training camp and its high TSS created a large spike in fatigue and raised fitness at a higher rate; TSB dived to -100, likely to need solid recovery. I followed the camp with an easier week, though actually managed a reasonably high TSS. The result was a minimal drop in fitness and TSB raised to around -40. My guidelines advise me to allow TSB to become positive, but I trained on.

For the final block, fitness has been comparable with previous builds and I’ve started to see improved performance in training sessions. I’ve been sufficiently fit to handle a consistent high weekly TSS and incorporate a mixture of hard, focussed sessions into each week. However, there has definitely been a notable accumulation of fatigue and I’m relieved to be taking this week easier in preparation for my next training camp.

The current level of negative TSB with steady CTL growth seems sustainable, but I feel I’m becoming stale and training seems harder. I’m consciously taking a break to shed fatigue and allow fitness to drop a touch. The next block commences with two hard weeks in Lanzarote, a focussed period of high TSS likely to significantly raise CTL and fatigue. I need to be well prepared to make the most of the time and be able to push performance forward.

Comparing the year with my guidelines it’s clear my views on sustainable TSS were sound. I have pushed and held TSB lower than expected, though I suspect I would have benefited from a period of recovery and positive TSB before the training camp. Clearly I can handle longer periods in negative TSB better than I thought. Whether this is a result of the minimal run volume and associated fatigue will be something to examine in future months.

Tracking fitness is one part of the picture and whilst it’s satisfying to see this steady growth and relate it to my training, performance is what counts. I’ll revisiting this topic later in the week to focus on the recent training block and look at how performance has change.