Race day is almost here and finally pre-race nerves are making a show. I’ve spent the week feeling relaxed, telling people how relaxed I am and even being told I look relaxed. Truth is I’m anxious enough to be up early the day before the race. 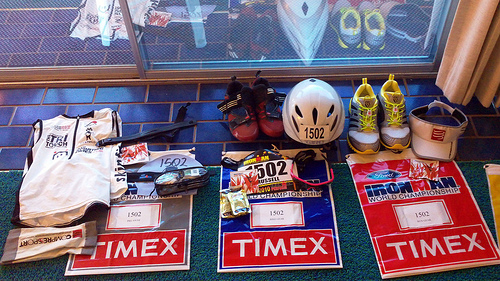 Every race has unknowns, but my run fitness leaves big questions that I can’t answer until Saturday. It’s never a matter of can I finish? I’ve confirmed that enough before. Nor is it whether it’ll hurt on the day because I know at times it will. The question is how will I perform?

Last year my long campaign to reach Hawaii finished perfectly. Not only did I qualify I came to the island and went sub-10 hours first time. Returning for a second attempt I’ve already set the bar high! When I consider performance I wonder if I can improve on that result.

It could well be tight, but a good plan will help me get there.

As I learnt to my disadvantage last year swim placement in Hawaii is critical. It’s the roughest mass start I’ve been involved in. So many athletes of similar swim ability ensures large bunches. Place yourself incorrectly, end up in the wrong bunch and there’s a long swim ahead.

There’s no fear of missing a draft, it’s all down to getting the right draft. Based on how I’ve felt over the past two weeks I’m going to place myself further forward. Somewhere central or to the left and four or five rows back should see me amongst my swim peers. I’ll definitely avoid the far right after last year!

It’s going to be a rough start where ever I place myself I have to accept that and be mentally prepared for what’s to come. I’ve handled it before and it’s never as bad as I remember. After a few hundred metres things will ease off, they’ll be room.

Once I’m settled it’s about enjoying the well chosen draft and focussing on good stroke technique. Keeping mentally and physically relaxed and swimming exactly as I do in training. Regular, even breathing and build into the swim I suffer when I go too hard too soon.

My goal is to beat last year’s 1:09 swim. Of all last year’s times that’s the easiest to improve on. Plenty of mistakes were made at the start and I under performed. Second time means no excuses. I want to be close to the hour mark, definitely under 1:05.

There’s been a lot of focus on cycling recently and I’m riding harder than I have in the past. This year has seen very different bike training to past seasons. Huge mileage for the first few months of the year through a break and into a tough period in Lanzarote. Then easing back to focus on running and once again taking the forefront with lots of intensity in the final build.

I’ve established new PBs for some of my peak powers as much an indicator in the difference in training as my performance. Every ride has practiced pushing with time spent at or above race pace. It’s been challenging, but the result is I’m changing as a rider.

In 2009 I found it hard to get going. Until the turn at Hawi I felt terrible, but it all came together there and I returned strongly. Since arriving this year I’ve practiced pushing home going a little harder than I will on race day. I know how it can feel and I can deal with it.

The big difference I want to make is minimising that warm-up period. I don’t want to have aching legs and a slow build into the ride I want to get to race pace fast. There’s a balancing act too much too soon will leave me tired later and I suffering on the return leg. I take confidence from recent training and testing that with the right fuelling I can maintain a harder effort than I think.

It’s hard to target a bike time as the winds are a huge factor. Last year’s 5:15 was a great performance and I’d be happy to match it, but I didn’t come here to do that. If I can shave some minutes off through more consistent effort I’ll be very happy. Ultimately the aim is to be more efficient early on and still move through the field in the second half.

Then the unknown. What really happens to run fitness when you barely run for two months? When fitness is there, but time on feet isn’t what are the issues you can expect over a marathon?

I wish I had certain answers to these questions, but until Saturday I won’t know. Aerobically I can handle the run, but I suspect they’ll be some smaller muscles grumbling under the work load. I’m going to go in Kinesio taped after the success on the training run and hope to minimise calf problems.

I’ve two goals in mind. The more realistic goal is to get round in 3:30. The dream goal is to run as well as I did last year. It’s a stretch and I’d be delighted to achieve it, but I’ve no evidence that I can from the last ten weeks.

A 3:30 marathon may sound fast, but I know it’s an easy and natural training pace. By default I’ll fall into that rhythm and it’s only going to be if the body is less tolerant of running impact that I’ll hit problems! It’s hard to say and with Saturday looking like being a scorcher conditions won’t help.

I’m not taking risks and will be packing a special needs bag for the first time. If I’m 18 miles in at the Natural Energy Lab and suffering I’m not taking any chances. I want some kind of chocolate pick-me-up to help with the long trip home!

As I said to some of the guys at the Biestmilch party on Monday. Given the injury and build to this race I’ll be happy to enjoy the day and have a fun race. Getting to Hawaii is the big achievement in most people’s eyes what you do here is just a bonus.

I then added that I would like to beat my time from last year! 9:47 makes it a tall order, but perhaps I’ve got the extra fitness in the swim and bike to carry me through to a better run.