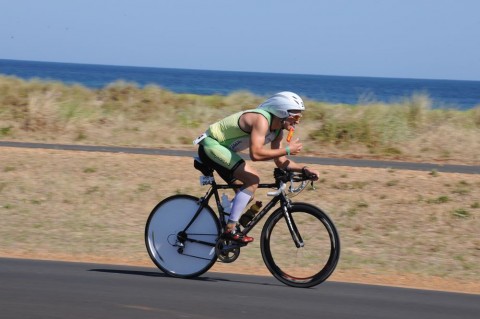 That lump sticking out in the wind is me on my race bike taken at Ironman Western Australia. Sure I’m about to have a snack (race photographers always seem to catch me eating or sticking my tongue out), but I’m not going to win prizes for aerodynamics. I’ve not let this bother me over the past couple of years the practicalities of moving around meant only one bike could accompany me and a road bike seemed the smarter option.

Earlier this week I went out and did my first threshold session of my Kona preparations. Me and another rider using a section of the A4 for a couple of 20 minute out and backs with a 10 minute steady ride in between. Two of us meant we could do it time trial style and act as each others minute man. A little added performance incentive for the session.

With races a way off I’ve removed the clip-on aerobars from my bike. It’s more comfortable without them as I can hold the top of the bars if I want. Taking them off makes the bike more pleasurable to ride and they go back on easily enough once I’m near to racing again. So in effect I’m riding a plain old road bike and enjoying it.

There I am on a road bike and planning to ride the session on the drops. My companion however is on a Cervelo P3C along with tri bars. We’re both equipped with powermeters a powertap in my case and a Quarq in his. So as well as knowing the time it took we’ll know the power for each interval. Things are lining up for a good session as my friend goes off and I time a minute before I start.

What follows is 21 minutes of pain! Working hard to keep my power up over the course. Into a head wind on the way out and then pushing to go faster with the tailwind. It doesn’t matter how tired I am when I’m in that mode I’ll push as hard as I can. As I cruise along on a side road for the steady section and regroup with my friend I discover he did it in 20 minutes.

Round two and I’m keen to make some inroads into my time. This time I go off first and within 5 minutes my friend comes flying past. Actually having him in sight makes a big difference to motivation as I manage to keep him there for the rest of the ride. The result is another 21 minute lap and my friend done in 20.

So unsurprisingly being on the drops on a road bike is slower than on a time trial bike and aerobars. Hardly revolutionary and not something I’ve worried too much about over the course of my Ironman career. When we download our respective data what shocks me is the difference in average power. On both laps I average 15-20 watts more than my friend to go a minute slower!

Again drops versus aerobars it’s not so surprising, but seeing this in raw numbers is enough to make me think. Clearly the next time we do this session I need to have the clip-ons back on the bike. I want to see what difference that makes to our respective power and time. Assuming a similar difference in average power how much closer will being a bit more aero make me?

Whilst this started me pondering the issue of aerodynamics a couple of friends sent me power files from a recent race they’d done. Both very good athletes and had great races. What was most interesting though was looking at the power data. Rider A has a powertap whilst rider B has an SRM both were riding similar wheel setups (disc and aero front) and time trial bikes.

Rider A averaged 245 watts whilst rider B averaged 242. Despite such similar efforts and being on the course at roughly the same time Rider A went 10 minutes faster than B. Allowing for the powertap power figures to be a little lower than the SRM due to being later in the drive chain that’s perhaps a 5-10 watt difference between the two of them. That difference was seemingly enough to give rider A 10 minutes on B over 120km.

Rider B has a new coach who has suggested his time trial postion needs looking at. He also admits that it is quite up right and ‘similar to mine’. Seeing the data from this race brought home to him the difference it is potentially making. If he could ride the same effort, but in a more aerodynamic position then rider A shouldn’t be able to get 10 minutes on him.

Obviously this also makes me thing. I love my road bike it’s a pleasure to ride and I have had great results on it (that picture from IM Western Australia is taken during a 4:55 bike). It’s not stopped me getting the odd top thirty Ironman finish.

The question is if I averaged the same power in those races, but was on a time trial bike and in a more aerodynamic position how much faster would I go? Or another way to think of it how much harder am I working on the bike compared to the other guys finishing the bike around me?

I haven’t worried about this in a long time, but now I wonder if I need to dig out and clean up the old, old Cervelo P2SL frame I have. Or perhaps start looking for cheap time trial frames out there. Of course if any bike manufacturers, retailers or others feel like providing me a frame that I can use to beat my 5:15 in Kona this year don’t hesitate to get in touch!!

Kona is a tough race and I’m getting fitter than ever, but I want to make sure I’m not giving a single minute or ounce of energy away to my competitors.