Falling across two weeks of my Kona build I think it’s worth giving my time in Lanzarote its own analysis. Hopefully my last post showed what a big week I’ve had, but what does that mean in numbers and more importantly impact on fitness? We’ll start with some top level numbers, but dig a little further.

Bear in mind that this covers an eight day period of training in Club La Santa due to flight timings. Even so it averages out at over five hours training a day and on arrival I only trained for an hour and a half.

It’s hard to meaningfully analyse the swim, but I felt it needed mentioning at the least. I am working to improve my swimming so the trip was good in terms of providing facilities and time to train well. That said I never felt at my best and would say if anything I felt slower than the last time I was in that pool! Not really what you want to be thinking.

I didn’t do enough hard swimming to really judge if my pace was actually lower. To an extent swimming was something I slogged through with fatigue. Running always was the priority and I am better at pushing myself on the bike when I need to. I was pleased to do at least one 6km set, something of a staple of my New Zealand build. I need to get back into that habit as part of my general Kona build.

Lanzarote is great for cycling so I was always in the position that I wanted to emphasise my running, but doing some good biking was so appealing. As it was the general intensity of any ride was higher than it had been at home and this was whilst running more. Roger provided a couple of good sessions with real quality work in towards the end which helped as well. 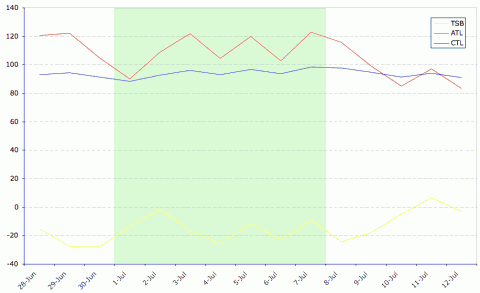 As the performance management chart shows though I didn’t apply the same large boost to my fitness (CTL) that I have on previous trips out here. I simply wasn’t doing the very long riding I’ve done before. Four or five hours was the maximum with some specific sections of harder work or deliberately hard climbing.

I still achieved a Training Stress Score (TSS) of 950 over the 8 days, enough to cause this more gradual rise in fitness. I arrived in La Santa having let my bike CTL drop to around 88 with some easy days. I left with a bike CTL of 97 so in reality a reasonable shift. That said with some very necessary easy days following the camp CTL is dropping to only 1 or 2 points higher than when I left.

This more gradual gain is entirely what I hoped for though. I could never reasonably expect to make massive growth of bike fitness whilst pushing so much on the running. To make an overall steady climb from this region in the nineties seems ideal. Worth noting is that whilst this year I’ve twice managed to maintain a CTL around 120 in the lead up to races (and biked well) last year I never went over 100 in my run up to Roth, UK or Kona.

I was doing much better work on my running back then too so perhaps the kind of work required to develop my run well will preclude such hard bike work. Slow growth in cycling fitness with the potential to raise CTL further later is perfect if it’s going to allow major growth in my run. I certainly can’t complain and recent experiences have cemented a number of more structured session plans into my week.

I think I’d like to carry a CTL around 95-100 into ITU Long Distance Worlds. After that race keep active on the bike for recovery and perhaps increase my bike emphasis in the final Kona build. Clearly the balance between cycling and running will need to be monitored closely to ensure I’m making positive progress in at least one at any time.

An amazing week for running. I really enjoy the running around Club La Santa and don’t seem to grow tired of any of the roads and trails. It can be quite challenging with hills or you can pick easier paths. I was clearly running a lot to build up 99 miles in 8 days. With my 100 mile run challenge starting on Monday it’s a confidence boost to see how close I was. I’m glad I wasn’t tracking numbers so closely that I felt obliged to go for it early 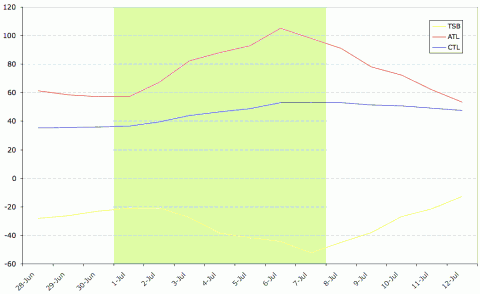 It’s a different story in the performance management chart here with CTL rocketing up from 36 on arrival to 53 on departure. Once again the mass of fatigue I’ve built up is seeing the CTL fall a little, but we’re still in very solid territory. For comparison 50 is the peak CTL I held before either Roth or Kona. Good runs have come off the back of building to this number.

I’ve been pleased to discover I can handle such a rapid build in running and just keep going. Even more significant were the one or two higher quality sessions I achieved in the middle of this massive build. A tough half-marathon run at a reasonable pace and at least one fast run chasing Roger. The right motivation could pull me through some tough times and get me moving. This is something to remember out on the race course.

Next week the 100 mile run challenge begins on Monday. The aim is to complete a Lydiard style 100 mile run week and see how it feels. Of course I’m making it more of a challenge by still biking and swimming. I will at least be holding back on the load from the other two to boost the chances of finishing. Exactly what my chart will look like after that training will be interesting to see, also the question of whether I can maintain it!

For those interested it took a TSS of 885 to run almost 100 miles. That’s more TSS than I log on the bike some weeks! I at least know what to expect on that side of things from next week. I also know I need to run more than 10km a day in order to maintain my CTL around the 50 mark. I guess I’ve got some work cut out for me.

One thing I can tell you plans of falling straight back in to hard training have fallen to the wayside. Friday I was so tired and sore from travel I couldn’t manage anything more than a massage from The Tri Touch. A painful experience which I think is doing good, but today the lethargy continued with a splash in the lake and an easy run. Tomorrow I hope to do just a bit more.

With serendipitous timing Chuckie V posted an article about getting over training camps. I think it helped filter into my mind and remind me that I’d just done the equivalent of an Epic Camp and need to recover. Smashing out a distance or time goal this week isn’t the priority, but being ready for the next big block of work is.

That block of work is imminent to. Starting Monday and ending a few days before the Long Distance Worlds I’ll be pushing once again. The aim is a 100 mile run week followed by a more balanced week still with a high volume of running. For the ‘taper’ week I’ll start with one or two tougher days based on intensity not volume then properly ease up to hopefully race well.

Beyond that race I’ve not made detailed training plans yet, but it’s on the long to do list. I know running will still be the focus, but I also know I want to push on the bike a little bit more. My training camp and some recent discussions have inspired me and given me new sessions to try. As well of plenty of solid riding there’s going to be some hard sessions in there in all disciplines.

I’ll have the fitness to support it and I’ve got the drive too. Knowing I’m already in my 2009 Kona shape is encouraging that I can genuinely work to make Ironman Hawaii 2010 an even better race.