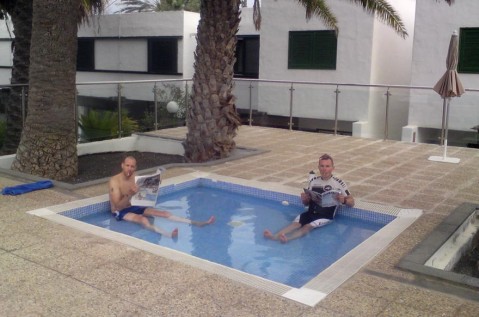 Whilst the cheap hotels of Puerto del Carmen may not be designed for athletes they do have some useful facilities. That’s me and Mark Racher cooling our legs in the kid’s paddling pool after another long ride. Much needed as the wattage and effort have remained high. In contrast I’m now staying at Club La Santa for some final Ironman preparation.

Mark has headed back to the UK, but (un)fortunately there’s still plenty of people ready to push me on the bike. It’s been good training with one of my athletes and seeing how they’re going first hand. Mark’s in great shape and I’m expecting big results in his coming races (no pressure!) It’s encouraging and I’m excited about planning the final months leading into Ironman UK.

I’d promised Mark a proper long ride and we managed to fit one in with four of us riding out for a 200km round the island trip. Mostly the Ironman route with a few extra hills and headwinds thrown in for good measure. As with the best of plans a mix up saw some of us climb Mirador del Rio twice, once from each side. It was a long and pretty epic day, but very rewarding.

An easier ride was planned for the following day, but Mark couldn’t resist pushing the pace up the hills. Then opting to take a longer route to La Santa via Femarer. When I picked up an anonymous rider on my wheel time trial mode kicked in. Despite tired legs I pushed the pace till I’d lost the unwanted guest and then Mark! I don’t like it when people don’t have the decency to say ‘hello’ before jumping on my wheel. It’s a sure fire way to get me to up the pace.

Having failed to take it easier I wanted to use the day we moved to La Santa to rest up. The logistics were more time consuming than imagined involving a lot more driving, a bit of shopping and the nightmare of parking in Puerto del Carmen. I finished the day with a ride across the island back to Club La Santa. For the first twenty minutes my legs protested, but eventually gave in. Somewhere in the lava fields they came to life and I found myself pushing hard to get to my new home.

So here I am in Club La Santa. I’d heard about it from friends who’ve stayed here. I’ve never stayed here myself and my initial impression last year was it’s a little weird. There’s this constant sense that everyone is checking each other out trying to gauge fitness. Kit up and roll your bike through the complex and it feels like everyone’s eyes are on you.

Where La Santa excels is the sports facilities with way more than a paddling pool for cooling off the legs on offer. The cost of living is more expensive especially for the budget conscious athlete (read poor!) However spending out on the evening buffet has proved worthwhile. It’s the most paleo I’ve been in a while, not just in terms of the lack of high carb food, but the sheer amount of meat I consumed! I’ve only outdone it at a buffet breakfast in Kona. I’m looking forward to days of hard training followed by big, big meals.

Determined not to put too much stress on my already tired legs I spent the first day here familiarising myself with the pool. Three trips to swim 15.1km overall and meet Mark’s challenge. A triple swim day for 15km was something he’d have done as a swimmer. Given I’d made him ride 200km round Lanzarote I thought it only fair I gave it a shot.

Besides an open air, 50m pool is always a pleasure to swim in. Fewer turns and more importantly the chance to work on the tan. I’m going for the minimalist tan lines I used to have on the Gold Coast. Not that it was all fun, three big sessions saw plenty of work done and some very tired shoulders. On my final session I died somewhere in the last part of the set. With a busy pool and my strength gone I eased up and swam down to get to 15.1km

Whilst doing such a big swim day was a challenge I’d set myself a secondary goal of ensuring I swam the next day too. I didn’t want to do all that swimming then be unable to get into the water for the rest of the week. I dragged myself back to the pool this morning after a heavy nights sleep. Just 3km (I am tempted to go back later this afternoon for more), but they didn’t feel bad. I’ve been faster a set of 100m saw me hitting the wall on 1:30 with plenty of rest between. Okay for now I’m hoping I can get into the swing of things over the next week.

I wish I could be as positive about my ride. It’s not that it was too easy or weak, at least the power file reassures me of that, but my legs felt so sore. I’m not sure they’ve ached like that in a long while. They put up a protest all the way to Femes, but seemed to come back to life somewhere around El Golfo. Despite feeling better I called the ride short at three hours when we passed La Santa. I’d rather they felt stronger than over do things on another long ride.

Just a run to squeeze in somewhere now and then that monster buffet. My hunger is returning so I’m ready to load up on meat once more.