As promised in part two I’m posting my bike training data from last week. It’s part of my peak Kona preparations and a period where I’m unable to run. During the week I also had over eight hours of swimming and spent a couple of hours in the gym. Volume isn’t low, but the focus has been on keeping sessions high quality.

What I hope this shows is what that means, but also where I’ve gone wrong. I’d say there were two good workouts, one reasonable session, one weaker than hoped and one that was pointless. There are a number of reasons for the latter couple primarily relating to nutrition and recovery. 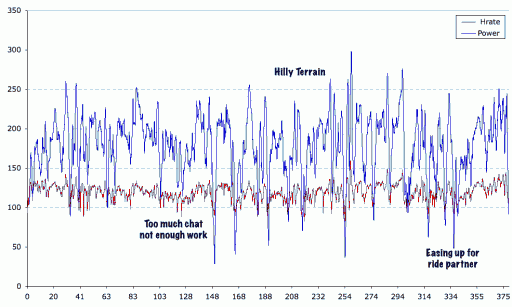 The week started on the middle day of a three day cycle block (day one had been mediocre). I’d scheduled a long ride with the aim of harder work later in the session. Feeling relatively fresh I picked up the pace for the first couple of hours and went with feel. After that I was joined by one of my athletes for his long ride.

Time passes quicker when riding with others so when there’s an opportunity I’ll take it. The difficulty comes where goals and abilities differ. In this case my athlete worked himself too hard to stay with me and didn’t eat enough. The result was a notable drop off in performance later in his ride. I’m not going to abandon a companion so I eased up and discussed training and nutrition with him.

The result was an easier long ride than planned and a lesson learnt on riding with others. When I head out for tomorrow’s long ride I’ll be joined by that athlete again. This time the route includes a shorter loop for my hard efforts. We can ride at our respective paces and meet up afterwards. It should solve the problems of long ride boredom and differing abilities. 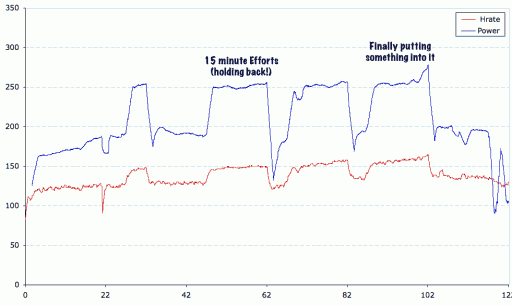 A structured workout indoors on the turbo! It’s been a while since I’ve done these and after blowing up during a previous week’s session I set lower goals. A threshold session is a key workout in the week and whilst this one verged on the bottom of sweet spot it was still of value. At least returning me to the mindset of turbo training.

I held back a lot, but in today’s similar session will put more effort in. It’s worth noting the impact in TSS terms as 2 hours of training provided half the TSS of Monday’s six hour ride. When looking at TSS you only get a relative idea of the training stress a session provides. The focus comes from the work done to achieve it.

No riding just a good session in the pool. 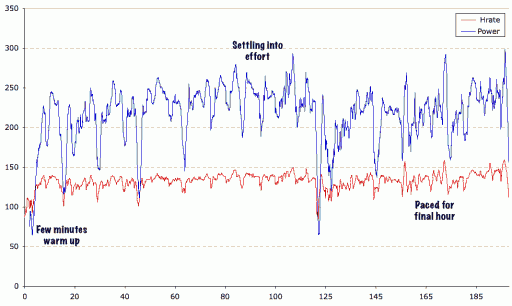 Wednesday was planned to allow recovery between the threshold session and the next important tempo workout.I was nervous heading into this one as it’s hard work from the go. Once settled I felt great and was driven to keep pushing the pace aware it would do my peak power figures good.

I stabilised at a slightly higher effort for the second hour and remained comfortable working hard till I was joined by another athlete I coach. His schedule had a shorter tempo ride and he paced me round a local circuit for the rest of the ride. It worked well and kept me motivated throughout.

The real value of this workout was the long duration spent at or above Ironman effort. In three hours I’d racked up almost as much TSS as an easier long ride. I’d also burnt through 2500 calories so the single 200 calorie bar in the middle was probably insufficient. It was a very motivating ride and encouraging when I felt cycling was on decline. 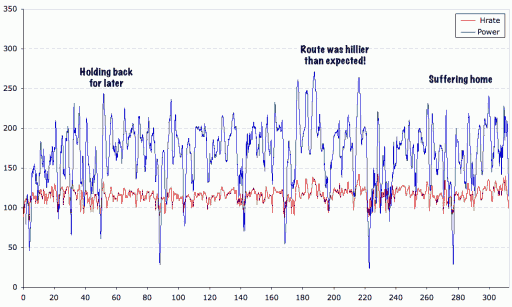 A second long ride in the week part of the next block of cycling. I was tired on Friday a combination of factors including the previous tempo session along with lack of sleep. I got out the door though and set off on schedule. Aware of the fatigue and Saturday’s harder session I held back on pace keeping 200W as a rough limit.

For the first couple of hours it worked well, but I soon started to suffer. Combined with my light bike nutrition I was tiring fast and the latter half of the ride became a struggle. I was determined to keep a reasonable effort, but was now chasing that 200W figure. My route choice aided a little as I accidentally threw in a host of tough hills!

I sustained some effort in the final portion home, but really felt I’d under performed. Not entirely happy I resolved to recover and hit the next session hard. 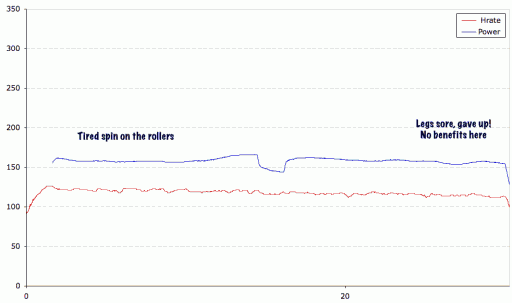 What’s obvious is I didn’t hit the session hard! Fatigue carried further through than expected. After working over at the Tri2O Swim Centre in the morning I headed to the pool and gym. One positive for the day was a 15 minute run at easy pace at least my run form was generally good. The weights that followed really fatigued me and when I got in the pool for a short swim 1.5km seemed a lot of effort.

All the signs were that I was in no shape to perform the planned threshold work. So I took the decision to have an easy spin in it’s place. That lasted thirty minutes before I decided the fitness benefits were zero and the twinges in my legs weren’t being helped. I’d already totalled up over 800 TSS on the bike this week so it wasn’t like I was being slack.

I’d had ideas about moving the threshold session to the Sunday. An early start followed by 8 hours marshalling at the Reading Triathlon put pay to that. I’d still not slept enough nor ate well enough to feel ready to perform that workout. I opted for a proper easy day fitness is progressing and at this point more rest will do no harm.

I took time to reflect on some of the issues with my own training. There was plenty of TSS being recorded and I’d started to develop a good balance of bike sessions. Recovery was an issue relating to two primary factors occasional poor sleep and insufficiencies in my diet.

The poor sleep tied into the dietary issues itself. There are bad habits of going to bed too late and getting up earlier than I need to. Then I often wake hungry in the night and it makes me restless. An obvious sign that I’m under eating. My obsession with being light sometimes dictates my behaviour in ways that go against performance. 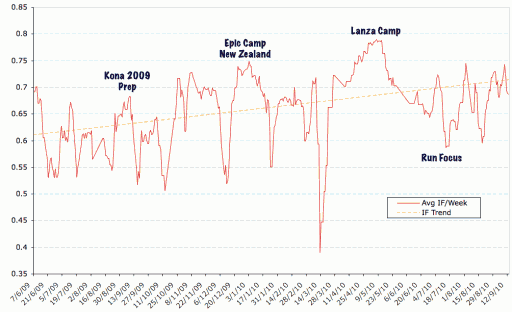 I knew I’d been working harder on the bike enough to want to look at the weekly average intensity of my cycling. There’s been a clear increase since last year and whilst it’s not as high as blocks in New Zealand or Lanzarote it’s consistently higher than it was. Each week there’s more higher intensity work and a little less easy riding. Looking at the intensity of many of my rides prior of Kona 2009 was surprising.

I also know during the two most intense blocks this year I was taking in more dietary carbohydrates than I currently do. I need to be more paleo for athletes than pure paleo it was time to look closer at what I was eating. I’ve stepped back and realised I needed specific carb meals based around some of my training. Not too much, but enough to ensure glycogen was there to work at levels above endurance.

This is off topic from the aim of this post, but hopefully will be of some use. Putting more focus on intensity in your training requires you to match your diet to it. Whilst I believe carbs are overused a lot by athletes, correct timing and a reasonable portion help support higher intensity performances.

I’m no longer in a phase where my training can rely on fat burning at lower intensities, I’m starting to utilise more glycogen on top of this.

The aim was to give examples of the kind of riding I think forms part of a balanced program. Every athlete responds differently to training though and you’ll have seen I failed to stick to my initial plans. Ultimately you have to listen to your body data is there for guidance, but feel remains an important factor.

Working at higher intensity during the week puts greater demands on recovery and nutrition areas I have a long history of weakness in. It’ll be interesting to revisit the topic a little as I adopt some changes to my eating habits in the hope of having more energy whilst targeting race weight.