The best way to appreciate the Performance Management Chart (PMC) is through examples. To back up my last post on the PMC I’ve picked a few periods from previous years. I’ve tried to choose both good and bad so you can see some of the patterns to look for in your charts.

As with many aspects of training I can only offer guidelines based on experience. What worked (or didn’t) for me may not apply to you. One of the biggest reasons to plan a test race in the build to a key event is to ensure your taper plans work. I’ve written a lot about tapering with the PMC before and will be writing about my Kona taper plan next week. 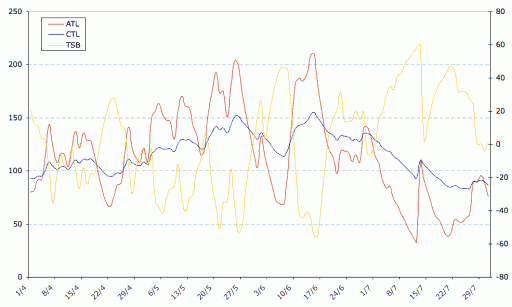 I’ve written about this pair of events before. Apart from being my first experience of Epic Camp it’s also an example of what not to do prior to your A race. I went to Switzerland aiming to qualify for Kona. To achieve that I focussed on training as hard as possible and not on tapering and recovering. By the time race day arrived I was well trained and tired. I didn’t qualify.

The main mistakes I made in this period were training too hard into an event like Epic Camp and not allowing sufficient recovery time before my race. Fear of the camp pushed me to train harder and less than a fortnight out I was effectively doing my own personal Epic training. I went into the camp tired and sick, but struggled through.

Rather than tapering down to my race I opted to take a little recovery and then keep CTL up. This was hard work in itself and all I was effectively doing was tiring myself. When it does come time to taper there’s a huge drop off in CTL before the race. Combined with the large drop from Epic Camp levels I was nowhere near peak fitness.

The last two years have shown me that focussed blocks where you really ramp up training are a good way to improve fitness, but you need to time them carefully. As later examples will show place them further back from your key race, allow good recovery time and then rebuild to a sustainable fitness level. This allows a more effective taper when the race comes rather than crashing down. 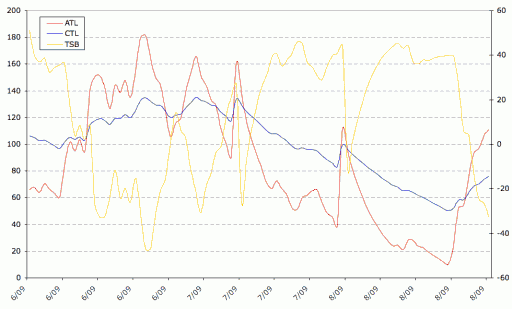 An unusual combination of two Ironman races three weeks apart. Despite the tight gap the combination worked well. One of the most significant differences between this and the 2008 example is the level of fitness I’d achieved. Having been full time for a year my ability to absorb more training stress was better developed.

There were no training camps in the build to Roth instead I rapidly returned to training after my disasterous race in Lanzarote and lost little fitness from the island. The progression of CTL is gradual and a little more manageable. A small blip in training in the run in to Roth was balanced out and I adopted a brief week long taper for the event.

After Roth any plans I had to train through to the UK were put on hold as I dealt with fatigue. It was an extreme taper and it shows in the decline in CTL. Small bouts of training, primarily on the bike stopped a complete drop off. Even so the interesting factor is how well I performed in Ironman UK despite not following usual taper rules

The PMC is a guide and can help point you in the right direction, but don’t be beholden to it. Sometimes you won’t physically be able to shape the chart the way you intend. It’s not a reason to panic there’s opportunity to perform better than expected and perhaps to learn something new. I’d not expect to race well on such a high TSB, but it seems the importance of these values can be overrated! 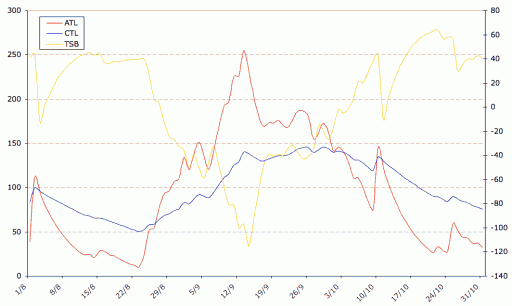 Nothing is going to focus the mind and body on training than qualifying for Kona. So when I got my slot at Ironman UK I was disciplined and took a few weeks off before launching myself on an ambitious plan. There’s much steeper growth in CTL particularly focussed around a week in the Pyrenees where you see the sharp ATL spike.

As mentioned focussed weeks are effective at rapidly lifting CTL and whilst this was close to my race CTL was sufficiently low I could maintain the resulting level. You’ll note a dip in the following week as once again big training required big recovery. It’s another reason to use them sparingly as my preference is for steady growth of fitness.

Having reached a higher level of CTL I was able to maintain this until I started my taper about ten days out. Then it was a controlled decline in CTL and a rise in TSB. This was probably one of my most planned taper periods to date and the point when I first focussed on using the PMC in the process.

I decided to utilise separate run and bike PMCs in order to manage the training and tapering of each individually. The overall chart I’ve presented gives an idea of the general state of training, but separating the sports allows clarifications on individual aspects of preparation. It was clear that goal TSBs needed to be different for the two disciplines. 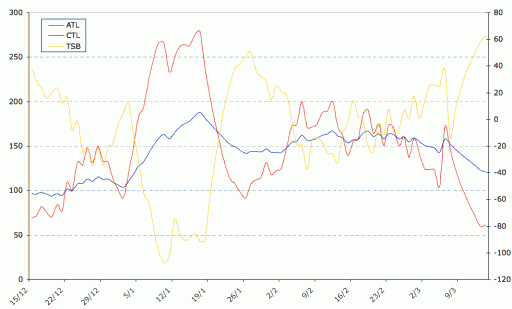 This is the clearest example of how to use a training camp early in the season. It’s also a good example of how far you can push yourself with the right motivation. If I guided myself by the PMC alone would I have kept training harder as my TSB dropped below -100? Again the charts are a guide and ultimately you have to judge by feel.

This camp was over six weeks before my next race which allowed a proper period of recovery with a drop in CTL. The impact was so big that once recovered I was able to continue to develop and maintain a CTL well above previous levels. I effectively plateaued in February unable to raise fitness any higher.

Not an issue as I was rapidly closing in on Taupo so before long was tapering down. By the time Ironman New Zealand arrived I was thoroughly recovered and had a well balanced CTL, ATL and TSB. Tapering was then a straightforward process of managing training in the final ten days to achieve my targets with these numbers.

As you’ll see in previous tapering articles I look to achieve certain trends in my PMC chart during the taper. Generally if the change in CTL and TSB follow certain patterns then I can expect to be racing in the right condition. The further I diverge from these the greater the chance I’ll hit issues. 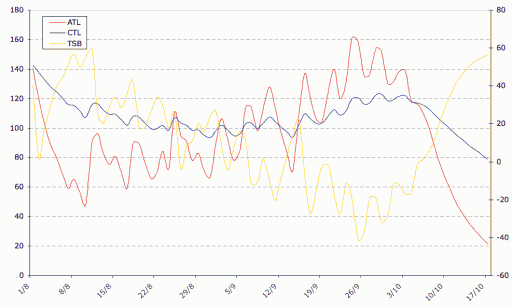 Finally a work in progress very near completion with only the taper to speak of really. The build into Kona this year has been distinct from my previous racing season. Last year’s PMC looks like the profile of a Tour de France mountain stage! Peaks and troughs around races with sharp ascents and descents. By racing less in 2010 I gave myself more opportunity to gradually progress CTL.

This growth in CTL fits much more with my advice of consistency. The previous tight schedule forced me to routinely ramp training up to restore CTL, taper, recover and repeat. For Kona I’ve gone from a peak for ITU LD Worlds, recovered and then slowly rebuilt CTL.

An important note is this slow growth comes purely from my cycling. The calf related injury that’s prevented consistent running has had a major toll on run fitness. Take a look at my run PMC below to see how CTL has gone into freefall. It raises interesting questions about the affect of detraining in specific sports when you’re still very active in the others. 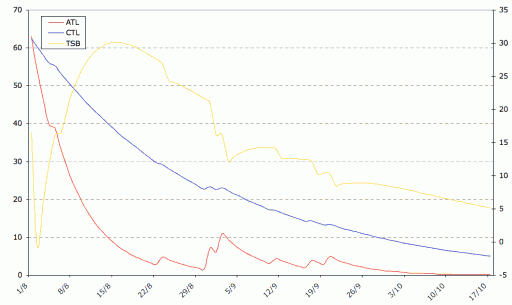 My bike PMC chart for the period (below) gives a much cleaner example of a steady build and progress of CTL. Training has been less consistent than I might have liked with occasional large fluctuations in ATL. The overall effect has been increasing CTL and a manageable drop in TSB. Allowing stepped recovery of TSB gives much more opportunity to perform in subsequent workouts. 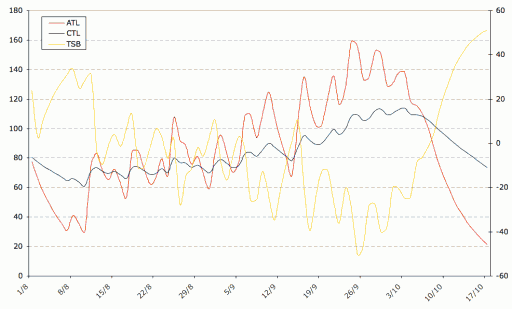 As I plan this winter’s training I’ll look to follow a similar pattern of gradual, stepped CTL growth that manages ATL and TSB levels to keep me fresh. With a return to better run training (I hope!) this will be a little more challenging, but using the PMC as part of the process I can attempt to structure my training in a sensible way.

Hopefully this handful of examples gives a better picture of how the Performance Management Chart looks in action. It’s impossible to provide an exact set of rules based on it, you never know how you’ll respond until you try. What didn’t work one year may work another as you develop athletically.

Generally avoiding sharp increases in CTL or drops in TSB is advisable particularly close to major events. These can be useful as part of deliberate overreaching, but equally they can be indicators of a path leading to overtraining. In careful doses fine, but trend too far that way (as in my 2008 season) and you may find you suffer.