Jet lag, heat and humidity are the issues facing an athlete coming to Kona. Since arriving on Sunday I’ve not managed a decent night’s sleep. It was catching up with me by the end of Thursday and I crashed out early. The next time I was fully conscious it was 6am and I’d slept over eight hours.

The contrast with Thursday morning when I woke with a headache and sneezing was remarkable. I’d been taking a double dose of Biestmilch Chews since arriving on the island in the hope of holding off a cold. An easy day, plenty of fluids and a good night’s sleep seemed to have cleared the symptoms.

From a training perspective the best news was the pressure in my ankles had cleared. I think a combination of long haul travel and the climate had me retaining water. It’s taken a while, but five days in I’m acclimatising and recovering from the journey.

It was an overcast and relatively cool morning though the humidity was noticeable. I headed out on my run shortly after I woke a sure sign I was feeling better. My aim was a ‘long‘ run of an hour, a test of my ability to run for some distance.

I kept the pace easy and headed round to the Queen K. Most triathletes were swimming so it was nice and quiet on the highway. I reflected on how good it was to be running again and recalled last year’s race for inspiration. Two months ago I was aiming to run my fastest Ironman marathon now I was happy I’d be running.

It wasn’t a perfect run the left calf tightened despite calf guards. With twenty minutes to the hotel I focussed on run form and relaxing my legs. It eased the problem a little and reminds me of the importance of that focus for race day. Maintaining good run form and managing my effort will get me to the finish. 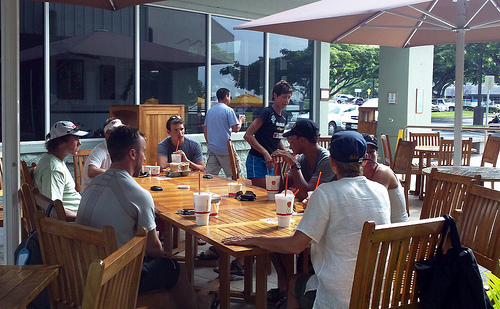 A quick turn around after my run and up Palani to meet the Biestmilch Gang for breakfast at Jamba Juice. When the crew arrived from their swim I was surprised to see fellow Epic Camper Rip amongst them. It was great to have a better catch-up with Rip after the all too brief meeting in Immenstadt.

We chatted about all the Epic Campers who’d made it out to the island this year and the soon to be released documentary of Epic Camp. There’s rumours of an Epic Camper get together next week and a chance for us to see the documentary ourselves. I suspect Rip will be a big star of the show.

The sudden improvements in my condition had me thinking about acclimatisation. My experiences last year are almost identical – the soreness in the legs, the high RPE and sleep issues. Notably the time scale for adaptation was much the same. It’s reassuring to knowing that next week I’ll feel like myself again.

I enjoy racing in hot conditions and feel they work in my favour, but it’s reliant on being acclimatised. As I ran along the Queen K it reminded me of my time on the Gold Coast. Cool and cloudy, but still perspiration beaded on my forehead. That headache on Thursday was almost certainly from dehydration fluid requirements increase significantly here.

Reading further into the process of acclimatisation produces an interesting list of factors impacting performance. Key amongst them is blood plasma volume. In hotter environments the body increases blood flow to the skin capillaries to cool it. With more blood going to the skin that’s less oxygenated blood for the muscles.

That high RPE and heart rate are a result of the body having to work harder to deliver sufficient oxygen to the muscles. The biggest adaptation that takes place in acclimatisation is an increase in blood plasma volume allowing the body to supply both muscle and skin capillaries fully. The need to keep core temperature down no longer competes with the need to supply oxygen to active muscles.

The adaptation process can take up to two weeks to complete. You have to accept that until then your RPE levels will be above normal. I know it took around ten days last year before I felt right. It’s one reason I head out to Kona so early.

I moderate these session relying on RPE more than power or pace. The wattages during my threshold session don’t match the RPE for that ride. I aim to work as hard as I can, but accept I’m not going to see data comparable to home. The closest match are turbo sessions where the lack of airflow and build up of heat create a similar environment.

Ultimately the main focus of any training is its place in the taper. If this helps with the acclimatisation process that’s a bonus. It definitely helps to be training in the heat and helps speed up the adaptations even if it’s a painful process. I’m looking forward to feeling like normal in the coming days.