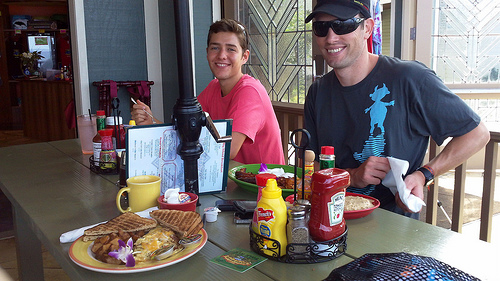 Another day another breakfast! Technically two breakfasts as I started at Lava Java with Nick, Laura and Andrew before moving on to Humpy’s with Nick and Mark. It’s a good job we had a solid bike ride planned for the day! It must be a sign how relaxed I am that I was willing to have two breakfasts (and ate the toast).

Breakfast wan’t the only thing to come in pairs as again I crashed out early and slept through till 6:00am. On one hand I like that 4:30am starts mean I’m in sync with race day, but I’m loving the extra rest and feeling better for it. I didn’t want to get up when I woke this morning!

I’d arranged to meet Nick down at the pier at 7:00 so couldn’t sleep in. Nick qualified at Ironman Austria and wanted some pointers for his first time on the island. Once again there was a large group of the Brits down there, but with most of them planning to swim the full course Nick, Laura and I just headed for the final orange buoy.

There are lots of signs that the race is coming. Sponsors’ logos cover shop roofs in town and banners hang from street lights. Temporary tri stores have opened up in any spare units on Ali’i Drive and they’re filled with passing triathletes. The pier is packed for the morning swim and Kayakers watch over us all the way to the far turn. You no longer feel so isolated out there.

After the swim and double breakfast I arranged a ride out to Kawaihae with Nick to show him some of the course. Before I’d made it back to the hotel the skies opened and it started to rain. I’ve heard the grumbles about the weather back home here it’s a relief from the heat and humidity.

My plan was to repeat Tuesday’s ride. Steady out to Kawaihae, stop to enjoy a huge cup of diet coke then ride hard home. The rain had eased, but it remained overcast so conditions were perfect, not too hot and light winds. I had to warn Nick that race day could be far tougher.

We cruised out at a comfortable pace that felt much easier than Tuesday’s ride. It was great to chat about the race and to see that first time excitement in Nick. Brought back memories of last year I’m excited to be here again, but the first time is the best.

The shops at Kawaihae were a welcome break particularly the huge cups of chilled drinks they’re a bargain and a couple of hours on the Queen K works up a thirst. As we discussed Powerbar flavours (Chocolate Peanut Butter is particularly nice) Rachel Joyce rolled in for a quick fluids stop. She was barely there long enough for us to admire her Team Abu Dhabi Storck bike before she headed off back to town.

Nick and I were more chilled and took our time before cruising back to the Queen K for the push home. I worked into my race pace and felt great, none of the struggle of Tuesday’s ride. Unable to resist I pushed the harder and held it through to the airport easing off to spin the final 10km back to town.

Back near town there’d clearly been a lot more rain and it was pleasantly cool. Whether conditions or acclimatisation were the cause the ride felt amazing. RPEand heart rate were normal with power 30W higher than Tuesday on the return. I’d gone a little too hard more like Half-Ironman pace than Ironman pace. It’s nice to imagine I’ll be able to run well off a bike like that next year.

My taper plan had a 45 minute run to finish the day, but having woke with a tight calf I’d decided to give an extra day’s rest before I ran. It’s all about going on feel and judging what works best for my body. The calf had loosened over the course of the day, but didn’t need extra strain. The run will be just as valuable tomorrow as today.

Seven days and it should all be done. Tomorrow has a couple of decent sessions to be done and then I can properly rest and recover for race day. I’m still feeling relaxed and recent training is boosting my confidence. The run remains an unknown, but I’ll get a lot from race day whatever happens.