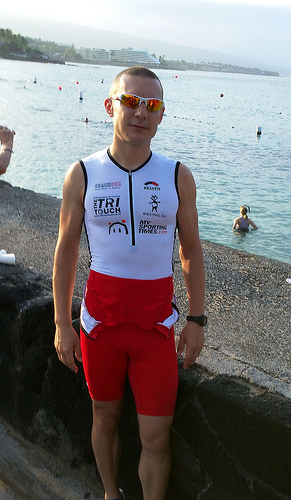 It’s race week in Kona and there’s a change in atmosphere. The pier is heaving with athletes, there’s an official bag drop instead of the wooden shelves and Biestmilch are handing out swim caps. The danger of collisions has increased exponentially your safest bet is to sit on someone’s feet till you’re clear.

I’d decided I’d join Steven and Roger for a full loop of the course as my final long swim before race day. It also seemed the perfect chance to test out race kit and see how it performed. I’d not swum in my bright red Skinfit Speed Suit so was keen to find out how it felt.

Tight is the word. Reminiscent of last year’s swimskins I soon found some sore points on the way out to the turn buoy. There’s going to be some serious application of Bodyglide on race day. Otherwise the suit performed perfectly though it’s hard to say how much impact it had.

Swimming with Steven gave me a chance to confirm I’d improved. Past performance would put him more than five minutes faster for the Ironman swim. I reached the first orange buoy shortly after him and when we left for the far turn around could sit on his feet.

Drafting makes a huge difference and for a while I cruised along behind him. I was enjoying it and thinking I could look forward to an easy ride to the turn. Suddenly Steven put in a spurt and moved away. Try as I might I couldn’t get back on, but the big positive was I held him in sight the entire way to the buoy. I’m certain I couldn’t do that a few months back.

Once again the time at the far buoy was disappointing, but as we waited to regroup we drifted towards the pier confirming the current was against us. Steven set off at a harder pace for the return and my attempts to get on his feet completely failed. With a lot of ocean to cover I soon lost sight of him and made my own way back in. A slightly more curved course than my journey out I think.

I’m starting race week with an easy day so with the long swim done the only task was a relaxed breakfast and a some window shopping along Ali’i Drive. Wandering back to the merchandise store in the King Kam to commit a few dollars to the brand (no cookie cutters) I discussed the swim with Steven.

Last year’s 1:09 was a disaster, slower than I feel I was capable of. It wasn’t helped by starting on the right side and being funnelled into the centre, but my placement in general was poor. Where you start is critical in Kona as you’ll likely be stuck with the group for the whole swim. With my improved swim I need to think more ambitiously and place more aggressively.

I was pleased to see the return of the A.R.T. therapists at the King Kam. Like any triathlete I like a freebie and the massages I received last year worked well. I had an Aussie (from the Gold Coast too) masseur give my left calf a good work over and plan to make the most of this the rest of the week. Anything that could potentially alleviate my calf issues is a good thing.

My day finished with a trip out to the Biestmilch house for a get together of their athletes and ambassadors. We broke the ice with Stuart Anderson and I comparing swimskin scars with Ronnie Schildknecht! Interesting to chat power with Ronnie later and learn he had similar experiences on arriving on the island. High RPE and low power all be it about 50W higher than I was putting out!

Biestmilch’s uber-chef Kjell put on an amazing feast and I am still absolutely stuffed. I held back too, but can’t wait to see what he’s doing for their post race party in a week’s time. The gang of Biest athletes are friendly and the evening was a lot of fun.

It’s a late night for me and there’s a busy day ahead. Small quantities of swim, bike and run and the important step of registration. The queues will be big, but I’m definitely a get it done first thing athlete. It all finishes with the Parade of Nations along Ali’i Drive. Race Week is really here.