Three more training days to Ironman. Not that you should be training, if you’re not ready now it’s too late. My taper plan involved swimming, cycling and running I think two out of three isn’t bad. Waking with the same lethargy as Tuesday I decided not to swim given my aim was just the Coffees of Hawaii espresso. 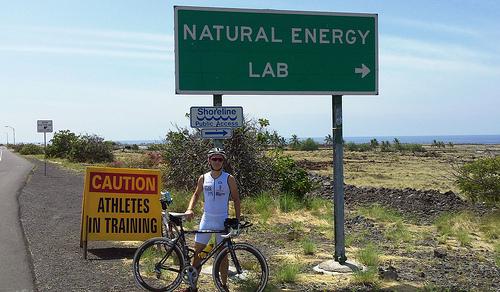 A lie in would have been nice, but close to a race I prefer to train early so was in my race kit and out on the Queen K by eight. With the temperature rising I started my first race pace interval watching heart rate as I pushed towards the airport. I committed a sin and feeling good allowed my effort to drift a little too high.

The light taper week and extra recovery leaves me fresh enough to push harder. Fine for a 20km ride, not so good for 180km. I kept the effort up to the airport where I eased off and turned. A little concerned that I’d lost my pace judgement from training harder on the bike.

Having worked harder than intended I should have soft pedalled home, but feeling good I dropped onto the aerobars and settled into race pace again. A more controlled effort where I carefully monitored my heart rate making a conscious effort to manage intensity over the hills.

I was back at the hotel ten minutes quicker than Tuesday’s spin. More work than planned, but at least a short session and I felt good. With no time to hang around I changed shoes and went out on a brick run.

I like a short loop from the Kona Seaside that heads round to the Queen K, up the rise to Palani and back down. It avoids Ali’i Drive’s crowds and takes in a portion of the run course without being very long. My calf tightened, but I wasn’t worried as I’d be at the A.R.T. tent straight after.

Ideally you stick with a good therapist, but with plenty of athletes you don’t have the choice. I had my third therapist today and again he applied slightly different techniques. This time the aim was to help with the movement of the certain nerves through the muscles. I walked away with no tension in the calf, but feeling surprisingly fatigued in my leg.

Trained and massaged my only other aim for the day was to see the expo. Race expos can be fun and you get to see lots of different tri kit, but it’s also a tiring experience. It’s not the time to be standing on your feet all day. The best approach is setting aside a couple of hours to see it all. After that however tempting try not to return.

My main purpose for the trip was to visit the Spidertech booth. I’ve seen kinesiology tape in use at races round the world. In theory it could help with my calf issue so I wanted to give it a go. Best case it would genuinely help, worst case I’m a tri geek with coloured tape stuck over his leg.

I waited in turn until a physio was ready to see me. She spent some time examining my calf and also loosening my right hip. Having seen a number of therapists over the past few months I’ve had a diverse set of explanations for my calf problem. They tend to run along common themes and seem logical. I suspect the truth lies somewhere amongst them all. 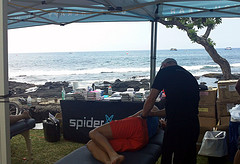 The Spidertech physio honed in on long standing issues with a weaker right leg and tendency for it to ‘collapse‘ inwards. When I run I focus on keeping hips balanced and good posture, but notice that while my right footfall is quick my left feels slow. My body compensate for the ineffectiveness of my right leg by spending less time on it and putting additional load on the left.

Once she’d opened the hip more she applied Spidertech tape to my right hip and left calf. The combination should ease the tightness and encourage better run posture. There’s mixed research on the tapes effectiveness with no real stand out evidence. I want to test it for myself even a placebo effect would be welcomed.

Last year before leaving Kona I bought a pair of K-Swiss K-Onas. They were half price and incredibly comfortable on my swollen, sore feet. Since then they’ve done many miles of walking, but no running. I loyally stick with a trainer brand and it takes more than good looks for me to change.

My loyalties changed at the K-Swiss booth. I couldn’t resist trying the bright red Blade Light Race. They’re light and have a velcro closure system for transitions potentially a perfect Tri runner. Except they didn’t fit well on me feeling too loose for running long. Despite the overly light uppers the sole gave an amazing sense of bounce to my stride.

I was so taken with the feel I decided to try the basic Blade Lights Run. A traditional trainer upper with the same super bouncy sole. A couple more laps around the parking lot and I was sold.

The parking lot test doesn’t compare to running a marathon, but I’m genuinely tempted to race in them! I’ll test them along with the Spidertech tape on tomorrows short run. I can see the debate over which shoe to use running until bike check in on Friday. The Blade Lights are so much livelier than my current racing flats.

The day finished with an Epic Camp gathering at Scott Molina’s Condo and the first chance for us to see the documentary of this year’s New Zealand camp. The DVD has just been released, but none of us had seen it. I don’t feature much (I avoided the cameras) which given my weight at the time I’m glad of! It’s a great film though and brought back lots of memories.

Tomorrow I’ll be helping the Biestmilch crew hand out T-shirts at the pier first thing. They’re expecting it to be hectic the caps, tattoos and shirts are very popular. Once that’s done it’s the test run, a coffee swim and then chill until the Opening Ceremony in the evening. I don’t plan to move from my room much!