Building a training plan to take me to a sub-9 Ironman starts with setting targets. It’s the easiest step, designing the program and following it will be tougher. Targets are essential in building the plan they give a focus to workouts and a benchmark for testing performance.

I could set simple goals to ‘go faster’ or ‘work harder’, but generic ideas provide little direction. Specific paces or power can be measured, tested and compared allowing a feedback cycle into the training program. If I’m not making progress I’ve time to adapt the plan and focus on what’s holding me back.

The goal is to be on the bike with an hour on the race clock so my swim pace needs to allow time to get through transition. Austria is relatively long and I’m not the fastest between swim and bike, I need four minutes at least. Working back gives a swim target of 56 minutes for 3.8km or a pace of 1:28 per 100 metres.

Having a target pace gives a point to measure swim performance against. The coming months need to focus on reaching the level where I can sustain 1:28 per 100 metres. If I can’t manage that I’ve little chance of doing it on race day without expending too much energy in the water.

I need my Critical Swim Speed (CSS) to be faster than 1:28 to ensure I can comfortably swim that pace in a race. Ironman New Zealand backs this up – I swam 58 minutes for a pace of 1:31 per 100 metres tallying with my CSS at the time. A Wetsuit and drafting provide sufficient performance benefits that I know once CSS reaches 1:28 I can hold that in an Ironman.

To achieve my swim PB in New Zealand I had six weeks of consistent pool work with average distance close to 20km. There was a spread of sessions focussing on endurance, technique and also swimming at CSS to develop threshold. A month of similar training proved equally effective for Kona where I took three minutes off my previous time there.

The longer timeframe leading to Austria allows me to incorporate regular CSS testing into the regime and ensure my program is heading in the right direction. The consistent mix of sessions that’s worked well this year will remain, but testing enables me to tweak the plan and adjust timings.

I’m going to be bold and set the goal of a 4:45 bike split. It’s 10 minutes faster than my current Ironman PB though Austria is potentially a faster course than Western Australia. That’s still a step up especially considering I want to be riding at a comfortable effort.

I’ve taken confidence from the 5:04 in Kona if I can do that now what will another six months of hard training achieve? The lack of run training makes it hard to tell if the subsequent marathon was affected by the bike. There were bigger issues than how hard I’d ridden.

I’m focussing on developing the power I can ride an Ironman at. Metabolic testing suggests that I can fuel anything up to 250W enough to spare glycogen for the run. I’ve yet to ride an Ironman close to that my best approaches 230W so there’s room for advancement. In 2007 I raced Austria averaging 190W for a 5:12 bike split, 50W more would be a significant move in the right direction.

Over winter bike volume is dropping whilst I turn my attention to running. I’ll maintain the dose of intensity with work to develop threshold power and sustaining Ironman pace. Endurance work will return in Spring, spending more time on the bike a lot of it working on the ability to ride an Ironman ‘hard‘.

After recent months any target marathon pace seems ambitious and aiming for three hours particularly so! That’s 4:16 min/km (6:50 min/miles) and 15 seconds per kilometre faster than my current Ironman PB. I know I can sustain that pace during a seven hour race from Immenstadt. If I achieve that run form how much impact the extra two hours of Ironman will have is an unknown.

Similarly to swimming it provides a baseline, I know that I need to be able to comfortably sustain 4:16 min/km pace for at least two hours in training. It’s essential that running at that speed is easily manageable with minimal perceived effort. Ironman running is about efficiency whatever speed you achieve it needs to be at relatively low exertion.

Having discussed run training in my last post I’ll not go into detail, but reiterate key points. The aim is to build back to running high volume over four months. I’m unlikely to run as much as I did before, I don’t think every mile of the hundred mile week was essential for developing run form. The growth in volume will be gradual and so more sustainable.

It will culminate in some testing Spring races to see if my run has stepped up. Assuming my Ironman marathon should be within 10% of a standalone marathon I’m looking for a 2:40 standalone. I’m not a fan of marathons in Ironman prep, but can handle a half. If I can manage a 1:15 in March I’ll know I’m on the right track.

With targets set the next step is to work on a plan that can deliver the results. The past two years have been about the volume of work the next is about the quality. That’s not to say there won’t be volume, but the emphasis will be on ensuring I’m doing the training needed to reach these goals.

Of course the big step is embarking on the plan. 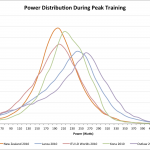