The results from my testing with Peter Byworth and Metabolic Solutions are in and I’ve had time to study them. The broad details from my initial post are all confirmed by the raw data so I’ve dug further with help from sports scientist Greg May. Greg’s already looking into this area and was keen to see my data, given the input I’m glad I shared!

I always knew this would be too late to have real influence on Kona. The concepts I’m learning need practice before I start racing with them. I’m reassured my fuelling strategy and pacing will comfortably see me through. What’s clear is modifying aspects of training and being more precise in racing will help take the next step.

The tests started by measuring my Resting Metabolic Rate (RMR). Basic information that’s main use is ensuring I’m more precisely aware of my daily calorific usage. This identified the 80:20 Fat:CHO utilisation ratio at rest which indicated that the Paleo diet is ideal were I a sedentary individual. As discussed training in high volume is a wildcard that demands significantly more carbohydrate. 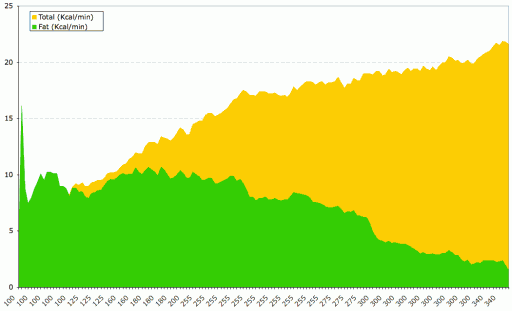 This colourful chart summarises the results of 20 minutes work and pain on a bike. We have the total Kcal being utilised per minute in yellow with the portion coming from fat in green. Along the x axis is the wattages I was holding at that point in time.

I warmed up from a low base of 100W through to 200W over several minutes not spend much time at any of the intensities so I never stabilised. Below 200W (and probably a little higher) I get comfortably over 60% of my energy from fat.

Beyond warming up the first step required me to hold 255W. I found a comfortable position with cadence around 90 (higher than I’d expected) and power on target. This continued for four minutes before we ramped to threshold and beyond. Greg would like longer spent in this region something to consider next time. It would give my body a better chance to stabilise at the intensity and more certainty with the resulting data. It sounds like I may need to suffer more next time!

We progressed the testing to threshold (around 300W) and held there for four more minutes (this is the one that’ll hurt for longer). From then on it was a ramp till failure a compromise to see roughly where that was and what was going on.

As you can see in the graph I’m still getting a lot of Kcal from fat at 255W and even at threshold don’t do to badly. Extend that all the way to failure and fat is still a contributing factor for me. From Greg’s perspective 2.5g CHO/min (10Kcal CHO/min) represents a key turning point for Ironman racing.

What’s special about 2.5g of Carbs?

As the results show with increasing intensity the body utilises it’s fuel sources in differing ratios. CHO becomes more significant as workload rises. The body contains a limited supply of CHO (as glycogen) in the muscles and liver and an effectively limitless supply of fat.

Fat is never likely to be the limiter working at low intensity I could last a long time on liver and muscle glycogen stores. Increase intensity and duration of work and there’s the potential to become limited by available CHO. The harder you work the quicker stored CHO is depleted. Which leads to nutrition.

Eating during training effectively tops up the glycogen available in the body. As you should expect there’s a limit to the rate we can absorb CHO though 1.2g CHO/min is a typical maximal figure. Consume CHO at a greater rate and the excess will sit in the gut whilst it’s digested.

You start a race with a store of glycogen and immediately begin to deplete it. Eating during the event allows some restoration of glycogen levels, but is limited by absorption rate. Overall levels of CHO fuelling the body will vary according to initial levels, food consumed and the intensity and duration of activity.

To race optimally you need to start with high levels of available glycogen. Intensity should be controlled to ensure you’re not getting through reserves too rapidly. Once it’s an option a fuelling strategy is needed to get yourself close to maximal CHO absorption. If this is achieved the limiter on performance won’t be nutrition.

Based upon this fuelling strategy we come to the figure of 2.5g CHO/min. With full glycogen reserves and optimal CHO intake if you work at an intensity requiring less than 2.5g CHO/min you’ll reach the marathon with sufficient reserves to keep going. You’ll need to fuel on the marathon too of course, but you will be in much less danger of hitting a low.

The standard quoted limit for CHO absorption is 1.2g/min as mentioned, but Greg went on to allude to the potential to absorb more. Apparently as yet unpublished research suggests it’s possible to hit 1.9g CHO/min with the correct fuel strategy. Believe me I’d tell you what that was if I knew it myself! In terms of using the figure of 2.5g CHO/min you want to be absorbing more than 1.2g CHO/min if possible.

Interestingly this relates to an interview with Asker Jeukendrup I recently listened to on Competitor Radio. Definitely worth a listen if you’re interested in race nutrition. He alludes to a mix of CHO sources in your fuel enabling greater uptake. An optimised mix of glucose and fructose is the way to maximise fuel intake. There are already products out there doing this so whether that’s the strategy Greg referred to I don’t know!

From the data and Greg’s input I could potentially ride up to 255W and fuel myself successfully for an entire Ironman. Playing it safer we felt that 245W was probably a more reasonably target. With the correct fuelling strategy I should be able to hold that wattage and effectively run afterwards.

Fuel isn’t the only limiter though, there’s potentially other physiological factors that come into play. We don’t fail at a given intensity of work only when we’re low on fuel. Most recommendations for racing Ironman suggestion not going harder than 75% of your threshold power (FTP). That’s the top end of performance to race at and beyond that the risk of impairing your run increases

My FTP currently sits around 300W which gives me a 75% point of 225W. I rode Ironman Western Australia and New Zealand averaging about that last year (normalised was higher in NZ). I’m clearly approaching the physiologically sensible intensity to ride, but have a way to my fuel limit. There is room for improvement!

If my goal is riding at 245W for an Ironman next year doing so knowing I’m not limited by CHO I can work back to consider the FTP needed. For 245W to be a 75% effort FTP will need to be around 330W, but the higher the better. Racing at 75% has worked for me, but relies on my strength in running.

It’s not a performance predictor, but rather a metric for progress towards my racing goals next year. I have the metabolism to support a harder Ironman bike, but need to work to develop power further. It’s not surprising, but putting numbers to it acts as a strong motivator.

Reiterating a point from my previous post training to enhance endurance and fat burning will yield minimal returns for me. The area where the biggest gains can be made is in my threshold. Raising this will take me closer to riding at that 2.5g CHO/min point. The aim is to remove the limiters that prevent me riding an Ironman at over 240W. What I know is that fuelling doesn’t have to be one.

Where I’ve relied on long hours of riding in the past I’ll look to reduce volume and focus more on intensive sessions. Being a coach I have the flexibility and time to train more than most so training load will remain high. Six hour rides will be rarer and when they occur the focus will be structuring them. They’ll be a couple of sessions working on threshold and then one or two at tempo or sweet spot.

Throughout this process I’ll be routinely testing fuelling strategies and race day pacing. When Austria comes around next year I will know the pace I can ride and how much I need to eat to do it!

Finally big thanks to Andy Bruce and the Polar Challenge team for introducing me to Peter Byworth and Metabolic Solutions for the testing work. Also thanks to Greg May for his input so far, hopefully he won’t mind further questions!