A week ago I received a Swimsense watch from FINIS, a starting point for analysing my swimming. Consistent weeks of training and technique work have given me some success before, but I’ve never measured what happens in the pool. I could see the potential in the Swimsense after reading this incredibly detailed review; at the least it offered a better solution to my swim Training Stress Score (TSS) dilemma. After two sessions with the watch I’m excited by the possibilities.

The Swimsense is easy to use, set the pool length and it’s ready to go. It recognises all four strokes, counts the stroke rate and times every length; hit pause at the end of an interval and it logs the rest period too. Back at your computer the data can be imported through a USB cradle, but frustratingly has to be uploaded to the Swimsense website for access. Once there it can be shared with a Train Peaks account to get swim TSS and downloaded as a spreadsheet to perform your own analysis. Without an internet connection you have no access, an import straight to a spreadsheet would be useful.

I previously wrote about estimating swim TSS and the difficulties associated with this. Despite plans I never managed to record sessions accurately enough to estimate sTSS well. The Swimsense produces a precise log of every workout and through its integration with Training Peaks swim TSS can be calculated. You’ll need to know your threshold swim pace or Critical Swim Speed (CSS) as Training Peaks uses it to calculate the intensity of a session and from that TSS. Once I’ve collected a couple of months of data I’ll finally have a working Performance Management Chart (PMC) for swimming.

The Swimsense recorded my attempt to draft Paul Newsome during last week’s Swim Smooth Coaching Course. It was an ugly swim that started poorly and rapidly went downhill. I would love to blame a couple of busy days studying or the rarity of swimming in a 50m pool, but have to accept my swim fitness is far from where it needs to be. The data doesn’t lie; it’s clear from pace, stroke rate and stroke count that I am not swimming my best. It demonstrates the depth of information and the detailed level of analysis that becomes possible. 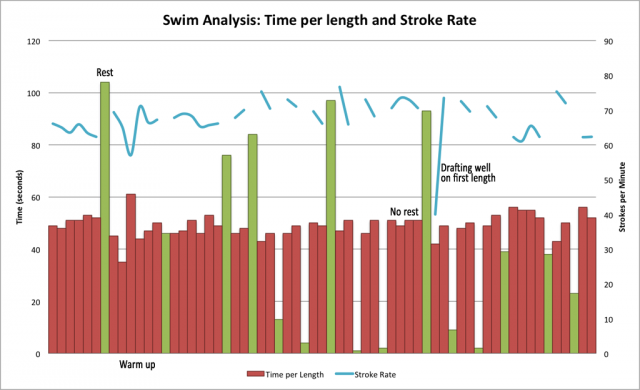 Initially I settled on the idea of testing the Swimsense through a series of steady 300m intervals; nothing challenging, but a chance to collect more data. I’d have stuck with this boring session if Paul hadn’t invited me to draft his threshold set. Theoretically it was a chance to swim faster and the data could be useful. I was lucky if I could maintain the draft for the first length, each rep I would hang on for fifty then struggle home after the turn. Perceived exertion was through the roof even though pace was disappointing.

The swim may have been below par, but the data is interesting. Unsurprisingly once the draft was gone I slowed, pace and stroke rate drop off in the second length. The arm turn over in the first fifty was too high and technique disintegrated giving shocking distance per stroke. I was trying to focus on technique, but this was overridden by a desperation to hang on! Without a draft my pace and stroke rate settled around the same level with a consistently disappointing stroke length. 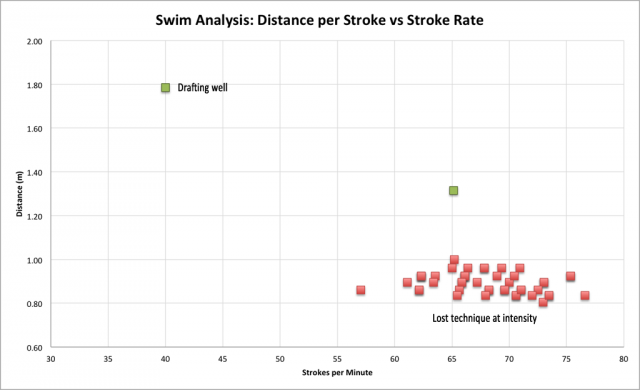 Swim Smooth emphasise the need to balance stroke rate and length. There was no balance on Friday! A ramp test performed two years back suggested my longest strokes were at sixty per minute and my highest pace around seventy per minute. I repeatedly exceeded that rate, it’s no surprise my technique deteriorated. It’s worth revisiting the test, something I can do with the Swimsense and a Wetronome; the watch can easily record the whole thing.

Every swim session can now be precisely tracked and analysed. I’ll no longer return from the pool with only a vague idea of pace or quality of my stroke. I’ll know exactly how I swam every set, where performance dropped and potentially where I should focus training. I can fine tune the balance between stroke rate and length, making regular adjustments to maximise pace. As a swim PMC develops I may be able to relate training performance to fatigue and fitness; perhaps increasing fatigue may lead to deteriorating swim quality. There’s a lot of potential to explore here.

Should the analysis prove superfluous there’s always the motivation of chasing numbers. I don’t want to swim badly when every detail is on record.