I’m late to the game. The race was barely over and power files for a number of pros and a handful of age groupers were already available on TrainingPeaks with analysis following. Not that Mike was slow in getting the data to me – 24 hours after a superb race he’d uploaded the file into TrainingPeaks for me to analyse and comment on his performance. I did, briefly, in email. Extracting Kona results and splits delayed me from publishing my analysis here, but I thought after three days a break from those results would be good and it’s time to focus on the details of an individual performance.

Mike qualified for Kona on his first attempt, a 9:30 in Austria on a hot, slow day was enough to secure him a slot, ticking off a long term goal far sooner than expected. Having gained that slot he was determined to make good use of it and arrive in Hawaii ready to perform at his best. As with most age groupers it wasn’t simple – a new job, an impending wedding and a lack of time to acclimatise to the island’s heat being the critical issues. But Mike was focussed, he’d shown the determination and consistency required to prepare well for Austria and he’d coped with the heat there. You work within the parameters available. I set Mike a tough schedule, pushing him harder than before with the aim being he would reach his taper in real need of recovery. It worked and two weeks out he had done as much as he could, just in time to recover over his wedding weekend and then board a plane to Hawaii.

The swim was never going to be the easiest part of the race. Mike is a runner and while not bad in the pool he struggles far more with open water, particularly when the conditions are rough. Unfortunately Kona tends to be rough. So a 1:11 was a respectable result, not what we might have hoped for, but far from a disaster. When I saw the time on the athlete tracker I wasn’t surprised, mostly I hoped to see Mike raise his game over the next two stages – a solid ride to deliver him to his strength, the run. 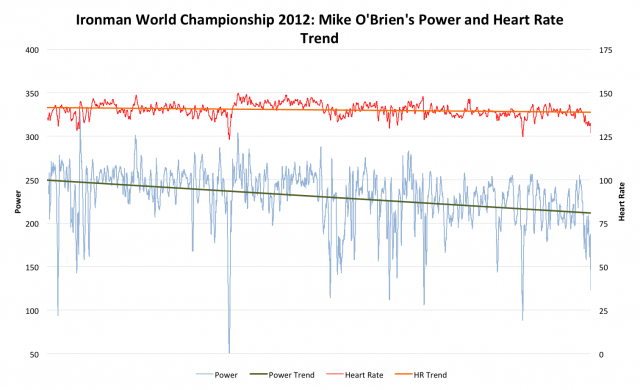 Arriving on the island he had experienced the impact of heat and jet lag, seeing high heart rates for mundane power output. It’s inevitable, the real question is how to work with this on race day. We agreed to stick to the power targets, keeping an eye on heart rate, but overall let feel dictate how he attacked the race. As the chart above shows heart rate remained stable and at a typical Ironman level for Mike, although it’s also clear he could not sustain the initial power and over the course of the race his output falls. I would say he was pushing slightly too hard in the first hour, but it’s a difficult and crowded period of the race for a 1:10 swimmer. As can be seen below. 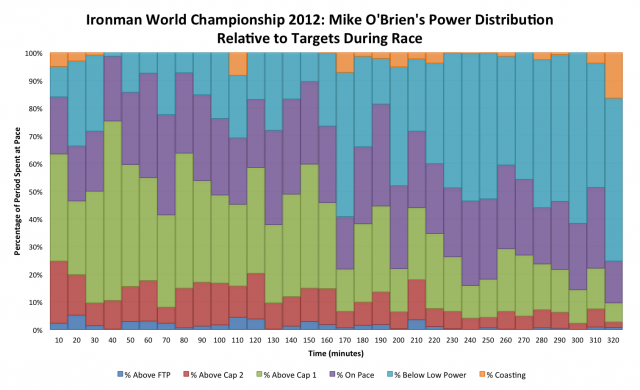 The first two hours are perhaps a little too dominated by time above the main power cap. The summary table towards the end of this post shows Mike is actually riding very consistently, low VI, but with an IF in the 0.75-0.80 region, at the harder end of the Ironman spectrum. After three hours we see a shift down to a lower level of power, roughly corresponding to the return from Hawi. As a strong runner there is the potential to bike harder, knowing he can run well off the back of it, we saw a similar strategy from the analysis of Roger Canham’s Ironman UK data. The heat and humidity in Kona will have made this approach more challenging to execute and in retrospect I think Mike could have saved a little earlier in the bike to potentially output more later. 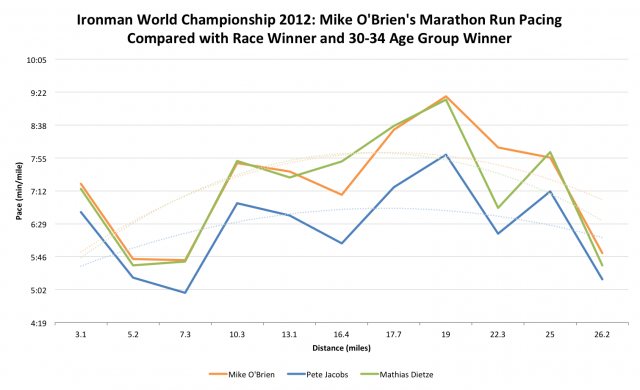 The real measure of a successful bike is the run that follows and in this regard any critique of Mike’s ride should bear in mind he ran well. A 3:13 marathon allowing for four portaloo stops on the second half of the run is a decent effort. The chart above compares Mike’s pacing with that of Pete Jacobs, the race winner, and Mathias Dietze, the 30-34 age group winner. Worth noting, as has been observed from yesterday’s graphs of the professional fields race performance, that timing mats are clearly not at the distances stated and I’ve added a best fit line to give a smoothed representation of their race trajectory. Mike described himself as running on empty for the final 10km and it shows, his pacing drops until he’s within a mile of the finish. But it doesn’t drop that much, he had the run fitness to deliver a solid performance and cross the line in 9:47. 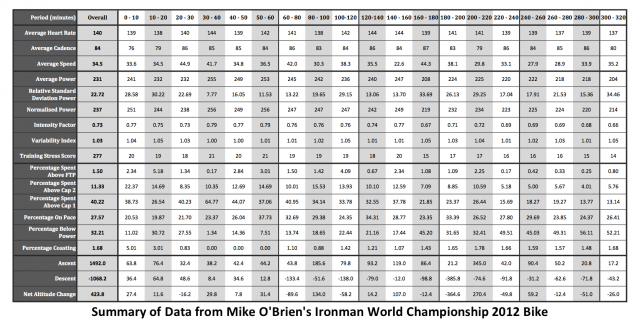 There are tweaks that could be made, he could have been better acclimatised, but overall Mike did himself proud. Fifteen months working together we go from first Ironman to a sub-10 hour Kona, a race he can be satisfied with. It helped that he was already a strong runner before building into Ironman, but mostly it came down to the work he put in over the last 6-8 months. As he put it, “Not sure how I got through the season. All I tried to keep doing was tick off the sessions. I missed a couple but very few.” Basically a consistent plan, lots of work and a level-headed approach to racing.