At some point swimming ten kilometres seemed a good idea. Sufficiently good for me to enter yesterday’s Eton 10K Open Water Swim. I hoped fear would be enough motivation to get me back in the pool. I wasn’t afraid; as an unusual birthday celebration I’d swum seven kilometres in the Tri2O Lake two year’s ago, I could manage three more. Boredom was a bigger concern, if anything would motivate me to train it was the thought of finishing earlier. My distinct lack of enthusiasm remained till race day.

I didn’t need an alarm on race morning – a painful calf cramp woke me before my watch went off. An inauspicious start, I’d memories of Ironman UK where I cramped in the swim, at least I wouldn’t have to bike after this. Cramps are rare and not a good sign; it might be an electrolyte issue, but more often it’s a strong indicator of heavy fatigue. Since returning from Lanza I’d not been one hundred percent. I hadn’t raced, but my body was trashed – perceived exertion was high while heart rate was low, I was retaining water and felt lethargic.

No excuses, I wasn’t backing down. I found some High5 Zero electrolyte tablets in my box of sports nutrition and downed them hoping they would alleviate further problems. Otherwise a regular breakfast, plenty of coffee and a final check of the race bag. I prepared my pre-race nutrition as recommended by Gordo Byrn – 600 calories in fluid form – three sachets of High5 2:1 Energy drink concentrated in a bottle. I was winging it: no race plan and I’d only considered fuelling the previous evening. I’d not even tried the High5 drink before. I put thoughts about stomach issues to the back of my mind, doesn’t fructose disagree with some people? 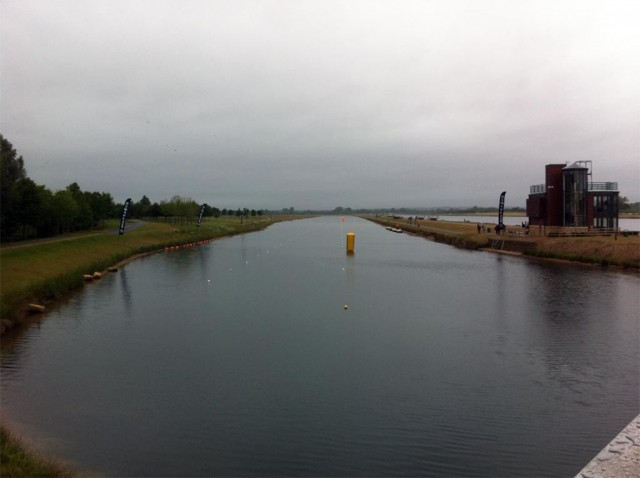 For once it didn’t matter that the weather was miserable, I’d be wet anyway and when I left the water the race was done. Sheltering under bushes I pulled on my race wetsuit and liberally applied vaseline to the neckline, three hours of chaffing was a painful prospect. With twenty minutes I put Gordo’s advice into practice – I downed the energy drink. It was hard going, I felt bloated and understood why it stopping him going out hard. In theory I’d consumed the fluids and fuel to swim 10K without a stop.

Despite contrary advice to Ironman athletes I was unwilling to place myself too far forward on the start line. This was a long training session and surely only strong swimmers would enter a 10K. When the horn went I hit upon a familiar problem: lots of slower athletes ahead. I’d anticipated a civilised swimmer’s start, but there was all the rough of a typical triathlon. Passing people more frequently than expected, but certain I wasn’t pushing the pace; everything was focussed on a comfortable stroke I could maintain for the next few hours.

My lack of racing showed, I was uncomfortable surrounded by others and with the constant contact that entailed. Part nerves, part frustration, I wanted clear water. The first lap never offered it, with swimmers around me I made frustrating progress. Using an old pair of goggles wasn’t helping; comfortable, but worn, my visibility was limited to a few meters. I’d only a vague idea where I was in the lake and who was nearby. Zig-zagging between swimmers I rarely held a straight line throughout the first five kilometres.

Cramp hit my right calf about a kilometre down the opening straight. I was calm, relaxing the leg and letting it slowly release. It passed as quickly as it arrived. The second came in my left calf no more than five hundred metres on. For two laps a pattern of alternating calf cramps plagued me. Each time: stay calm, relax the leg and let it pass. I cautiously scrunched my toes and flexed my legs hoping it would delay further onset. By the last lap they’d vanished, I suspected my legs were too tired to cramp anymore.

Two loops of crowds, meanderings and cramps; I entered the final lap feeling strong and with the clear water I wanted. Race nutrition was working – I’d not had to stop and still had more in me. I found the buoy line, a rope ran along the bottom that eliminated sighting issues, I picked up the pace. Technique and timing clicked; it felt good – I was working well. This far into the race I couldn’t say whether it translated to speed or holding on to what I had. Relative to the field I was moving, I passed swimmers picking a few up on my feet as I went.

Everything went into the closing four hundred metres. Once again my goggles let me down as I arced wide into the finish line. I wasn’t fast out of the water – nervous of cramping when I stood, I paused before steadily jogging to the timing mat. Job done.

For all my doubts I thoroughly enjoyed the race. I regret not prioritising it more, but lessons have been learnt. I can pace better, put more in early on and stay focussed; I can wear better goggles and actually see where I’m going; I can practice my drafting and relax more in contact with other. Next time – there will be a next time – I can actually race and perhaps improve on my time of 3:00:31.

The hunt is on for more long open water swims (that allow wetsuits). Swimming long is fun.