When I run there is lightness to my step and fluidity in my movement. Confidence is returning and with it the subconscious fear that something – that previous injury – might go wrong diminishes. I’ve been running without calf pain for months and a winter free of interruptions has allowed me to slowly regain some fitness. Spring brings hope. I’ve written about putting the previous season behind me and it finally feels like I can. There is the potential to return to form.

Drawn to comparisons of this year with the last I started to ponder these questions and the direction I am about to take. I previously concluded that last year went wrong because, “there was no plan.” True to a point, but it overlooked the huge role my own motivation had played in the affair; I made choices: not to swim, not to run far, to rest because I’m tired, to cycle a little bit more, to continue racing when unprepared. In the absence of a detailed plan I made successful progress on the bike, it was the absence of consistent training that hindered development. If I honestly evaluate the last four years – I’ve never stuck to a structured plan, but at my best I have been consistent. 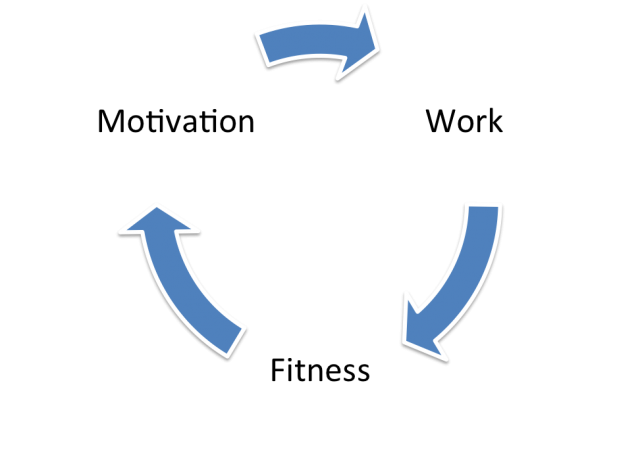 How I train is intimately linked to how I feel. I struggle in the off season when fitness is low, motivation flounders and my peaks seem like distant memories, but I flourish in season, once spring is done and fitness has grown, training comes naturally and I have an innate desire again; then, sometimes, I push myself too far and for a while I struggle once more. Motivation drives work, work drives fitness, fitness in turn drives motivation. When one component is low the others follow – early season my lack of fitness makes it hard to do the work and I am poorly motivated, at my peak I’m fit and motivated enough to work too hard. I’ve felt the link most strongly when I go too far, fatigue and motivation tightly bound prevent me from working and fitness falls. Mood is a good indicator of form.

I train informally, driven by a desire to work and be fit and an enjoyment of sharing the experience with others, but it’s not unbounded. I realise that while I’ve lacked the strictness of a schedule, I’ve developed rules:

* Good and bad are subjective terms, good can hurt; it’s about being willing to push yourself.

I don’t want a firm plan. I may think I need one, but it would detract from the pleasure of training. I’ve had success constructing week after week to this formula, progressively working harder as my fitness grew; perhaps I was limiting myself, slowing my progress, but I’m fine with that – it’s never been just about race results. I train for enjoyment.

The season ahead? I’ll build it with my rules, starting next week with another home training camp – six days of big mileage, maybe this time I will kick-start the season. There’s plenty of racing, I’m looking forward to it; I’m not setting myself targets, simply aiming to race as well as I can. I’d like to go faster, but not at any cost. I’ve spent a lot of time focussed on improving, this year I just want to enjoy it. It’s sunny outside, time for another run.