Lessons from the Home Training Camp

In March I set out my intentions to hold a home training camp in an article for Endurance Corner. A week at home, focussed on training with the training load of a camp environment. Well motivated there was no reason I couldn’t train as effectively without the cost and hassle of travel. That was the theory at least, things didn’t go perfectly to plan. But I’m fitter for the week and I’ve learnt from the experience.

For Brits the next week is prime training time – Easter is a four day break and the royal wedding repeats that the following weekend. You can take three days of holiday and have an eleven day break. Perfect for some solid training. A few of the athletes I coach are taking this route and I’ll be joining them for some quality riding during the week.

Training camps offer two major benefits: the removal of distractions and the presence of other motivated athletes. At home I was at the heart of my usual routine; my big mistake was not clearing all my work before the week began. The beginning and end of the month are my busiest periods – I’d scheduled the camp to coincide with this. Better organisation would have helped, but work aside all my regular distractions were present. Planning to ignore distractions is easy, actually ignoring them is hard.

I had motivated company from an athlete I coach, as the week progressed it proved vital. By day six both of us would have happily bailed on the ride if the other hadn’t been there. At high volumes fatigue reaches a point where you rely on each other to keep you committed. Being the stronger rider I dictated pace, a new experience, most camps I’ve been on I’ve been chasing. Richie ensured I got out the door, but I had to keep focussed to get the work done.

Injury is always an issue with large increases in volume or intensity. Both of us came into the week with niggles and abandoned plans for regular runs early in the week. Cycling was the priority and the risk of harm from overuse wasn’t worth the benefits of pushing running too. We weren’t going short on training.

Swimming was unaffected by injury, but I still failed to make it to a pool. Limited facilities and inconvenient opening times made the logistics difficult, but tired from cycling I lacked the motivation. As the week progressed Richie dropped the swim to focus on the bike work; swimming alone fatigue got the better of his motivation too. It clearly highlighted the difference in fitness and commitment required to get through Epic Camp to my effort here.

The initial plan structured the week into two blocks of three days with an easy day between, but to avoid a long ride in wet weather we bumped the easy day forward. The downside was three long rides to finish the week. The first two were fine – we were tired, but able to ride well. By Sunday only the fact it was the last day of camp got us through. There was a notable drop in performance, once again fatigue sapped motivation to work harder.

Intensity was controlled throughout; most of the week was at a steady endurance pace. This was a volume orientated camp, not intensity, the easiest mistake would be to go in too hard. Following the recovery day my legs came back and day four’s ride contained a large block of intensity in the latter half. I definitely felt this over the remaining days; the three-one-three structure would have been a better approach. 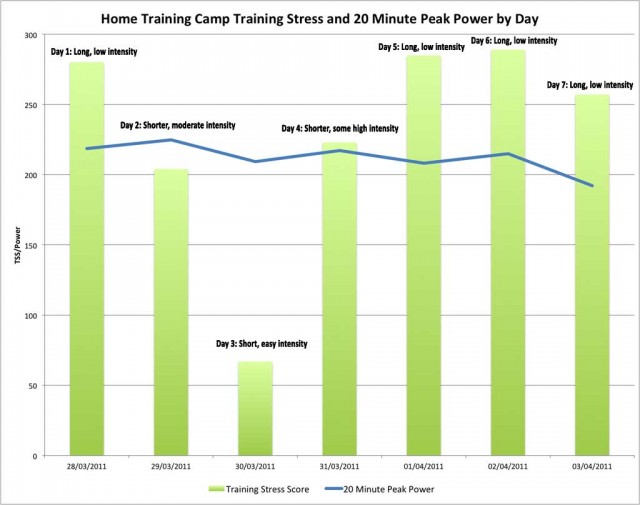 Thirty-four hours of riding and a Training Stress Score (TSS) of 1700 – it was a big week. Fitness soared and with it fatigue. My Training Stress Balance (TSB) dropped to -100 unseen since last year. The following week had to be easy, sessions were unstructured and power output was down; I cruised. Training didn’t stop, but the emphasis was recovery. Having solely focussed on cycling I rapidly bounced back, by the end of the week was feeling strong. It was a further week before my performance in training actually matched that sense of fitness.

Success isn’t measured by the hours you train it’s the results that follow. After a fortnight they are looking good – key sessions see new peak power records. It’s impossible to separate the impact of one week from the last few months of accumulated work, but there has been a notable upshift in power output. I certainly feel a stronger cyclist and in fantastic shape.

The week wasn’t a perfect success. The absence of running and swimming detracted from my original intention. Injury was a sensible reason to back off running, but logistics were not a good excuse for avoiding swimming. I’ve responded well to high volume training weeks in the past and signs are it’s working again. The home training camp was a success.