A Look at Four Years of Ironman Bike Training

Power, heart rate, cadence, speed, altitude – every second of every bike ride is recorded and logged. Analysis of cycling data is a staple of this site, so having condensed four years of run data into a single chart I inevitably turned my attention to the bike. Over the last few years the Performance Management Chart (PMC) has become an important part of how I track and manage my cycle training, at times becoming part of the planning process. Already familiar with the trends, comparing my fitness over four years felt more like an exercise in nostalgia. 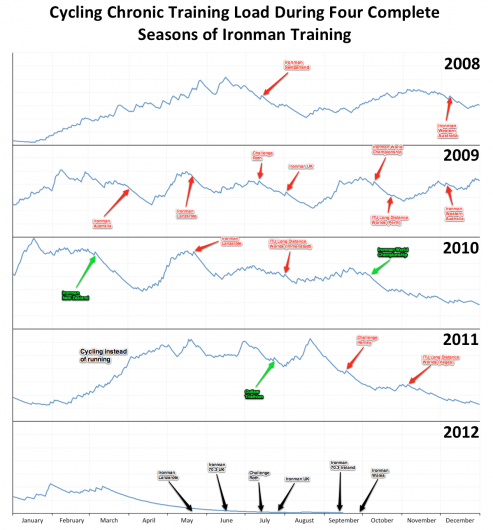 Once again the blue line represent Chronic Training Load (CTL), or fitness; races are marked in red or green subjectively indicating whether I considered the bike successful or not. I should emphasise the subjectivity of those ratings, reviewing the chart now, a few days after I produced it, I realise that I may have been overly critical of both 2008 and 2009, particularly the latter half of 2009. Were all those races poor performances on the bike? Perhaps. My recollection, the nostalgic view, is that early 2010 was the turning point in my cycling, since then I’ve ridden well in three races. Also there is a distinction between being happy with the bike and being happy with the race – I struggled on the bike in Immenstadt, but ran superbly, a great day overall.

The background history is probably familiar by now (see the About Russell page if not). For half of 2008 work limited time for cycling, I manage a smooth and gradual rise in CTL through weekend long rides and evenings of hard turbo sessions. It culminated in June with my first Epic Camp; fatigue from this camp lingered and despite such a progressive, long build my performance failed to hit the mark. September onwards I was training full-time, living in Australia, it’s surprising to see how slowly I raised fitness; while I remember this period as bike focused, running was progressing faster. It’s a reality check as to how easy I was riding – long hours of training, but the intensity was often far too low, I stressed the body through duration.

A scattergun approach to Kona qualification worked in 2009 – I raced a lot and eventually qualified. However, despite some good races I never felt I rode my best that year, something was always missing. Early season was sabotaged by moving during my Ironman Australia taper and worse, a saddle sore, for Ironman Lanzarote. With nothing to show for six dedicated months I refocussed and turned things round. Training through Roth and into Ironman UK, I had two good races in a short space of time, and perhaps I am overly critical of my bike performances there; while I may not have performed exceptionally on the bike, even my first trip to Kona went well. Races in this period are more amber than red, not quite what I’d been hoping for, but far from write offs. 2009 was an important year for my cycling, the increased time and energy I’d focussed there was slowly paying off. Fitness had improved, but I still tended to ride too easily, excessively reliant on volume.

Volume continued to dominate early 2010, January’s length of New Zealand Epic Camp put over 2000km in my legs by the end of the month. The timing was perfect, another month of more focussed riding and I was happy with the resulting performance in Ironman New Zealand. A mixed year followed, but one that introduced changes to my training regime – a month in Lanzarote showed me how hard I could work during long rides and the months without running showed me the gains to be made with greater variety of cycling. There was a shift towards slightly shorter, more intensive rides – less overall stress per ride, but far more effective in combination.

I did little else, but cycle by these principles in 2011. Yet I only managed a single performance that pleased me. Self-sabotage. I did too much, my end of season fizzled as I peaked too soon, burning myself out in the Alps. Spent from seven months of hard work, training dwindle and race results dropped.

Which leads to today as I slowly pick myself back up and begin the build into a busy season. So was there anything to be gained from revisiting the past?

Despite my familiarity the process hasn’t been without merit; I’ve noticed shared themes between bike and run – the merits of simple, consistent training at a solid level of fitness, and how the highest peaks with great potential to bring me on are often the most destructive. More so, a lesson I can take back to my run training, the broadening of training sessions and increased intensity yielded good results without necessitating increases in my load. A reminder that it’s not just how much you stress the body, but how you stress it that matters.

I no longer have the luxury of unlimited training hours and I don’t need them. The changes I’ve seen over the last four years show me how much can be achieved with a varied, balanced plan; volume is needed in blocks, but it shouldn’t dominate the entire year. Occupying the middle ground can deliver the majority of fitness and performance gains I need.