The alarm goes off at seven and I wait to see if either of us will commit to a sea swim; odds are I won’t, but if Gill moves, then the day starts with a swim. After that breakfast, identical to the day before – some meat, some eggs, a little bread, a couple of bowls of coffee and maybe – almost certainly – a piece of cake. A momentary pause to allow it to partially digest before changing into bike kit and heading out for a ride. A few hours later we’re back, a quick snack from the fridge and then relax, anything that involves sitting down. Just before dinner, a run along the seafront tracing the path of the Ironman. Then ease down – eat, an early evening stroll dodging the touts hoping to lure us into their bars and finally back to the room with enough time for a couple of episodes of Battlestar Galactica before bed. This is the pattern of life on Lanzarote.

A good pattern is often the basis of successful training, a routine that works – that leads to progression in fitness and performance. While these routines share common ground, they equally possess subtle differences, unique patterns tailored to our individual needs. I have examined my routines in many different ways – charts and analyses that attempt to model the impact of my training, abstracting swim, bike and run to numbers. I know that for many unfamiliar with the system and tools I use it can be confusing and doesn’t give a strong sense of what I am doing; the pattern of training isn’t clear. So I’ve tried a different approach, considering only one variable, duration, and focusing on it’s pattern over time. We’re revisiting four years of Ironman training data, but this time in a much simpler way 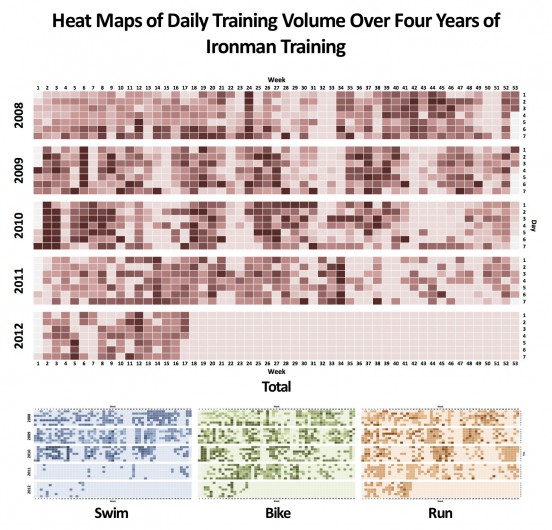 All you need to understand is the following: in the charts above each square represents a single day and the darker the square the more training I did on that day. You can pick any square and immediately see how it stands in comparison with any other: 2009, week 35, day 4 was a moderate training day, consisting of (you’ll need to open the full-size image to pick out details) a swim, bike and run. It’s at the larger scale I find the heat maps more interesting – you can clearly see distinct blocks of training, patterns of volume relating to my focus at the time.

The pattern of a working athlete in early 2008, low volume in the week paired with busy weekends. Then dense, dark periods preceding big races, followed by pale patches of recovery as I solely train through 2009 and into 2010. A shift in 2011, less darkness, but frequency, many more moderates volume days, consistent over a longer period of time (excuse the swim record, it’s inaccurate, I honestly did swim more than that). Leading to an uncertain 2012, slowly finding its feet along similar lines to the year before.

In the hunt for a ‘good’ pattern, what do I find? Unsurprisingly those periods where I densely train – where few light squares appear – are the most productive. The big days – those dark squares – can be beneficial, but too many tend to break up those dense blocks of training; a scattering seems to work well. A different, pictorial, approach leads to much the same conclusion as more complex routes. Train regularly, sometimes train long, beware of doing too much.