It’s hard, with the frequent retellings, not to embellish the story of my first DNF. Less than twenty miles to go, I’m feeling good, better than I’d expected. I hit a short rise, one of many at Wimbleball, I ease the gearing, spin a little, until the crest. Out of the saddle, shift into the big ring. The sound of a firm response. Lock up. A skid. Instinctively I brake; my foot is unclipped and down. I look back and there, firmly wedged among the spokes is my rear derailleur the remains of its hanger still attached. Race Over. 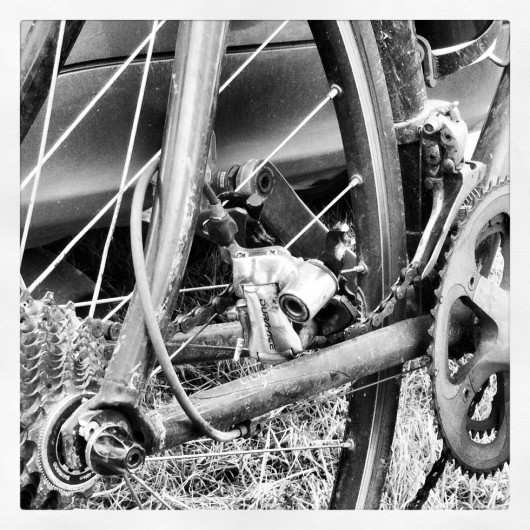 Between the hours of one and four that morning I alternated between brief, unsatisfactory sleep and periods pondering why I was racing. I couldn’t find a satisfactory answer. I was convinced I was lining myself up for a repeat of Lanzarote; it was time to throw in the towel. Breakfast was subdued, I struggled through some scrambled egg and a bagel with little appetite, nerves dominated. They remained – on the drive to the race site, in yet another queue to park, as I set up my bike. It was only when they announced a delay to the start that I found myself relaxing. Somehow the tension was broken and with it my confidence rose; at the very least I’d try.

Eventually we were escorted to the lake edge. One thousand athletes filed into the cold, murky water and floated waiting for the start. More delays. A slow trickle of late comers fill in at the back until – eventually – the national anthem is played and suddenly we’re off. I’d carefully chosen my position for a clear swim – it worked. I swam unimpeded through to the first turn buoy, clear water the entire way; I was moving well and the buoy arrived surprisingly soon, this would be a good race. My mood lifted and thoughts of abandoning the race were forgotten.

Subsequent buoys proved to be farther apart than expected. I reevaluated my swim, downgrading from good to okay. I would take okay. I was also starting to see the merit in 70.3, this was a much more manageable day than Ironman. I exited the water and dashed up the steep, muddy bank to transition eager to get on the bike, but with the emphasis firmly on successful completion I took my time in transition, layering up in case the improved weather failed to hold. Out of T1 the narrow mount line was crowded with triathletes haphazardly mounting their bikes, I weaved through the nervous mounts and twitchy handling careful to stay upright.

Then, once the crowds thinned I tested my legs. They worked. None of the emptiness of Lanzarote, my heart rate responded, the power rose – I could ride. I eased my way into the race, pushing hills, rolling through the flats, getting the feel for riding strongly. It was clear I wasn’t at my best, but the power numbers were pleasing – I was happy. The doubts that plagued my sleep were gone, I was enjoying the race. And so it continued until that short rise eight miles into lap two.

There have been times, at my lowest points in races, when I’ve wished a mechanical would take me out of the race, in fact had this happened a month ago in Lanzarote I don’t think I’d have complained, but today it was the last thing I wanted to happen.

My race was over – twenty miles was too far to walk it in. I picked up my bike and turned back taking a side road towards Wimbleball. Four miles, bike on my shoulder and shoes in my hand, at least it wasn’t raining. I was frustrated at my first DNF. I was frustrated at failing the Ultimate Endurance Challenge at the first hurdle. I was frustrated that is had been out of my control – I had no say in this.

Back at the finish line I watched others collect their medal with a hint of disappointment. The first time I’d not earned one. But it wasn’t all gloom, four hours and forty-five minutes after race start the first of my athletes crossed the line in fourteenth place with a strong 1:22 half-marathon. At least something was working.