☰
Home > Off to Iron Camp

Off to Iron Camp

Packed. The busiest moments in life seem to aggregate around travel, as I prepare myself for ten days in the Pyrenees my to-do list has grown exponentially: complete July training plans (halfway there), study the half dozen race reports that arrived this week, pick apart the power data from an athlete’s weekend ride, update the blog (possibly not so important), and of course pack. Despite good intentions I leave with a handful of tasks incomplete, laptop in hand and an optimistic plan to be productive during a training camp. I should know better. 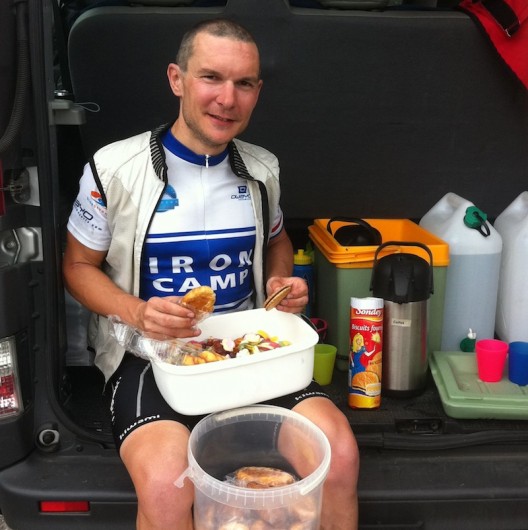 The Pyrenees has been my preferred training venue since starting long distance triathlon, Pyrenees Multisport has been the base of many a successful camp. From spectacular crashes on the Tourmalet, ice and snow over Easter, the perfect build for Kona in 2009, to tackling the mountains in good form on last year’s Iron Camp – lots of good memories. I should also mention meeting Gill there, because, if I don’t, I can imagine it’s the sort of thing that will get mentioned. But I want to focus on the training potential – specifically for me – of the Pyrenees, not the dating prospects.

The next ten days are a chance for me to put aside ninety percent of the usual distractions and focus on something I sorely need – training. Wimbleball, or what little there was of it, hinted that there’s some raw materials to work with, but I am lacking in the sort of fitness an Ironman needs. It’s ironic that I once wrote against the notion of a minimalist approach to Ironman training, yet now – one year on – I seem to embody it; this is a topic I will revisit, experience has softened my views, in some respects at least. I may have adopted a more relaxed attitude to my training, but I still recognise that success at long distance takes work. I have ten days of it.

The main focus will be this year’s Iron Camp which I will help lead with Steven Lord. It’s been a while since the pair of us have trained together and this time while I’ve got a lot to do, he’s in top form. I envisage a lot of chasing him up mountains, which if it doesn’t kill me will make me stronger, but could go either way. The camp focuses on volume, though the Pyrenees mean there are few easy miles and like the Epic Camps that inspired it, Iron Camp has a points game to encourage hard riding. I intend to embrace the objectives wholeheartedly and push myself hard, reminiscent of the good-old – often thoughtless – days when I simply trained.

For ten days everything else fits around training. I’ll squeeze in those remaining training plans when I can and update this blog as time allows. I’m sure they’ll be pictures in my twitter stream and on Facebook. But mostly there will be training