I have climbed so many mountains I am beginning to lose track of them all. Since Wednesday I have crossed the Port de Bales and Portillon again; then ridden a number of cols so small only a few bear their names; roasted on the way up the longer than anticipated Col du Spandelles; and with all that in my legs I followed the Pyrenees l’Etape du Tour route – Col d’Aubisque, Soulor, if those weren’t enough the Tourmalet, and then just the Col d’Aspin and Perysourde to finish (us) off. Many kilometres on the road and many metres into the sky. 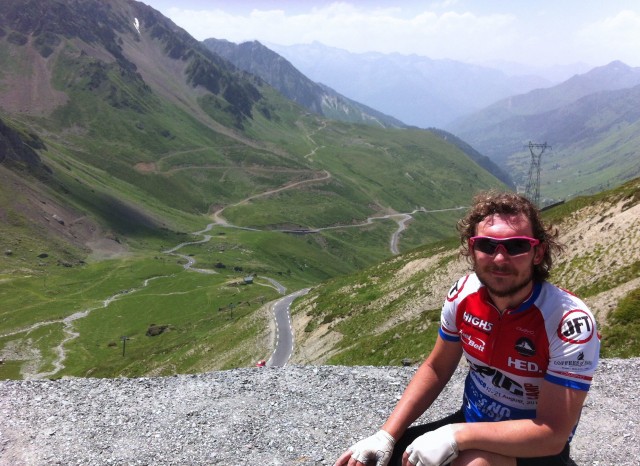 Iron Camp has been tough, tougher – I think – than previous versions; though perhaps my relative low fitness at the start of the week plays a part in that. If you’d asked for my honest opinion on Monday evening, I was a little concerned with how I would manage, nervous after the mini-detonation so early in the week. Yet, each day I grew stronger, something entirely new. Usually I arrive at a training camp already in good shape, then proceed to burn that fitness, pushing myself hard, too hard, until eventually fatigue brings me down. Instead I suffered from day one, but kept going, and slowly improved; my climbing on the ascent such that by day six I could tackle two Hors Categorie climbs with confidence.

There have been moments: yesterday, with the biggest climbs behind me, three kilometres from the top of the Peyresourde I began to wonder if I could make it, the hot hours on the road took their toll and there’s nothing worse than being so close to the summit – in sight even – yet wondering if you have the energy to turn the cranks a few more times. Or before that, ten kilometres up the Spandelles, when I realised there was actually another five to go and the rough road seemed determined to twist and pitch its way up. And when I do get there I’m left with a nasty descent down steep, narrow, gravelly roads that even the good descenders can’t enjoy. But let’s not go into the stomach upsets from the constant intake of foods, fluids and sugars.

It has been hot – a summer, that thing we’ve been missing back in the UK. And I have been British enough to grumble – briefly – while baking in the afternoon sun on the 8% slope of that overly long Spandelles. We have been fortunate on this camp, arm warmers and gilet remained firmly in back pockets when faced with temperatures north of 30 centigrade. I shouldn’t have complained after so many months of cold and rain.

And unfortunately it now comes to an end – on my thirty-sixth birthday – with the Col des Ares Time Trial. Chances of a personal best are minimal after the week that’s gone, but I’ll show some willing, before – more than likely – passing on the option of climbing the Col de Mente. I think I’ve accumulated more than enough stress in the seven days since I arrived, time to start absorbing it. If I can do that in one week I’m ready for a good ride at Roth.