☰
Home > An Evening of Athletics at the London 2012 Paralympics

An Evening of Athletics at the London 2012 Paralympics

It feels like I’m in race recovery. Tired, lethargic, aching legs. Saturday was spent entertaining six year olds: kites, football, three minutes – it felt like three minutes – of dead hangs spinning round in an adventure playground, chase, and a confusing game mixing climbing on tree trunks with pirates. And between all that hastily making travel plans to London so that on Sunday, when peace final descended on the house, we could rush to the station and make the journey from Bristol to the Olympic Stadium to watch an evening of Paralympic athletics. Busy, tiring – we didn’t get home till the early Monday morning – but great fun. 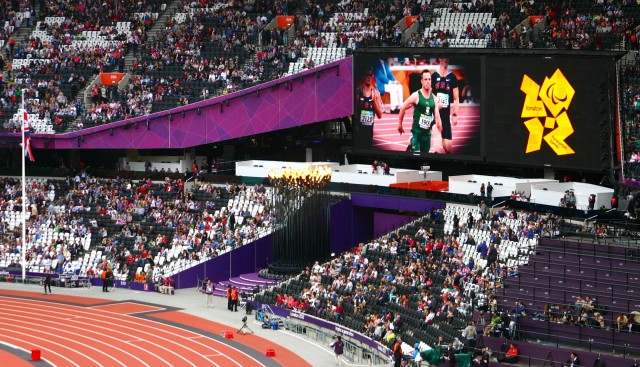 Watching hours of Olympics coverage in August made me regret the decision not to apply for tickets; the atmosphere looked amazing, easily worth the travel hassles and cost that had originally dissuaded me. By the time Gill and I considered the Paralympics so had everyone else – tickets were scarce, we accepted that television was as close as we would get. Then, Friday afternoon, I received an invite from adidas to attend a session at the Paralympics as part of their promotion of the Front Line to Start Line campaign. Too good an opportunity to miss. Debate was short despite the busy weekend: we were going to the Paralympics.

Four hours after we left home we were in the Olympic Park, kitted out with Front Line to Start Line t-shirts, and a little overawed by the size of it. Not that we saw that much of the park – I hadn’t appreciated the scale of the venue until now and the couple of hours we’d allowed were about enough to have some food, look at the merchandise and find our entrance to the Stadium. With more time and more planning we would have happily spent a day exploring the Park. 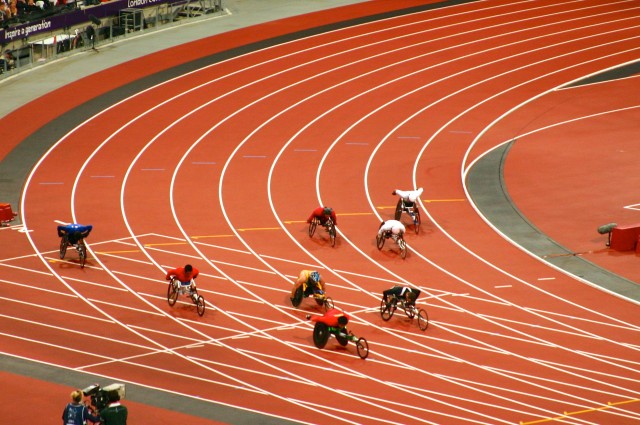 Sat towards the front on the second tier of the Stadium we had a great view of the track with the finish line and podium in front of us. As we waited the Paralympic athletics classification system was helpfully explained: the letter indicates the event, T for Track and F for field; the first number indicates the type of disability, 1 for visual impairment, 3 for cerebral palsy, 4 for amputees and 5 for wheelchair athletes; and the second number roughly indicating the degree of impairment. Simple enough to understand, but highlighting the complexity of trying to deliver a level playing field across a diversity of disabilities. The evening opened with the men’s 400m T12 heats, visually impaired runners with the option to use a guide, on the track. At the same time the men’s Javelin F44 finals, single leg amputees, began in the central field. 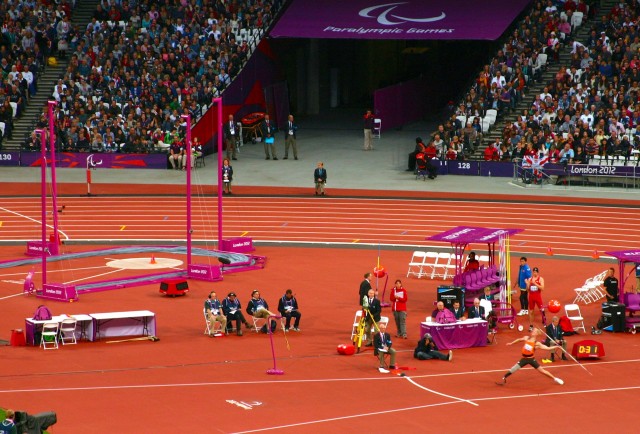 Soon we moved to the women’s 100m T11 finals – visually impaired, blindfolded and with a guide runner – and then the men’s Discus Throw F42 victory ceremony on the podium directly in front of us. Gold for Aled Davis and Great Britain, naturally every British athlete receives huge support from the crowds, but none more so than a gold medallist. The evening continued mixing events and ceremonies – again I hadn’t appreciated how much there would be to watch, I’ll admit this was my first time at a major athletics event. It seems so linear edited for TV, but the reality is while track events are held, so are field and there is always something to watch. Time rushed by. 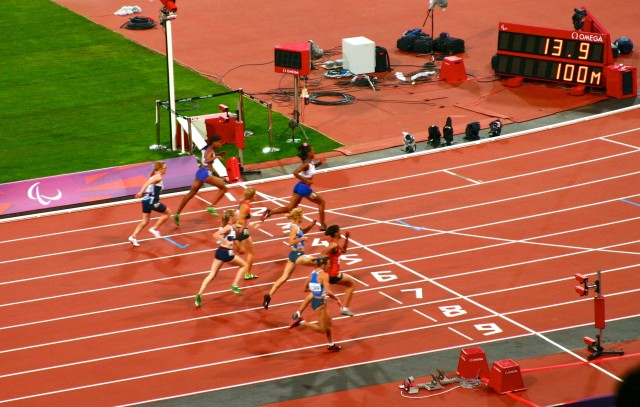 As the evening drew on we built towards the big events of the night: the men’s 200m T44 final featuring Oscar Pistorius and the men’s 5000m T54 final featuring David Weir. At which point, unfortunately, we had to leave. We had a long – and expensive if we missed our train – journey back to Bristol, so we left to the sound of cheers for Pistorius and missed the controversy that followed (excellent summary on this at the Science of Sport blog). Again with more time and a plan we would have stayed the night. Even though we missed the final high points of the evening we’d had an amazing day – it lived up to the hype. Waiting for a train at Stratford Station Gill and I wondered if – perhaps – in four years time we might be able to take a holiday to Rio and repeat the experience.

We were able to attend the Paralympics thanks to adidas and the Front Line to Start Line campaign an initiative between the British Paralympic Association and Help for Heroes to help injured servicemen and women progress in competitive sports. adidas have launched a limited edition t-shirt and baseball cap available until October 3rd in support of this campaign, donating £5 and £2 respectively for each item sold. More information is available here, and you can buy the t-shirts and caps here.