☰
Home > Racing > How Long is Long? On the Length of Ironman

How Long is Long? On the Length of Ironman

Speculation started within minutes of the winner crossing the line, was the run accurate? From my position on a side street in Tenby and with infrequent Internet access via the weak signal to my phone I couldn’t tell. Athletes passed me, and all I could say was how they looked and how many more laps they had to go; the answer: worse the closer they were to finishing. As friends’ times filtered through, fast but not outlandish, it could easily have been a good day for those I knew, but a rush of sub 3 marathons among the age groups suggested that there were grounds for suspicion. It didn’t take long for GPS to confirm.

And so we have another Ironman where discussion of results are often bracketed by discussion of course length, or its lack there of; respectful of placing and time, recognising the difficulty of ten or more hours of racing; but discussion nonetheless. Reports mix pleasure in performance with acknowledgements that times may be influenced by distances. It’s an emotive subject, clinical commentary can feel like criticism, disputing the work involved, to those who experienced the race. It often seems those who raced emphasise the difficulties involved while those who watched are more interested in the technicalities.

For some there is clearly an element of disappointment that it wasn’t quite an Ironman, or frustration that comparisons have been rendered impossible. Not that we’ve ever, really, been able to compare; eliminate variation in courses and we come to conditions. Little time was wasted speculating whether Roth was short this year – it was, both on bike and marginally on run – rather those who raced talked of the strong winds, the slower conditions. It would take more maths to truly normalise the fields and offer fair comparison between year on year of any race, let alone between different races. It is a fact of life for triathlon: course and conditions vary, our perception of difficulty is relevant.

Secretly I am pleased when I roll into transition sooner than expected, the distance on my GPS falling short of 180 kilometres. A faster time without any extra work. The race is the course on the day and the competitors who tow the line. Speculation – my own or others – does not detract from my performance, if I pushed myself and I raced to the best of my ability I can only be satisfied. Of course I have also experienced that frustrating sense that a few more kilometres might have allowed me to run my competition down, but I’ve experienced that regardless of length.

It’s later, when the elation of the finish and the soreness has subsided, that a hint of disappointment develops. Because I know I will have to note the shortfall in my report and I will struggle to make comparisons. And because there will be questions around the results, an open opportunity for meaningless speculation from observers – if I had raced, I might have… Except they didn’t race, so it doesn’t matter. We’ve all done it.

The deeper frustration is that other sports don’t have this: marathons are at least 42.2km and if not it approaches scandal. There are far tighter standards for certified marathons than Ironman’s forgiving tolerances. A runner can be certain personal best times were performed over a minimum distance, an Ironman cannot. I appreciate there are far more logistical difficulties for triathlon, but it feels like the bigger issues is a lack of concern. Do we need the legitimacy of accurately measured courses, or is it enough that, “you are an Ironman”, when you cross the line?

While I firmly believe we race the course on the day and all that matters is we perform to out best, and while I secretly appreciate the benefits of a few missing kilometres, I ultimately wish for greater accuracy so these debates need never happen. Or perhaps honesty, I can compromise, races openly publishing their actual distances would at least end guesstimation within the bounds of GPS accuracy. They can continue to call themselves Ironman as can those who complete them, but at least we’d know.

My first Ironman was short – it was Austria so bound to be – my fastest was possibly correct, but some of the others in similar times certainly weren’t. My best swim is known to be fast, currents mainly; my fastest bike is legitimate, I believe; but my fastest run was certainly short, by a mile. In the interests of full disclosure: I was once penalised for – allegedly – drafting. I have raced in hot, cold, windy and calm conditions with a variety of performances. It is fair to say there will always be caveats, it would be better if there were fewer. 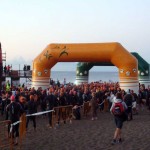