An Example of Successful Planning Using the Performance Management Chart

Earlier in the year I wrote a pair of posts about planning training with predicted Training Stress and using the Performance Management Chart to judge the potential impact. The approach, now implemented within TrainingPeaks, allows athletes to develop plans to deliver the consistent, steady increase in fitness that is desirable through much of a build. At the time I used the principles to outline how I would rebuild my own fitness and, as it happened, highlighted how planning is only as good as its execution. It didn’t leave me much to revisit. Fortunately one of the athletes I work with had more success in adopting the approach and provides a good example of its potential.

There have been significant changes in Nick’s approach over the course of the year. His season ended relatively early at the start of July with a pair of Olympic distance races. After a long period of focussed training Nick was looking to clear the body of a few niggles that had started to hamper some areas of training and to take a break from the monotony of a strict structure that was beginning to take a mental toll. Following a couple of weeks of rest he switched to planning his own program with the aim of enjoying training and slowly building his fitness back. There were no new season goals and plenty of time before he might reach any, this was simply about finding a very sustainable route towards fitness and avoiding injury. With regular feedback and reviews of his Performance Management Chart below, Nick has evenly grown his fitness (CTL, blue line). 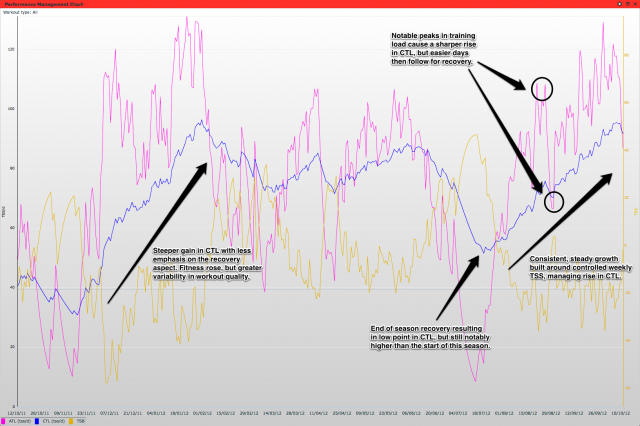 The principles evolved over the first month. Nick tracked his weekly TSS and while not specifically planning to hit a certain target he came to set himself Training Stress caps that would limit the amount of work he could do in a given week. The neat growth in Training Stress Scores (blue bars) is clearly illustrated in the chart below, week on week with a couple of exceptions TSS rises. And those exceptions occurred when Nick felt tired, rather than push himself more from the start of the week, he took a day or two easy before picking training back up and heading towards higher TSS the following week. This isn’t a three weeks build, one week easy program, this is about a gradual progression in training with recovery occurring when it’s specifically required.

You can of course achieve similar without the use of weekly TSS or the PMC, the plans I build my athletes are generally designed to gradually improve fitness and I am not explicitly using a PMC each time. The real risk when self-coaching is that the choice to take an easier day comes too late, I’ve certainly experienced that in previous years, but last year when developing my cycling I came to recognise my own two-day rule, a cycle of build and recovery that delivered results. Nick’s weekly TSS cap helps achieve this end – he never stretches far beyond the work he has done in previous weeks. It’s a patient approach, a more sophisticated version of the ten percent rule that properly recognises workload. Perfect at such an early point in the year, Nick’s fitness has returned quickly without excessive mental or physical strain.

Nick’s current training load is repeatable meaning he can be consistent, he could probably handle more, but he’s satisfied with the progress he’s seeing at this level and doesn’t feel the need to move on. Now when he trains hard and racks up significant TSS he doesn’t keep trying to push that level, instead he recognises an easier day will help him come back and fully repeat the workload. I’ve been impressed by the level of balance he’s achieved.

While he continues to slowly grow weekly TSS I’ve highlighted the need to recognise a limit – there will come a time when he cannot sustain the increase in volume or intensity to continually deliver a higher weekly TSS. At that point maintaining a high and consistent TSS will certainly enable him to improve performance and he can also consider changing focus, allowing TSS and CTL to fall as he shifts the towards more intensity and less volume; over a long season he could have a number of blocks alternating between differing focuses.

So while I singularly failed to provide my own example this year, Nick is delivering a good example of applying the tools of the Performance Management Chart to better manage his progress early in the season. He’s also proving to be an excellent example of the role of patience early in the season, showing how improvements rapidly accumulate from humble beginnings.