This should be an easy blog to write. I can summarise this season with a single, family-friendly word: rubbish; however for the purpose of this post I will use a few more (still family-friendly). 2012 was to be my Ironman comeback – race a lot, return to front-of-pack performances, age group podiums and Kona. But instead of resurgence my Ironman competition came to an end. Safe to say the year did not go to plan.

The point of a season review is to answer the question why. In this case, why did I fail to make a comeback? The answer comes in two parts: firstly my training and how this was insufficient for my goals; secondly my motivations and the very relevant question of why a coach’s training was inadequate for those goals. Starting with the nature of this season’s training allows me to settle into the comfortable territory of charts and graphs. 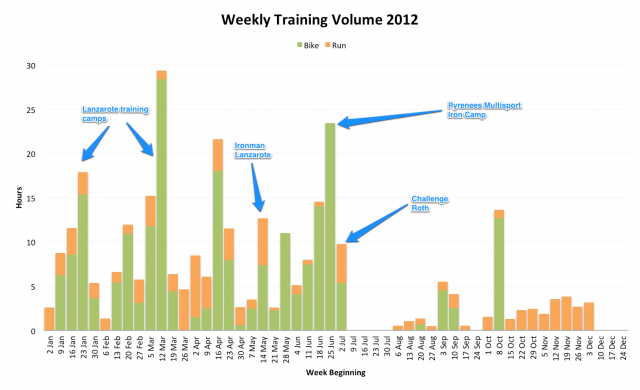 While weekly volume gives a simplistic view of training in this case it’s also very telling. The chart above shows the huge variation in weekly volume – a small handful of weeks around the 20 hour mark, more barely crossing the 5 hour mark. The sporadic nature of my training was far more significant than the relatively humble hours in comparison with previous years. There were periods when cycling or running appear to be building up only to be followed by fallow weeks wasting my fitness gains. As for swimming, it was rare enough I never kept accurate records and have left it from the chart. The Performance Management Chart below reinforces these point. 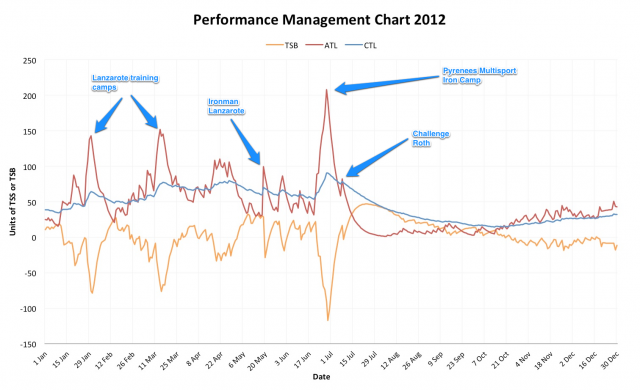 We see short periods of growth in fitness (blue CTL), generally corresponding with a camp, afterwards the gains gradually decline. I approached both Lanzarote and Roth at far lower fitness and with far less consistent training than ever before. The very simply answer as to why I failed to make a comeback is that I failed to adequately train. I don’t need to dig any further than this. I never attained sufficient fitness to train or perform close to previous bests.

Which brings me to the second and ultimately more pertinent part of the review: why didn’t I train appropriately? It took two hard Ironman finishes to make me realise the truth: I didn’t have the motivation. In hindsight it was obvious, I struggled from the start, but fooled myself blaming a lack of time or concerns over injury, neither had stopped me in the past. Without motivation my plans were doomed. Again I need dig no further than this.

There is little that can be learnt about training from this season. That inconsistency and low hours result in slower Ironman times is hardly a revelation. Neither should anyone be surprised at how important motivation is in the pursuit of a goal. Perhaps there is something to be said for how easily we – or at least I – can deceive ourselves about those motivations and goals; and how difficult it can be to recognise change and let go of the past.

I will end on a positive. This year brought huge changes in direction and it was inevitable that some things would suffer. Only the training was rubbish. Elsewhere in my life I have seen far more success which is why I’m offering two-for-one on annual reviews and next week will post a coaching review for the year.