In the early hours of January 1st, still under the influence of alcohol, I composed a post outlining my plans for the year ahead. It was – despite the quantities of red wine that fuelled it – grammatically sound and surprisingly prescient, but once sober I instead set myself what would prove to be unrealistic racing goals. Had I stuck to a plan of simply enjoying the sport I would have no reason to be so disappointed with my results. My athletic shortcomings have been sufficiently discussed, so I want to focus on the other half of those objectives, in particular my coaching.

If 2011 was about the growth of my business then this year was very much about consolidation. I finish the year as I started with a full roster of athletes and a waiting list (although I always encourage enquiries). It’s a reassuring position to be in, not least because consistent numbers means a consistent income; it also means there are limited opportunities to expand – the risk of taking on additional athletes is a lower quality of coaching and support, it doesn’t make sense to compromise the core of my business.

I’ve considered ways to diversify, offering additional coaching products and services – bespoke training plans and race analysis as examples – but have yet to fully capitalise on these ideas. Instead I’ve dragged my feet, never entirely comfortable with pricing a product for which I’m uncertain of the value nor of marketing it. I’d like to view the concern over quality as a positive attribute, but there are occasions when the self-employed might consider compromises in the interest of their business. That may be something to learn in 2013.

I have added a training camp to my portfolio next year and again the emphasis is on quality. I’ve chosen a good resort, kept the camp small and brought along additional coaching support. To my surprise it filled within a couple of weeks and again I have to offer a waiting list to those who enquire. If that interest is anything to judge by then there is scope for more in the future.

What really matters is the coaching and for the most part I’m pleased with the way the year has developed. I’ve helped athletes achieve personal bests, sub-10 hour Ironman finishes and in one case a Kona qualification on his first attempt – all positives on the coaching CV, but while I hope the majority fall in this camp, not all of my athletes had the successes they hoped for and as their coach I have to take responsibility. I’ve made mistakes and misjudgements, there were times when I could have been more assertive and times when I could have been more creative in my approach, I will try to learn from them. There is ample room for improvement, but the fact that so many have chosen to work with me for another year offers some reassurance that, for the most part, I am doing the right job.

Around September there was a dip in business when the Ironman season was largely finished and athletes had moved on. I’ll admit I began to worry that the demand wasn’t there, but a month later I was more concerned with ensuring I dealt with the rush of new athletes. That’s a positive start to 2013.

A Year of Coaching 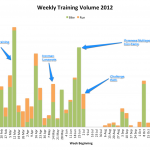