The Top 20 Age Group Ironman Performances of 2012 by Nation

I will admit I thought a post of the top 10 Ironman performances of 2012 would prove popular, but I hadn’t quite anticipated how popular. There is a very clear demand for Ironman age group league tables, athletes want to know how they ranked over the season and while the WTC limit their Age Group Ranking system to Europe the majority of Ironman athletes have no easy way to find their standing among their peers. Today I’m following up my top 20 age group performances of 2012 with the 20 fastest male and female age group performances by nation: 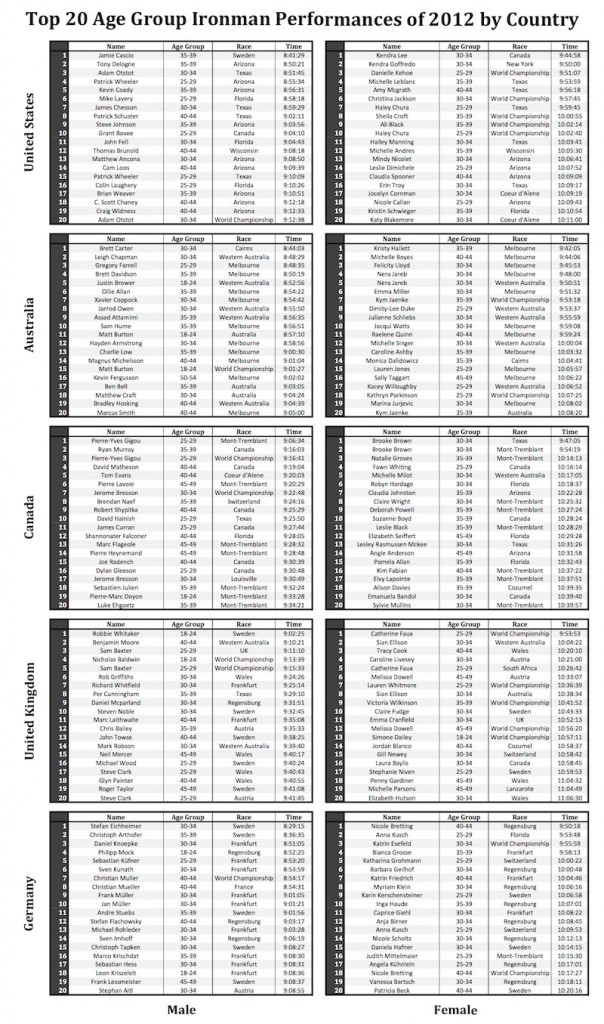 Some fast times, but before we start comparing nations we should remember that in considering only the finish time it is very hard to judge the true merit of a performance. Is a 9 hour Ironman in Sweden the same as a 9 hour Ironman in Arizona, or Melbourne, or Frankfurt, what about Lanzarote? There is no measure of course or conditions presented in this league, but then most ranking systems are only interested in finishing times. I am still working on smart ways to rank the Ironman races themselves in order of speed.

Being a stickler for detail I have produced a top 10 for each of the individual disciplines. To start, the top 10 Ironman age group swim performances of 2012 by nation: 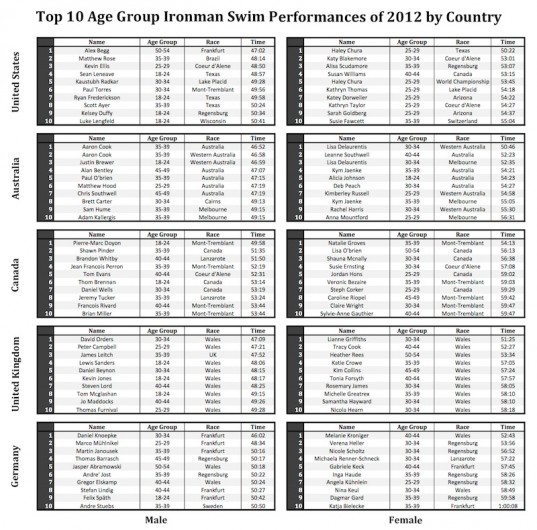 As before I made the decision to remove Ironman New York from the swim as the strong currents severely skewed the splits and would obscure the other top performances around the world. This is the only deliberate omission from these tables, in all other instances every race and athlete is present even when the course was known to be short.

Next the top 10 Ironman age group bike performances of 2012 by nation: 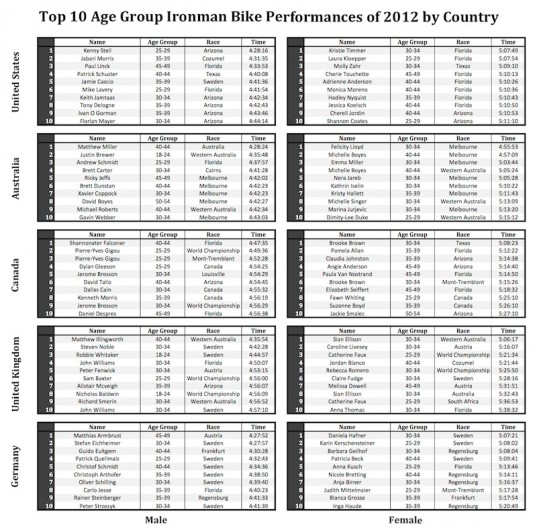 And finally the top 10 Ironman age group run performances of 2012 by nation: 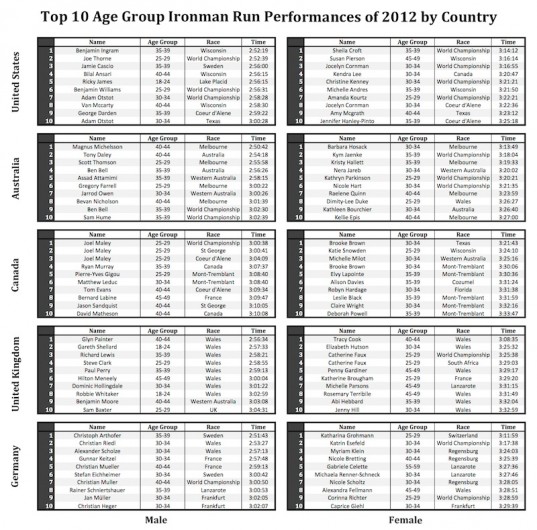 As well as identifying the fastest athletes these tables help to identify the fastest races. If speed is your goal Melbourne is clearly a good bet in Australia, Arizona or Florida in the US and Sweden or Frankfurt in Europe. For the Brits, Wales compensated for a slower bike course with a fast swim and short run resulting in it dominating those tables. Despite its profile Mont-Tremblant was a good choice for Canadians, but it should be observed that athletes tend to race close to home and Canadians only have two local Ironman branded events without heading south.

I have limited the rankings to the five biggest nations in Ironman – together America, Australia, Canada, Great Britain and Germany account for two thirds of all competitors – because with Christmas less than two days away I don’t have time to do more. I know this should cover the majority of my readers, but I’m willing to produce more: if you want to see the top 20 for a particular country let me know in the comments below. In the mean time, tomorrow I will have the top 10 performances by age group for those who want to know if they ranked within their division and then on Thursday I will present the top 100 age group performances with a more detailed breakdown of splits for those who really want the details.

Also produced from my Ironman results database is this interactive map of the world showing athlete counts by country and fastest, average and slowest performances by country too.