Of the two Ironman races happening this weekend Lanzarote is the one I am familiar with. Source of some of my worst racing experiences – it has, as far as I’m concerned, earned its reputation as one of the hardest Ironman events on the calendar. It’s the hills and the wind and the heat. Challenging at the best of times, but particularly following a long winter. In previous years I have put forward my thoughts on how to race there and also demonstrated exactly what you should avoid doing. This year I’ll have a look at the results available on Ironman.com (only 5 of the 21 years it has run) and see just how hard Kona qualification is on the island.

In some respects the distribution of splits appears unremarkable – a familiar curve skewed slightly towards faster athletes, tailing off to slower times. It’s with the bike that we need to pay attention, the distribution has a much heavier tail and it is shifted right towards far slower times than normal. Lanzarote is not the place for a fast bike split. The 2 lap swim is straightforward other than it’s hectic start, beyond the first turn buoy there is little need to sight and drafting is easy. The run benefits from being largely flat, although the afternoon heat and the tough bike that preceded it certainly make it a challenge. 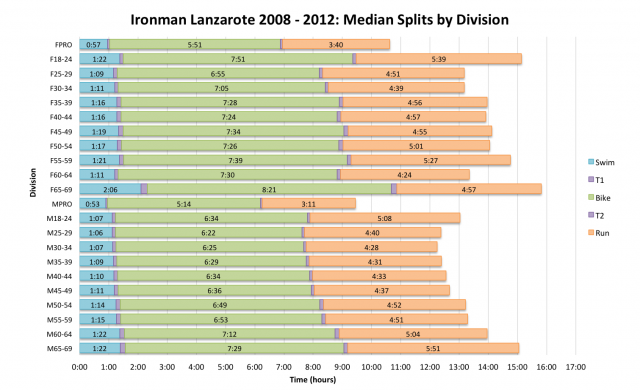 Individual age group splits probably do more to highlight the relative speed of the race. Perhaps with the exception of the swim these averages are slow by any standard. There are a few who perform close to the times of other Ironman events, but the majority lie in the tails pulling down these times. Nobody should enter Lanzarote chasing a personal best.

It is, of course, tough for everyone, so in theory Kona qualification should be no more difficult than any other race. Except Lanzarote only has 40 slots to offer which means that even the largest age group (not M40-44 for a change) has a relatively meagre allocation. If you’re a woman looking to qualify you should be aiming to win your age group. 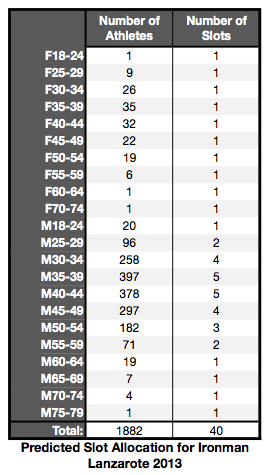 As you’d expect winning times are slower than at most, but they are not that much slower. By calculating the fastest, slowest and average finish times for the top 20 in each division we get some insight into the kind of performance required for a place in Hawaii. 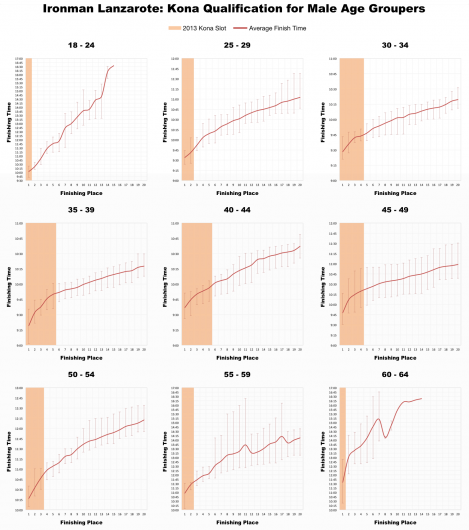 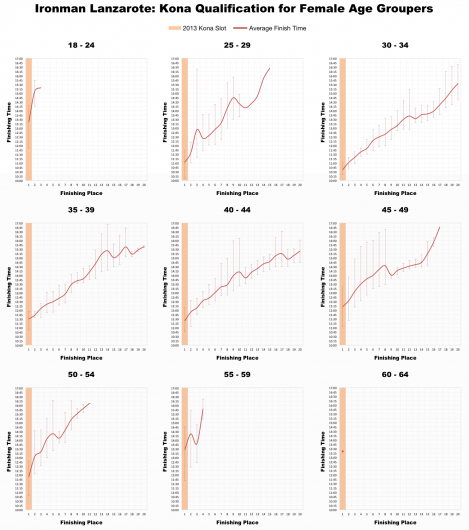 You will still need to break 10 hours if you are a man between 25 and 45, not an easy achievement on any course. It’s much harder to offer guidance for female competitors with winning times varying by more than an hour. Anecdotally competition is high, this is a slow race that always seems to attract some fast athletes, you need to be on your game. Not that chasing a time is a sensible idea – conditions on the day, particularly the direction and strength of the winds, go a long way to determining the challenge.

This is the first time in 4 years that I’ve not been on the island to participate or watch the race. I will have a few athletes there looking to test themselves against the course. For most it’s early season practice leading to goal races later in the year, even so I’ll be following the results especially closely at the weekend. 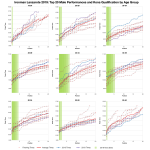 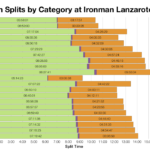 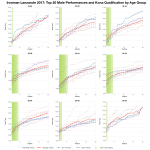 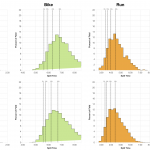