A Performance Analysis from Ironman Lanzarote 2013

Towards the tail end of the last season I reviewed one of my athlete’s failed attempt at a sub-10 race at Ironman Florida. There were a few mishaps on the day, but the performance was solid and controlled – just not enough to break 10 hours. So this year Paul targeted two races: Lanzarote and Wales (not making my job any easier). Fortunately he also acknowledged that while they’re both fantastic events they are not obvious sub-10 races. The goal for this season has become one of improving performance rather than chasing a time.

Reviewing his performance in Florida last year Paul and I agreed that while it may not be the most efficient use of his available time he did need to address the swim. His times were borderline 10 hour leaving little room for error on the bike or run. In Lanzarote last week he exited the water in 1:11, a new Ironman swim PB. A good result considering I felt the swim was slower than usual this year. The extra investment in swimming appears to have paid off; it’s a small return, but none the less an improvement.

Paul hasn’t just worked on his swim – this race also shows improvements in bike and run.

In Florida we targeted 220W for the bike, in Lanzarote we aimed for 240W. Although 220W was probably too conservative 240W was still a step up on previous racing, but a recent FTP test and practice during long rides gave us confidence Paul was capable of working at that level. As usual we also discussed the importance of keeping controlled, avoiding surges and pacing such that he reached Mirador del Rio with something for the journey home. 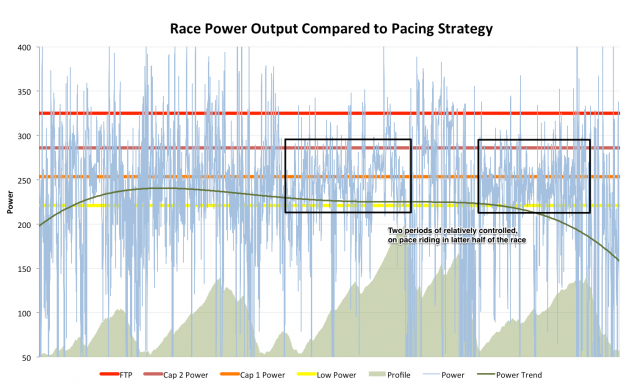 In reality Paul averaged 250W and surged a lot over the course of the bike. Early power output hits out towards his goal, but there is a trend down over time; a linear trend shows a very distinct decline from start to finish. In part this is the nature of the course, working harder on the climbs and power dropping on a number of descents. Paul might have gained something had he held back early in the race at least avoiding those surges, but it’s hard to put a figure on this. What is important though is that in that latter half, descending aside, there’s actually quite a consistent ride. The final, significant drop off in power is a direct product of the long downhill to transition. 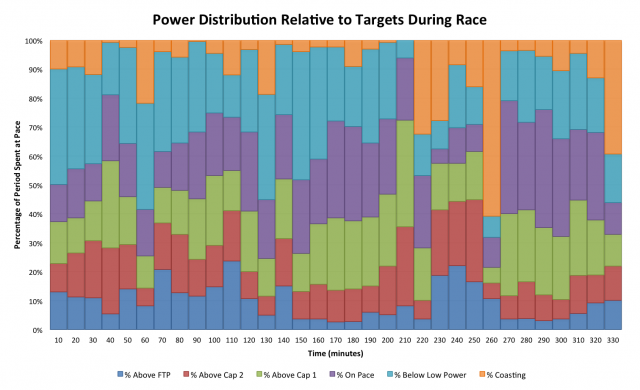 Looking at how Paul divided his effort over the race in the graph above reinforces the trend. There is too much time spent over FTP and his second power cap in the first half, but equally in the second half there are those two periods which show a more balanced pacing. While it may not be ideal to push hard to start Paul doesn’t appear to suffer significantly from it and has mostly tolerated the surges. Pacing is something he can refine, but overall the ride seems to have been within himself.

I’d have a very different opinion had he not also run well off the back of that ride. It’s not often you finish in Lanzarote feeling like you could have done more. 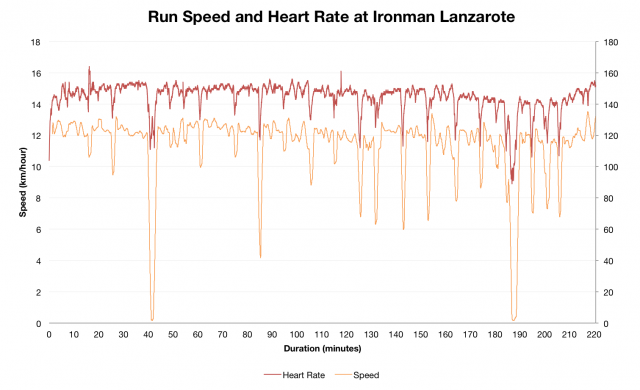 A nice consistent run with a minimal drop in pace over the entire marathon. There are signs that fatigue was a factor later in the race – breaks at aid stations become more significant, pace and heart rate do decline. Over an 11 hour day though this is hardly surprising and it’s rare to see an Ironman marathon that doesn’t show this general trend.

Could Paul have raced better? Probably, hindsight is a wonderful thing. There are potential gains to be made on the bike with better pacing in the first half, but what that translates to as a finishing time is hard to say – a matter of minutes rather than hours. Perhaps he could have put more into the run, but at the time it certainly didn’t feel like it. Overall Paul can be happy with the 10:47 result and the improvement in performance over his 10:21 in Florida last year.

Looking towards the remainder of the season and Ironman Wales we seem to have a training balance that works. Progress is being made and I don’t feel a need to adjust what we are doing.
It’s always worth revisiting race pacing, but we’d be practicing that regardless of Lanzarote. If Paul picks the right race in 2014 sub-10 should be on the cards.