The European Ironman season is at its peak, Sunday’s are spent on my laptop tracking triathletes. Having athletes in Ironman Austria and Challenge Roth has ensured a busy fortnight; when the race is over the analysis begins. Debriefings are a pleasure if the day went to plan, but when goals were missed it is a challenging and much more important process. I push my athletes for details, data, any information that will help me understand what happened. Answers aren’t always easy.

I had three athletes at Austria looking to break through the ten hour Ironman barrier. They regularly trained together; they were fit, hard working and good swimmers. The final month before tapering had inconsistencies, work and light bouts of illness interrupting training, but feedback said ten hours was a reasonable goal. On the day two comfortable beat their targets, the third suffered and fell short of our intentions. What led one to disappointment where his training partners succeeded?

All three started the marathon with the potential to go under ten hours, but one was unable to race as he trained. Their performance was a product of the proceeding six hours, events on the bike had determined their ability to run. The bike was the obvious area to focus on.

When it comes to analysing results the more data to consider the better; I want to relate details of performance to perceptions of effort. Many of my athletes train and race with power meters, the three in Austria were no exception. Once I received their reports and power data I set about analysing the race.

Despite the range of results their power data appeared similar, all three contained elements that might indicate pacing errors. Many factors play into Ironman performance so whilst I wasn’t surprised by similarities, I questioned why one athlete had struggled more.

I plotted my data from Ironman New Zealand 2010 for comparison. A good race though I felt I may have pushed the bike too hard, something reflected by the high percentage of FTP I held. However the overall trend was within my target power range and rose while heart rate remained stable. I ran reasonably strongly and finished well off the back of this ride. Not textbook racing, but the result had been good.

My overall impression was all three went out too hard and surged a little too much, with notable consequences in one case. Side by side it was difficult to pick which performance had resulted in the harder day; I didn’t have a solid grasp on what happened. I decided to consider the distribution of power in proportion to FTP – how much time had been spent working too hard? 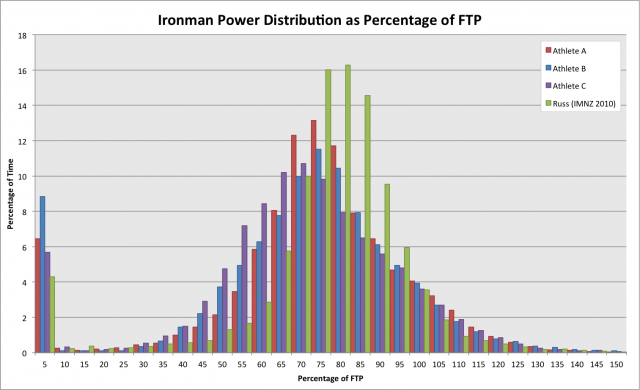 How hard I worked on the bike in New Zealand stands out; I believe the FTP values are correct, increasing mine would not overly impact the chart. But the main point was to consider my three athletes.

Although I’ve concentrated on power and heart rate I am well aware many other factors come into play. Performance in the water has implications for the rest of the race, but with all three being strong swimmers I felt its affect would be minimal. I have a stronger suspicion that nutrition played a heavy role, the two who broke ten hours are clearest on how much and how often they consumed calories. Greater awareness of fuelling potentially indicating greater overall management of race performance.

Pacing is clearly a challenge for relatively inexperienced long course athletes, especially those with ambitious goals. Mistakes are easy even with power and the results play out over the entire race. A conservative approach can insure a comfortable finish, but may not deliver the desired performance; on the other hand greater aggression is risky. Practice allows an appreciation of the feel of Ironman pacing – how easily it starts and how hard it finishes. It takes time to develop a finer sense of where the line is between optimal pacing and meltdown.

Studying this data closely has given me a lot to consider regarding race pacing. My guidelines to athletes need to be clearer and further emphasise the importance of nutrition and pacing. The rules aren’t strict and there’s room to support and athlete’s strengths; testing individualised strategies for more advanced triathletes would be the optimal approach.

On the day Athlete B was first to finish, pairing a fast bike split with a superb run. Athlete A followed, demonstrating a consistent performance. After fading on the bike Athlete C suffered through the run; he pushed on and made it across the line, all be it later than hoped. All three can learn from the experience and build on it in future races.