For the second week of camp I upped my game – the sessions are, generally, slightly tougher, but then most of the athletes have been through this before. Monday morning the wind also upped its game and was blowing as strong as the week before with gusts to go with it. It was obvious over breakfast this wasn’t going to be an easy day of training.

As before the groups split and I took our slowest rider, Kathryn, on a slightly different route to the others. So I don’t know much about what went on in the faster group other than the usual stories of who drafted whom. General consensus, corroborated by road time, is they had a tough ride. Not that Kathryn and I got off lightly – 80km with plenty of headwinds and a climb up Fire Mountain.

The official route for the day followed the Ironman course from Tahiche; so it started with a climb towards Teguise, turned short for the rough road at Nazaret and then went down the middle of the island before descending to Puerto del Carmen. From there it passed by Puerto Callero and past Yaiza to take in the El Golfo loop. The return was also over Fire Mountain then back through the middle of the island and down to Costa Teguise. It’s not an easy route, but with Monday’s winds was particularly hard – 110km in 4 hours is not a bad effort at all.

It’s also worth noting that a group of the athletes are running at 7am every morning. I’m glad I’m not having to join them this year! It’s nothing hard in intensity, but it adds to the daily load and helps explain why the group is tiring so rapidly. Definitely not something to be done on the rest day or the long ride day (I hope they are reading this and listening); running isn’t the emphasis of the camp and as the fatigue builds the quality is likely dropping. 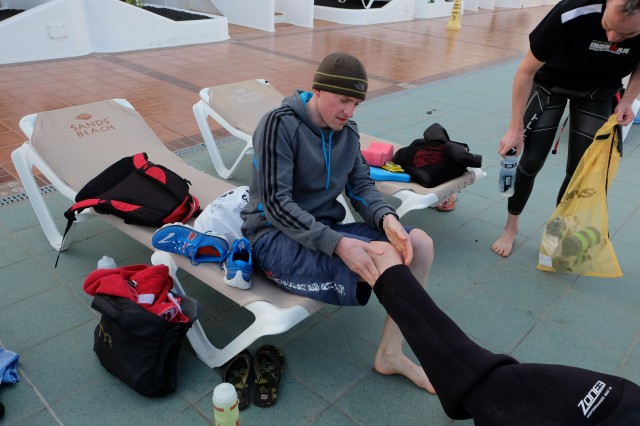 On the subject of fatigue one athlete in particular is showing the signs. So far on camp Gary has dived into the pool with his sandals still on and as in the picture above tried to put his wetsuit on over his clothes. Putting on a wetsuit is pretty simple really: first take off clothes, then put on wetsuit. He definitely needs to ease back on the easy day. 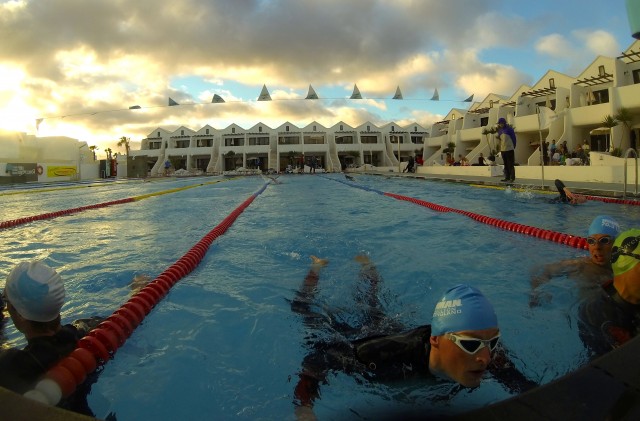 The day finished with the swim session as usual. The original set was 3.9K in total although few were in a fit state to complete this; lot’s of fatigue already after two windy bikes left little energy to survive a swim. Hopefully they’ll pace themselves a little better over the next few days ready for the 5K swim set we’ve decided to throw in later in the week. The session followed the plan below. 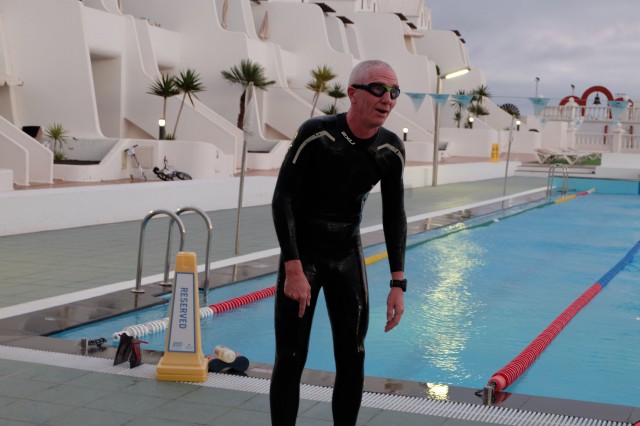 The plate count has started to rise at dinner, we can probably expect some weight gain (for the coaches that’s a given) over the course of the camp. It’s easy to overcompensate at an all you can eat buffet. Post camp will require a tapering of food back to normal levels alongside recovery. After dinner a group of us headed to the bar for a final drink before bed, there was enough energy left to manage that.