So now we’re into a routine: breakfast just before 8am, front of the hotel by 9:30 and out on the road. Not a perfectly slick machine, but getting closer. This is how the camp should look from now on. 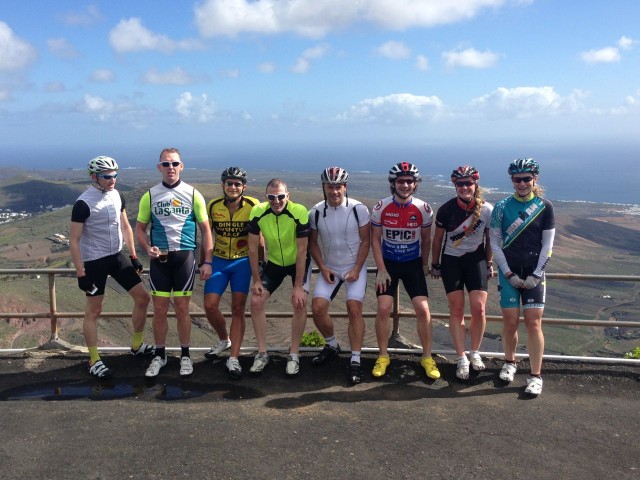 Today’s ride headed north taking in the major climbs on the island and also getting some experience of the winds. We rode up the hill to Teguise where we joined and followed the Ironman course through to the top of Haria. Some quicker than others. There was a short stop for a snack and photo opportunity before continuing on to the top of Mirador del Rio (with a minor detour from the Ironman route around construction work). The return leg deviated down to Orzola, missing some of the descent to Arrieta, but allowing us to enjoy the scenic costal highway with a tail wind on our backs.

Naturally there was an obligatory stop at the Arrieta petrol station for refuelling (my Magnum based strategy is increasing in popularity). With less than 20km to go we pushed through the final stretch along the highway. Formerly a favourite portion of the Ironman course where I could rely on my legs to work hard, but on this occasion my efforts barely lasted a kilometre before I backed off my pace. My own fitness and form has a way to go – it’s enough to be keeping up with the athletes on camp.

A good ride in good conditions – lot’s of sunshine and the wind still mild by Lanzarote standards. Speaking for myself my legs felt much better, perhaps because they felt so bad on day one! I’m not sure everyone shared that view, there’s certainly more fatigue building within the group. 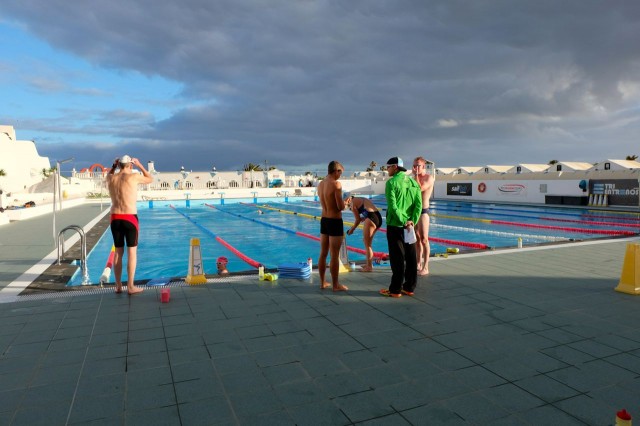 On our return a few went on a brick run on the trails to the north of the hotel; the rest of us rested our tired legs. Having returned by 1:30 there was a long break until the first proper pool session of the week at 6pm. We made sure athletes were there on time, even starting early. After nearly 2 full days of training energy levels were clearly a little low, but everyone pushed on through the set below.

After the swim was done there was a rapid 20 minute transition to dinner. Dinner itself has already become a much quicker process than it was on day one or two: about 30 minutes for 2-3 large plates of food. Necessary, we’ve a big day today with 130km on the bike, the option of a brick run and then another hour in the pool before dinner.

It’s breakfast time on day three and we all need to eat.