Noosa Triathlon a Race Report Vague on the Details

It was only a training race, I know, but I’d like some results! It started off with simple frustration that the timing company didn’t have the servers to handle the results. Then today, growing impatient checking online (OK I was busted breaking the no morning internet rule!) I went out and bought the paper. Noosa is a big enough event to make the Queensland news, the Courier Times actually prints out a full list of results.

The only reason I bought the paper was because when I scanned the 2:15 region I wasn’t there. I needed more time to check and felt guilty reading the paper so thoroughly in the newsagents. To be honest it wasn’t a well thought out plan, my clock time says 2:15 and it’s not wrong. That’d put me respectably in the top 200 overall so top 10% which isn’t too shabby all things given. But I have no detailed splits, nor proof to back this one up! Unless I’ve miraculously been added onto the website I can only go from memory. So the following race report will rely on rough figures and you’re just going to have to trust me on this one.

I started the day early, really early, 3:50 in the morning. I’d done a reasonable job of getting to bed early the night before, though not a great one. At least it’s the night before the night before that’s the important sleep they say. Everything was planned and laid out for the morning so I could get through brekkie and getting ready quickly. All went pretty smoothly, except for hitting the alarm button on the car keys rather than the door unlock. I can only apologise to any motel residents who might have been woken by the horn honks.

The idea behind such an early start comes from getting to the Gold Coast Half with my mate. Being a race TO he had to be there before competitors, being my means of getting to that race meant so did I. As it was it made transition and prep a very relaxed experience that morning. I figured I’d repeat that here, especially when you take into account a few thousand competitors. My expectations were long traffic queues to park up and get to transition. Turns out most people prefer to sleep in a bit longer, I arrived at an empty car park, got the first bus to the transition area and joined a dozen people waiting for it to open.

After about 5, maybe 10 minutes at most I’d done all I could to set up my transition area. This left me with about an hour and a half till my race started. That’s a lot of time to mill about. I discovered that I’d wasted my time bringing the wetsuit, the water temperature was 24.9C so no wetsuits allowed. I did all the usual stuff, eventually got changed down to just my race kit and dumped my bag off for after the event. The beach area where the waves started from was nicely laid out with plenty of fluids available whilst you watched earlier waves head off. Whilst a lot of waiting around was involved at least my race morning wasn’t rushed or stressful so in that regards a big success.

After a few waves had gone off we get to mine and to the actual race report. I wasn’t too phased by a non-wetsuit swim, I’ll admit I’m used to European races where there’s little question about needing one. That said I’ve always felt far more comfortable swimming without so the opportunity to race without one was quite exciting. I placed myself up front but too far to the right so as we funnelled down towards the first buoy the typical swim melee took place. Two or three more buoys down the line and finally people were spaced out enough to get into a good rhythm. I never feel I come off to well in the initial bun fight of the swim, but once the waters open up a bit I seem to move quite well through the field. I got out of the water in about 25 minutes, not spectacular, but not bad for me without a wetsuit.

The plan for the bike was to ride as hard as I could and gather up some good power data. The course is roughly 20k out and 20k back with a tough little climb in the middle of the first half. I knew what to expect from the climb, what I didn’t know about was the 8k of undulations that followed it. I was an early enough wave that I was lucky to avoid the famous Noosa drafting and never really had any run ins with any bunches. Come the turn around and it was straight into a head wind. The return journey is where you have the most to gain if you’re lucky enough to have the wind behind you. But not today, it was firmly in my face the whole way back so the pace dropped whilst the effort remained roughly the same. In the last 5K I did pick up a couple of guys who felt that it was easier to ride in my slipstream. Bike time was roughly 1:05 for 40K which given the 20km into a headwind, the climb and the only aero equipment on my bike being aerobars I’m pretty pleased with.

After a pretty messy T2, I really need to work on these, it was out on the run in my new Zoot shoes. It’s the first time I’ve run more than 5K in them and the first race. Unfortunately there were issues, the tight fitting size seems to lead to the front of my big toes rubbing after a while. I am going to experiment with the lace tightness to see if I can get my shoes snugly held at my heel as part of the problem is that being a forefoot runner I’m pushing my toes towards the front of the shoe. Currently though it doesn’t look promising for the longer distance events. Alternately a larger size may be the solution, but right now that’s not in the budget.

Along with the shoe issues my legs felt pretty dead for the first 5k of the run. I didn’t seem to be able to pick up the pace and had one or two twinges hinting at calf cramps (no compression socks this time). I suspect this was shoe related as I tensed my right foot before striking if I wasn’t careful. At 5K I decided enough was enough and just picked up the pace and held it through to the end. I remember reading some advice from Daniels that if you’re not feeling comfortable try going faster first as sometimes it works. This time it definitely did and I pushed the whole way home, really going for it in the last 1Km. That said I think the run time was disappointingly close to 40 minutes, quite slow for me. Perhaps the harder than normal bike slowed me, but I suspect it’s simply cumulative run fatigue.

Race done with a watch saying 2:15:18 whatever happens about official results! I had no idea then if that was any good, or any way to find out. Watermelon was on offer in the recovery area, otherwise you were limited to greasy food outside. Watermelon is pretty refreshing after a race, but something more substantial to go with it would have been nice. Generally triathletes are pretty friendly and so are Aussies so it wasn’t long before I’d chatted with a few others. I ended up spending the next 2 hours chatting with another guy from the Gold Coast whilst we waited for transition to open up. Long discussions about training approaches, thoughts on swimming, and possibly a lead or two to some good swimming coaches to contact round here.

Looking at the results in the paper my watch time puts me somewhere around the 182nd place, not sure of where in my age, but I think in both cases comfortably in the top 10%. Can’t claim it’s my best result, though there were a fair few elites and pros ahead of me. Still I’m not going to make excuses I would have liked to have been racing better, but hardly put myself in a position to race fast by training through it. You can’t have everything and my focus is maintaining a consistent training regime. Part of the expense of that is I’m not going to get to race every race fresh and ready to really go for it. However it’s amazing to see how being in a race so drastically impacts your performance over training. It would be hard to just go out and train like that on my own at the end of a big week’s training. Clearly it’s physically possible though. 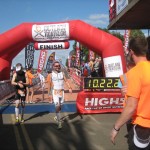