Evidently I’ve forgotten a lot in nine months. Racing the Outlaw Triathlon felt like my first Ironman – the pre-race nerves, the pressure and checking kit over multiple times. I was a rookie again, it showed throughout race day. Despite expectations to perform my mind wasn’t completely in the game.

The oversights started at breakfast – a bowl of porridge, eggs and a mug of strong coffee – fine apart from the lack of fluid. Driving to the race venue I became aware that I felt dehydrated, a single mug of coffee wasn’t enough. Arriving at Holme Pierrepont I focussed on setting up transition instead of correcting this. All I had were a couple of cups of water after I’d put my wetsuit on.

I was apprehensive. I made my way to the fastest start pen despite knowing I was a long way off the lead swimmers. Nerves took over; I held myself back, unwilling to place myself aggressively and get involved in the pack. My head still wasn’t in the race. It showed – I was unprepared and slow off the mark.

For a while there was a pack, but I soon slipped back. A lack of training – swimming felt hard. My mind wandered, negative thoughts dominated; I thought about dropping out and quitting Ironman, cycling appealed. Unfocussed I veered wide, it provided the wake-up call I needed. Back on track I settled into a rhythm, swimming wide and mostly alone, but progressing. I knew I was slow, I’d make up for it on the bike.

Exiting the water into a busy transition tent I had no idea of my time. Out of practice I fumbled through my bag not wanting to forget anything. Over the bustle I heard Tom Williams yelling at me to crack on with it; he was right this was a race. I dashed out of the tent and finally checked my watch – 1:10, slow. I grabbed my bike and stumbled to the mount line, I really was out of practice.

Once I was riding I settled. Aiming for my power targets I was surprised at how hard everyone was working this early in the day. Progress through the field was slow, I paced with a team rider for a while until the first hill separated us. Once the road turned up I was left behind as I kept my effort under control. I didn’t want to risk an early surge and places lost on a hill were soon taken back on rolling terrain.

The ride went smoothly apart from nutrition. Last minute purchases limited my options and whilst the High 5 bars tasted nice and worked in training, they were too sweet on race day. After three hours my stomach felt unsettled and feeding became a case of eating what I could tolerate. I used the opportunity to rehydrate myself and flush some of the sugar through my stomach, but it left me feeling bloated.

Over the three laps a couple of riders passed me and I paced off them until their efforts dropped, it helped keep me focused. I went too easy on the second lap and the third suffered from the increasing traffic. Once on the home straight I time trialled back feeling strong. Power numbers shot back up to my target and I passed a few riders in the final kilometres.

Reaching transition I was a little concerned I’d done too much, but once off the bike I went into autopilot. I started the marathon in fourth place, having biked myself well up the field. If I could hold a run/walk strategy for a 3:30 then sub-10 would be no problem. Of course the back of my mind was wondering if I could hold onto fourth place or even move up; at that point running felt good.

Forty minutes in and this was now my longest run in nine months – unfamiliar territory. I’d slowed a little, but still felt good. The first lap was fine, my strategy seemed to be working. Slowly my hips and knees ached, whilst my muscles felt strong the joints complained, unused to the repeated pounding. Walk breaks extended and by the end of the second lap I had to walk the length of the lake.

Passing the finish line for one more lap was tough. I’ve never DNFed and didn’t want to start, but I was questioning the value of seven miles of what could be mostly walking. Whilst I didn’t savour being out there that long the idea of a DNF was worse. I spurred myself into a jog. It lasted out to the river path before I was forced back to walking, with a few miles to go I no longer cared.

Receiving my final lap band was all the motivation I needed to pick things up and I ran the last couple of miles at a more reasonable pace. Why couldn’t I do that seven miles before? That was it, time to get the job done. One last, slow push and the race was over. 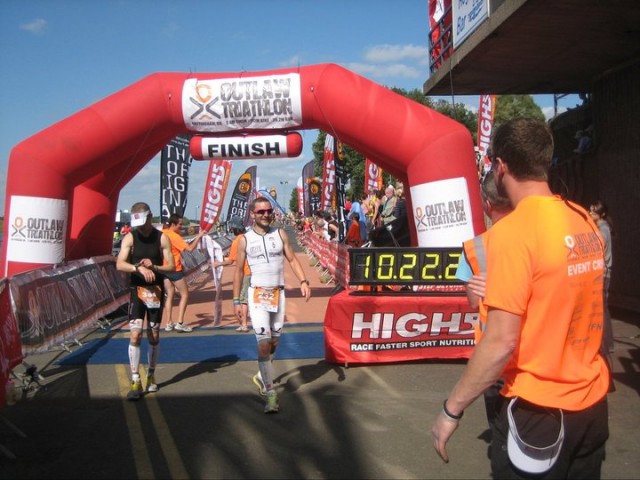 I’m glad I raced and enjoyed the experience. I needed to get back out there and test myself, it had been too long. The work on the bike is paying off, but there’s much more to be done; the rest was in line with preparation. A positive is the run technique work helped keep me injury free and if there’s an advantage to a slow marathon it’s the faster recovery.

Not long till the next race, better work on my swim and run.