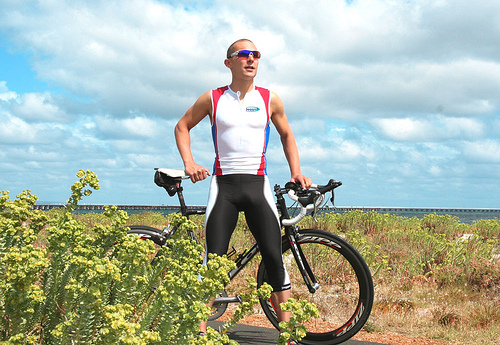 Five days since the race and so far all I’ve done is swim about 500m. This was whilst having some swim analysis done by Paul Newsome of Swim Smooth. Having yourself filmed as you swim has to be one of the most useful things you can do for your swimming. Even without the insight from a coach I could see some of the problems with my swim. Pleasingly there weren’t massive issues, but I’ve got some drills to work out to correct what problems were there. It’s amazing how a few minor corrections tidy up a whole bunch of interconnected issues. I’ll be working on these drills and focussing on Paul’s advice over the next few months. Hopefully combined with the high swim volume I can cement myself into sub-1 hour Ironman swim territory (55 minute swims please!)

Aside from this I haven’t really had the time to train. I’ve had the inclination, at least when I got back to a beautiful sunny day on the Coast yesterday. A ride would have been great, but my legs still ache a little too much. I did manage to fit in writing up two race reports, one for Tri247 and one for Jaggad. Mostly though my time has been spent travelling, a brief stop off in Perth for that swim analysis, to catch up with friends and see a little of the city. Then back to the GC and move into my new place. I think it’s going to make a good base for training. There’s a good yoga place not too far away, opposite the dodgiest looking motel I’ve seen. Not far from all my usual rides or run routes and a very short walk to the beach!

Perhaps more dangerously it’s only a 10 minute walk from the Cheesecake Shop! Which brings up the topic of indulgence. This week I’ve let myself eat largely what I like, which does include quite a bit of cake. I’ve tried to keep things healthy, but let treats in as much as I could too! Whilst next week is still recovery, then plan is to start getting things a bit more under control. I will be making a trip down to Sydney for a few days to catch up with old friends. I’ll be staying at the same place I did last year which means I’m very near a cafe with the best coffee and cheesecake I’ve had! Fortunately I’m also off to the bush for a night’s camping when cheesecake will not be on the menu. In fact the menu may depend on what we catch.

Once all this is done I’ll be back from a 2 week break from strict training and it’ll be time to get back into the swing of things. Christmas is no excuse not to train so I’ll be building myself up to my basic week over a couple of weeks and then repeating that until Epic Camp in New Zealand. Hopefully I’ll go into that fitter than last year and without the illness that plagued me. I want to see what I’m capable of managing this time, hopefully without detonating! My schedule may alter then and I’ll opt for another training trip in February instead of Jervis Bay and the Australian Long Course Champs. Which will bring me back to March and the final build and taper for Ironman Australia. Doesn’t seem that long now I type it out.

Rather than bore you all with the mundane life of a recovering athlete I’ll keep this one short. The picture at the top today is one from the Jaggad photoshoot. It and some of the others will be used on their site in the future. It’s at the very least a good reason to go browse it or better to go buy some of the kit with a comment you only did so because of how good it looked on the model! Just saying… I’ve also put the pictures on my flickr account and in facebook for those who might want to see more! As the next few days won’t bring too much news I’ll be planning some training based posts until Sydney.