I’ve been so busy this week I’ve not had time to blog. Ok, that’s a big lie. I have had one of my laziest weeks in a long time and not much to write about! That little ITU event has taken some recovering from that’s for sure. The small bouts of training I have done have generally left me far more sore than expected.

With various comments about getting some rest and racing well in Ironman Western Australia I succumbed and backed down the training plan. It didn’t take much to tempt me. My plan now revolves around getting back to things when I arrive in Busselton on Monday. I’ll have three to four weeks to prepare myself well. I’m not going to develop real fitness, so get myself in form, back to race weight and ready to go.

I’m not going to bore you with details of time spent in coffee shops or the movies and TV I’ve seen. Instead I’ve video from another swim analysis session with Paul Newsome. He coaches the Perth based Team Core club and also runs Swimsmooth. Based on last year’s session I’d worked on technique and felt I was swimming more efficiently. Admittedly no faster! I wanted to see whether my work had paid off at all and get some idea of what to do next. I want to break the hour for the swim in Busselton to set me up for a fast race after all.

Overall things had improved. The errors were largely similar to last time, but reduced in magnitude. I still have that little flick kick out to the left when I’m letting my left arm touch across the midline. Also my left arm tends to catch straight and gets a poorer hold on the water for it. I’l be revisiting some balance drills a lot along with a bit of doggy paddle to work on these elements over the next month. The emphasis is on getting that left arm catch right.

Aside from more technique work I gained a new toy. A Wetronome. Basically a timing device I can use to help work on stroke rate or to help me work at pace. It’s pretty simple, basically a programable beeper that goes under the band of your goggles. You set it to beep to a certain number of strokes per minute or a certain number of seconds. The former is great for making you work at a particular stroke rate, whilst the later can be used to help pace an interval set.

In terms of stroke rate I seem to naturally work at around 60 strokes per minute. We did an experiment using the wetronome to try some other rates. As I’m wanting for content I figured I’d publish the results!

This works to a point. The jump to 80 strokes per minute was too far for me. At this point it’s much harder to maintain my stroke and perceived exertion shoots up. You can see this as my stroke count goes up more so distance per stroke is falling further. I definitely couldn’t sustain that effort for any length of time.

Whilst technique is one thing I’ll be working on, learning to swim at a higher stroke rate is another. Training to comfortably swim around the 70 stroke per minute mark is potentially 5 or 6 seconds gained per 100m! That would be massive over the Ironman distance. Of course whilst it’s easy to hold a higher stroke rate over 50m it’s going to take time and work to hold it over 3.8km.

Which brings me to the final piece of swim training I’l be focussing on. It’s something I honestly knew I should be doing, but haven’t much since leaving the Gold Coast. Threshold work. I need to be regularly swimming at my threshold pace to raise this up and improve my ability to swim hard for longer. Right now I do far too much easy swimming, which is great for endurance, but does little for speed.

A big part of the Busselton training plan is swimming. Plenty of open water sessions round the jetty for endurance. Plenty of time in the pool to focus on the drills and that threshold work. They’ll be a couple of threshold sessions, a couple of technique session and some stroke rate work every week. Hopefully it’ll translate to a good swim in December. Over the longer term I’m looking for bigger improvements for my 2010 races.

A topic for another post is how I see threshold work as an increasingly important part of all my training. I’ve logged many hours and made great gains in fitness and performance. The next step though needs me to work that bit harder still. 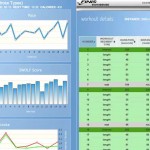 Guess I Better Keep Working on the Swimming