I’ll start with a brief lesson in the importance of attention to detail. This may not apply to you, but it’s something I need to learn for sure. When I got back from Western Oz I put the bike back together as usual. Then it’s a couple of easy weeks, kick back, not do much, certainly not on the bike (well except one hard ride, that was dumb too!) So there we are, time to start training and time to stop all that eating! Hit out on the bike a few times and you know this is a bit uncomfortable must be because I took that time off.

After a couple of weeks of sore hands I think maybe I’m not having to get used to spending hours on the bike again. Sure enough when I spend a little time and check my bars are tilted down a degree or two too far. That was it, adjust and no more sore hands! This would be fine if it didn’t take me another week to adjust the saddle angle to stop it digging into my right thigh so much! Or then a few more days on top to finally accept that the vague sensation that my saddle is too high is because it is too high. So now the saddle is 3mm lower and riding is a bit more comfortable. The bike is back where it was for months before and I no longer have to adapt!

The lesson: if find your recently reassembled bike doesn’t quite feel right it probably isn’t set-up right. The correct response is to spend the 5 minutes or so it takes to fix this and not to try and work through it!

Having let myself have a day off and properly put the bike back together I’ve been getting myself into a nice, big week of training. So started out with two solid 5 to 6 hour days with a bit of all 3 sports in then got to the high point of the week. My big day out was a 8:15 ride followed by a 45 minute run to make a nice round 9 hours total. There was supposed to be an hours swim in there first thing, but poor sleep this week made me take a little lie in. I was still up around 6, but used the time to get in a big, big breakfast. I figured I’d be needing it with the day ahead.

My rough plan was to ride down to Byron Bay then make my way back. Byron Bay is a destination beach, everyone goes there. You find this when you hit the queue of traffic on the turn off to the town. I visited last year, riding down, but getting a lift back. It was a trip notable for a lot of rain, dreary skies, and not one dolphin sighting despite assurances I’d see them. Yesterday however was another perfect day on the coast so I headed out to blue skies and sunshine.

The trip down the coast went quicker than expected. Aided by a slight northerly and the fact I wasn’t entirely sure how far Byron Bay was. It was also as rough as usual thanks to the casual Aussie attitude to road surfaces. The roads are quiet, the views spectacular, but they’re rough as. The equipment toll to the constant vibration and rattling has been spectacular so far. I wonder if I should be worried about the really loud creaking the bike makes when I climb out of the saddle! I arrived at Byron having suffered a slow puncture on route, but that’s about 1000km since the last one so I’m doing good!

With 5 hours still remaining on the clock and having stocked up on Coke and chocolate at a servo I took the long route back. This partly involved more of those rough roads, this time with a strong headwind that began to get on my nerves. Around about this point of the ride I had a small insight into my psyche. The ride time was reading about 3:40, I was pushing some decent power out into a headwind along the Tweed coast road. My legs hurt a bit as they pushed a big gear and were continually battered by the bumps in the road. I started to experience two sensation, firstly I was feeling quite hot and thirsty in the sun and secondly I needed to pee. Pretty simply solved right?

Well you’d think so anyway. I had three choices of fluids to deal with the thirst – some flat and now warm Coke, a small amount of rationed water and a bottle of Gatorade in my back pocket. The Coke wasn’t going to work that’s for sure, too sugary. I didn’t want to hit the water for a while so it would be the Gatorade. The thing is the bottle is still sealed in my back pocket I’d need to stop to open it as it’s a twist cap. But I need to stop to pee anyway right? It’s still pretty simple. The clock ticks on and I refuse to stop because I’m going pretty well and soon it’s 4 hours on the clock and I promised myself I’d just keep the effort up till 4. Only now we’re on the rough, hilly road to Mooball with a warning that there’s crop spraying ahead which doesn’t sound pleasant. I decide to push past this before I stop.

Except there’s no crop spraying happening and I’m still going, still thirsty and if anything need to pee even more! I’m pretty sure I’m past any potential crop spraying, but still now I’m getting picky about where I stop! I still prefer to be a little discrete about where I stop and piss at the side of the road. This is despite the fact that inevitably stopping for a pee break seems to attract cars to the quietest roads. So I’m hot, thirsty and in need of the toilet, but won’t stop until I find a good set of bushes. Of course I then hit a couple of towns which pretty much eliminates any chances of relieving myself for a while… 25km after I initially decided I needed to deal with the issues I stop and finally have the much needed drink. It’s a further 2km before I find somewhere suitable for the call of nature!

I think I learnt new things about my stubborness/stupidity. I think we all learnt I’m willing to pad out a post on the thin topic of urination!

To end an overly long story. I finished the overly long ride strongly and pretty satisfied and was even pleased to find a 45 minute run didn’t feel that bad after all that! It is all relative though. Since then I have been and still am very hungry. Today is an easier day though, I shall go for a leisurely ride in a short while, perhaps even stopping for coffee and cake (I am really hungry). A 5K swim set in the arvo to make up for missing it yesterday than finish with an easy hour of running. Then hopefully a decent night’s sleep tonight as that didn’t happen last night despite the effort of the day. Actually I think I was too hungry to sleep well, woke in the night and had to have a snack and then woke needing breakkie pretty early too!

On that note I’m hungry, must find food 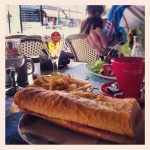 Eight More Days of This? 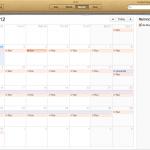 Another Thirty Days of Running 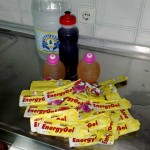