Another Thirty Days of Running

I’m not exactly sure when I was first introduced to the concept, I think it was during a month long training camp on Lanzarote back in 2009. Following a disastrous race I returned from the island willing, or perhaps sufficiently desperate, to try anything in the pursuit of better performance. Many changes followed, it would be hard to pin subsequent successes on one, but thirty days of running remains strongly associated with a breakthrough. A simple idea: a handful of rules necessitating consistency. 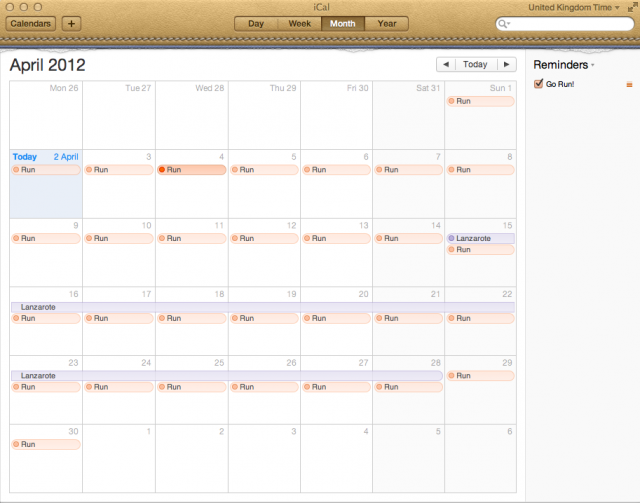 Thirty runs of at least thirty minutes in thirty days.

The appeal was obvious, I liked the rules, I liked the simplicity and I liked the symmetry around thirty. I knew there was nothing special in this number, it was an arbitrary choice, about a month of regular running without interruption. Focussing on frequency, its significance came in the form of discipline, demonstrating a willingness to just keep training. Tired, hungry, wet or miserable – I would still have to go out and put one foot in front of the other. But there was nothing to stop me running further or faster should I feel inclined.

Of course I adopted a hardline approach: I had to run – or at least run/walk – every day and it had to be for at least thirty minutes. There was no banking extra runs to earn a break, I could run once, twice or even three times in a day and I would still have to run the day after. There was no dividing the time, I couldn’t top up a twenty-five minute run in the morning with five minutes in the afternoon, thirty continuous minutes, one after the other. There were no free passes. Break the rules just once and the game was over. Awareness of the impact of training became heightened, the choice to train harder or longer having added implications in light of the need to be consistent; the benefits of frequency and consistency balanced against those of intensity and duration.

Challenges are part of my motivational repertoire – trying to go further or faster, or increasing rank on a Strava segment; chasing small milestones on the way to bigger things. Thirty days of running laid out a new template that came to define many periods of training; not necessarily optimal, but whenever motivation waned, effective. Forty kilometres of swimming in a week, fifteen in a day, forty days of cycling, or riding the length of a country in two weeks, the same pattern – a given workload in a given time. Simple, easily measured targets – how far, how often, or how long – no real pressure, just switch the brain off and train.

The concern, of course, is of injury or perhaps junk milage. Certainly injury is a genuine risk, any form of excessive overload can present it, and potentially this is excessive. I jump into a challenge carefully, when I feel I am ready, I measure out my effort over the timeframe, and I accept that at any sign of injury I will abandon my goal. And junk mileage? Sometimes the training is slow or easy, but it can be hard, or long, or any other combination that strains my body. There are quality sessions, and then on the days when I might have rested, I train again. There may be more effective, more targeted approaches, but when I am becoming bogged down in the minutia of a plan, this works – I can simply enjoy training; a few sessions that some might term ‘junk’ is a small price to pay for the overall gain.

So the first of April – a month of thirty days – in a year when, lets be honest, my motivation is not at its peak is the perfect time to play the game once more. Thirty runs of at least thirty minutes in thirty days. I will run every day in April, even a second weekend of birthday celebrations for my girlfriend didn’t stop me completing run number one; it was slow and I did have some concerns about my stomach, but I started as I mean to go on.