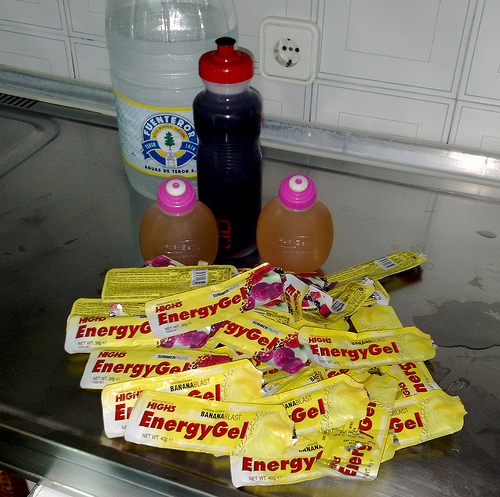 Sorry this has got bumped and bumped as I go through my final race prep the past few days. That’s despite yesterday being a full rest day, somehow I didn’t get round to blogging. So now the day before the race and just a quick one.

I think I’m in much better shape pre-race than I was in Oz. I’ve tried to recollect exactly how I felt prior to my last two races, but they’re already distant memories! Still my impression is this feels more like the day before Western Oz than Port Macquaire. If things follow from that on race day tomorrow should be good! I’ve got much more training in this week than prior to Oz, don’t feel so lethargic and am ready to go.

It’s not 100% perfect, but nothing ever is. Let’s just say I have a bit of a saddle sore issue that is genuinely uncomfortable. Even to the point of being noticeable walking and sitting normally! I’m beginning to wonder if it’s more than a saddle sore, but it’s too late to worry now. My test ride this morning confirmed it is painful, but careful placement on the saddle avoids the worst of it. I doubt you wanted to know much about that one though!

The weather reports are looking good. Light winds building a little over the day, perfect for fast times on that course. More importantly I don’t have to worry too much about handling issues with a deep rimmed wheel up front. Oddly I had a southerly for some of this mornings test ride. Though I think in this case with such a light north-westerly the offshore breeze becomes predominant here. Anyway, things look good. It could well be a hot one with lighter winds, but then I like the heat!

The race plan! Going to get through this one quickly. For the swim I’ll place myself on the front right to avoid getting trapped with the bulk of swimmers. I’ll have the option of free water if I feel I need it or can stick to the group for a draft. I’ll be swimming fractionally longer than those on the left, but it’s negligible. I aim to avoid going out too hard and blowing up in the swim for a start! The aim is a comfortable 1 hour for the two laps.

Transitions are long so I’ll allow 5 minutes for each. Nothing of note to happen in them, so onto the bike ride. The plan is to ride conservatively keeping a comfortable pace. It should feel a little too easy at first and for a few hours in. I won’t go overly hard on any of the hills as they occur to early and you’ll gain relatively little for a lot of effort. If I feel good between Haria and Mirador del Rio that’s the time to think about going for it. In fact after the descent off Mirador del Rio, there’s no more thinking, just go! Hopefully the wind will be on my back and I can fly along the highway.

Hopefully by not going too hard at first I’ll have plenty of energy to start moving up the field in the latter half of the ride. Nutrition strategy will be as with previous races – a bottle of gels (see above) and a couple of energy bars. I would like to see a ride in the 5:30-5:45 region, the quicker the better though! Then it’s 5 minutes again for transition 2.

The run is 4 laps which whilst not that exciting at least works towards easy pacing. I’m feeling happier with my running than I have in a long time. So hopefully I’ll see something good one the day. My focus of late has been a high cadence and good running form. The aim is lots of smaller leg movements that cost less individual, but sum up to move you faster. Generally this approach is less prone to collapse from fatigue later on. To the point the run goal is 3:05-3:15. Yeah, once again, faster than I’ve aimed before, but I believe in my reach. That’s around the 47 minutes a lap mark, something easy to track on the watch.

Run nutrition is yet more of those gels (see above again). I will be sick of sugars by the end of the day. I think I should have enough for the whole run this time and won’t run low later on. Regular sipping of the gel bottles before water at the aid stations, avoiding the coke this time. I like coke, but it just isn’t flat enough not to upset my stomach generally.

Final lap I go for it! High cadence and good leg lift, the aim is to put in a big push at the end to grab those last few places. Let’s hope I actually feel up to that come the time, it’s really easy to type! Ideally that leaves me finishing somewhere around the 10 hours mark. I’d love to be below 10 hours, simply because I can keep saying I’ve never done an Ironman slower than 10! We shall see. Far more important than that is I want to book that Kona slot.