Two days rolled into one as the amount of lounging in my hotel room I’ve done lately makes for a much shorter blog. We’re almost there now!

So this morning’s swim was my first time in my PointZero3+ swimskin. Fortunately it doesn’t take quite as long to put on when you’re not hot and sweaty. It’s still damn tight and a fair job to get on. Despite the struggles I think it was worth it. I had a great swim on the way out to the usual shipping buoy. Felt really good and think I got there quicker than usual. Suit or tide? I don’t know if I could say, but I’m happy to have it for the race. Thanks again to My Sporting Times and Blueseventy for sorting it all out for me.

A brief chat with a bloke from Melbourne and then I headed back in for shore. Skipped the Coffee of Hawaii boat this morning to avoid having to cross the heavy flow of triathlete traffic. Swimming early once again ensured I avoided the worst of the queues for the showers and changing rooms. I hung around waiting for Roger and Steven to turn up. It turns out they’d spent an extra half hour out there with a large pod of dolphins! Somehow I manage to miss all the wildlife! 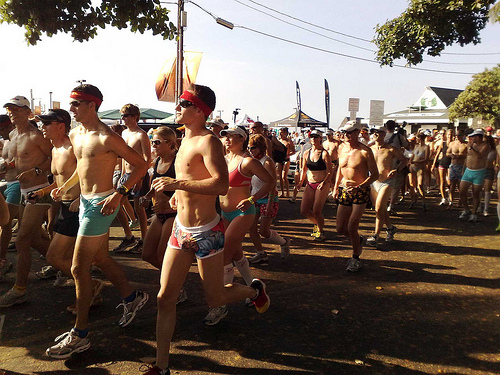 I didn’t miss the Underpants run though. Not that I participated, maybe next time. A whole bunch of triathletes running about in underwear (so not that different to usual) and these days compression socks. Quite a sight and all part of the race build up these days. Seems to go down well with the locals too.

Breakfast and coffee at Splashers and then I headed back over to the ART tent to get some more massage. I thought I’d see if I could get them to do a bit more work on my leg and maybe on my shoulder too. For a free service they were incredibly accommodating and I spent an hour receiving treatment. After two sessions I’m liking ART a lot, it does seem to be quite effective. Unfortunately it’s not something I’ve encountered outside of this Ironman. From what my masseur told me it hasn’t expanded much outside of the US yet.

I got him to work on my calves and hamstrings which always seem to be tight. With more discussion and as he checked my muscles I ended up having ITBs, shins, feet and ankles done too. Then another guy worked on my right shoulder which is always a little bit tighter and can sometimes click. It was quite relaxing and seemed to ease off some of the tightness. Then a slow walk back to my hotel room to relax for a while.

The only time I left the room for most of the day was to pop up to the supermarket to rece items for race day breakfast and to pick up the obligatory chicken. It’s become such a staple of my diet now. I can see myself living on chicken breasts and salad for the next year! Worryingly my credit card was rejected. Hopefully just a one off I’m starting to get low on cash out here and trying to avoid drawing more dollars. Kona isn’t the cheapest trip in the world it has to be said, but so far it’s been worth it.

I was really taking my relaxation seriously today so after lunch I dozed for a while and listened to a few podcasts. Then decided it was time to get ahead of the game on setting up my bike and equipment. It’s all set and race ready now. Race tyres and tubes – Michellin Pro Race 3 with latex inners. Checked all the gears on the Zipp rear wheel cassette and they seem good. Bike labels on, saddle bag packed up, hand pump removed and I think I’m good. Typing this I just remembered I do need to adjust the display options for the Garmin!

Being a little bit OCD at times I’ve also laid out my race day bags and piled the items I’ll likely need in each one or at each stage on them. What this should mean is tomorrow once I’ve done my swim and test ride and similar I’ll not need to do anything more to get ready. It’ll be a case of more lying about, a little bit of food shopping and some sleep I think. If I learnt anything from Wednesday it’s keep myself off my feet now. 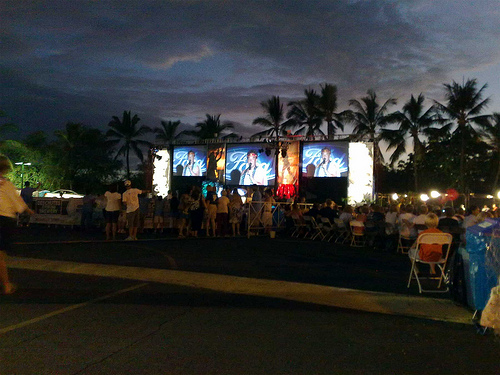 The day went by pretty quick until it was time for the Opening Banquet. Just over the road from our hotel conveniently. We headed over early, easily got seats and got straight in at the buffet. A couple of very paleo plates later and I was stuffed! The show was pretty good with lots of displays of traditional dances. Followed by a mix of Ironman event stuff. The new race at Regensburg looks very good. Seeing Brit Philip Graves up there as the youngest competitor was great too. I don’t think too many realise that the UK is a slow course so a winning time of 8:45 was pretty impressive.

The ceremony finished and a mercifully brief if not particularly informative race briefing followed. They sped through details about the entire race, but there was really little over and above what was in the booklets. I was pretty tired by then and glad to head back to the hotel and bed.

The last day of preparation and I started off efficiently getting myself down to the swim and in the water by 6:30. I headed out to the half mile marker and back swimming nice and easily. Then it was a quick change and off to the ART tent once more. A good session on my legs where I was reassured that they were feeling better than the day before. All I can say is hopefully they’ll be better still tomorrow!

Then it was time for the final relaxed breakfast at Splashers. All the usuals and a chance to chill out before racing tomorrow. I’m pleased to say that relaxing made up most of the day again. I headed back to the hotel and lazed for a short while before heading out for a final check of the bike. Twenty minutes of easy riding later and that was done. It was on with the race shoes for an even shorter run. Ten minutes later and I’m happy that a) my legs are working fine and b) my shoes still feel comfortable. 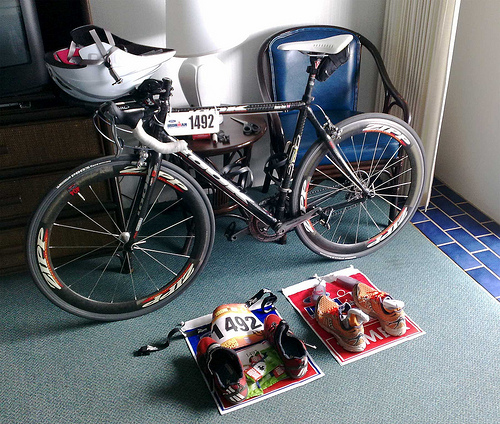 All done I cleaned up and laid out my race stuff all ready for check in later that afternoon. These things always take far less time than you imagine so I really had little to do! If anyone wonders why I’m so active on Facebook or Twitter, there’s why. I popped to the supermarket to sort out race day brekkie. I’ll be going for a bagel with some cheese, jam and a bit of chicken. Probably a powerbar too. That should be plenty to keep me going, especially with a top up of a gel or two before the swim.

One advantage of my hotel location is tomorrow morning I can get up, eat, get the basics ready and head over for body marking/transition set-up. That shouldn’t take too long to do and then I’m back to the hotel to lie down for an hour and rest/doze (with an alarm set of course!) Then I can do final checks and stuff before heading to the pier for the swim start. All very relaxed and easy. Hopefully! 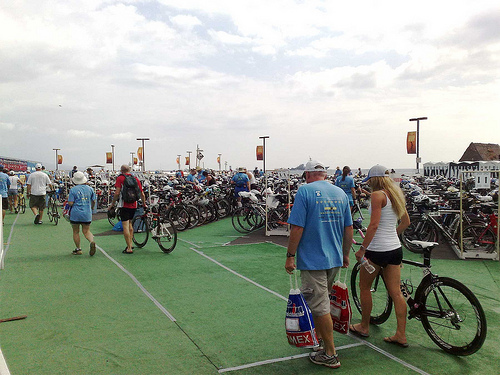 With check-in looming I headed down a little early and was surprised at how there was no queue. I walked straight in through the checks and then had a personal guide for my racking. It’s all really well organised and my bike was soon in place along with my two bags. I did a last check that everything was in them that I needed. It all seems too simple! You have to convince yourself you’ve got all you need.

I went for a little wander at this point to get some bodyglide to minimise the swimskin induced chafing tomorrow and to treat myself to a nice Vanilla Macadmaia Nut Coffee. Once more the coffee came with an enquiry about whether I wanted a tattoo or not! Then it was back to the hotel to put my feet up for thirty minutes before an early dinner.

Dinner is done and the evening is coming. It’s still early, but I’ll start thinking about bed shortly. Hoping for a good night’s sleep so I’m well rested for race day. It’s hard to believe it’s finally here. All the work to get here and just one more night. In roughly twelve hours time things will be kicking off. I’ll give it the best shot I can and see what happens. As my first time more than anything I want to finish and enjoy the day. On the way to that I’ll race as hard as I can!